Spoiler Alert: If you haven’t watched the Fruits Basket TV series or read the manga, beware of spoilers!

Fruits Basket tells the story of sweet-natured orphaned high school girl Tohru Honda, who is given a home in exchange for doing the housekeeping by novelist Shigure Soma and his two younger cousins Kyo and Yuki, who just happen to be in Tohru’s class at school. The Soma family have a secret: twelve of them harbour the animal spirits of the Chinese Zodiac and when embraced by someone of the opposite sex, transform into that animal. Yuki is the Rat and red-haired Kyo is the Cat – and when Tohru discovers (by accident) their secret, she has to be sworn to secrecy or have her memories erased and leave the household. As Tohru’s benign influence spreads within the Somas, she finds herself irresistibly drawn to bad-tempered Kyo who, as the cat, has to endure being the family scapegoat and harbours a terrible secret. And he, in spite of himself, is also drawn to her even if it seems that their love can never be fulfilled. But Tohru is unaware that Kyo knew Kyoko, her mother, and is riven by guilt over her death that he can’t bring himself to share, especially with Tohru. 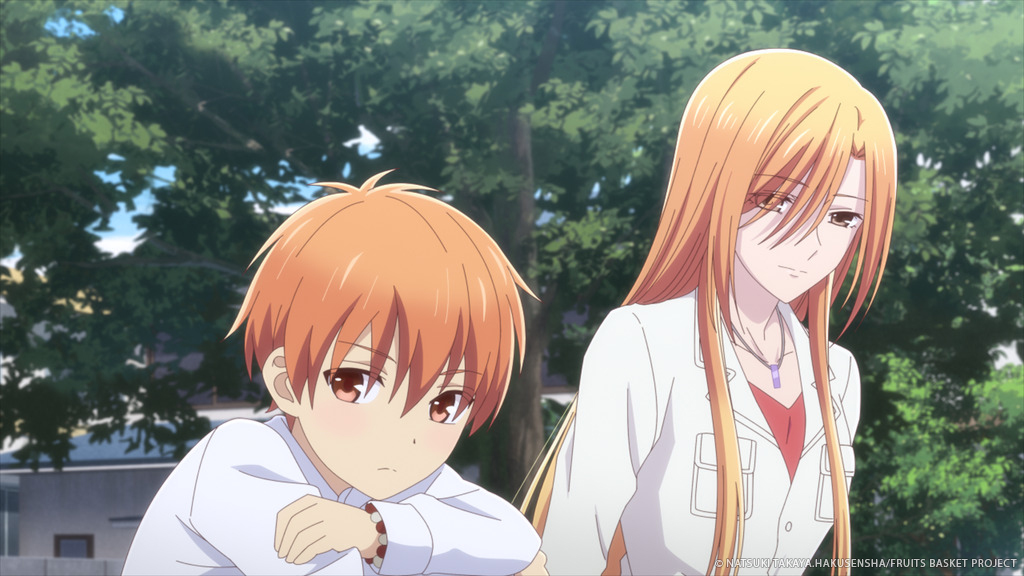 But who were Tohru’s parents? How did they meet? Why is she on her own when Fruits Basket begins, with nowhere to live? After Fruits Basket – prelude – spends a half hour or so introducing us to Tohru and Kyo and reminding us that they are – in spite of the Soma Zodiac curse – very attached to each other, the film spools back to show us the delinquent adolescence of Kyoko, Tohru’s mother. From here on, the film uses material that isn’t explored in the manga. The main protagonists are fifteen-year-old rebellious Kyoko who is angry with everyone and everything, but most especially her cold, rejecting parents – and the young trainee teacher at her junior high, Katsuya Honda, who takes the time to listen to her and persuades her to take a fresh look at her life. 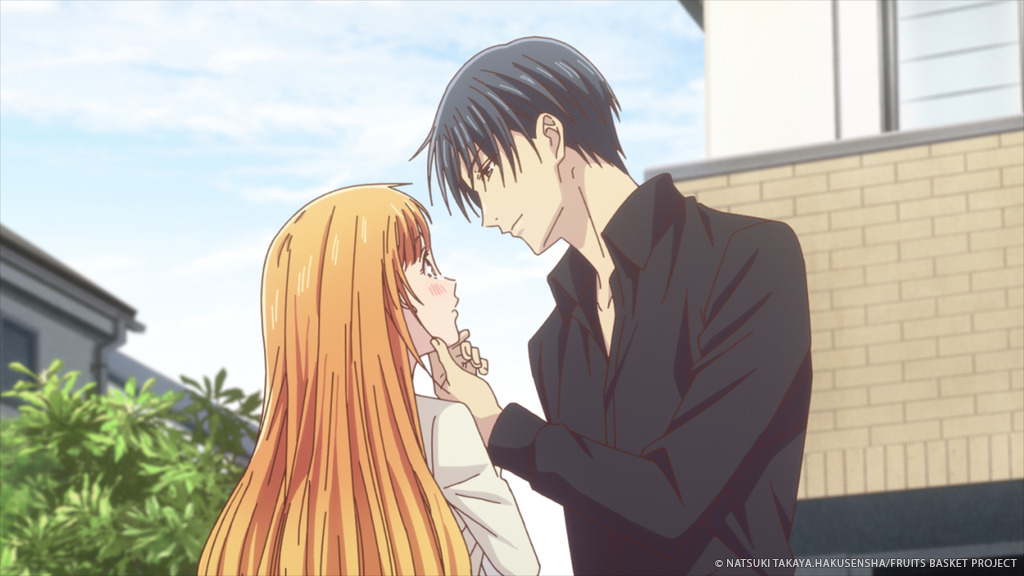 A shojo film based on one of the most popular shojo manga of the twenty-first century is a rare thing to find being screened in UK cinemas – but Fruits Basket – prelude – a prequel to Natsuki Takaya’s best-seller is about to pull that off, thanks to Crunchyroll. And it should be celebrated for that fact alone, as shojo is still a very neglected area when it comes to films, let alone TV series, with shonen action-based films dominating the field.

The recent TV anime series of Fruits Basket came to an end on streaming last year after three very popular seasons in a new version that faithfully adapted the whole 23 volumes of the manga. And so it must have seemed like a good idea to use the same voice cast to bring their characters to life once more on the big screen. The Fruits Basket US dub is one of the best around as they kept the same voice actors that took part in the original 2003 version and they, along, with an excellent dub script from Bonny Clinkenbeard, really know their characters well and invest them with a great deal of emotion and understanding, thanks also to ADR direction from Caitlin Glass. 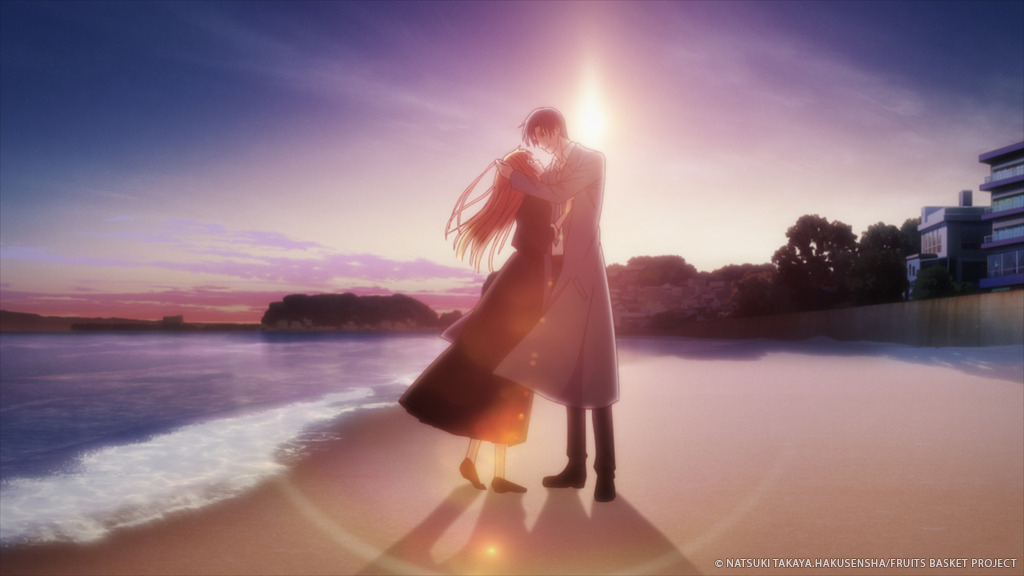 Yet sometimes it’s best to leave things the way the author/mangaka wrote them and not to go over ground that’s already familiar to the reader/viewer because it’s already served its purpose within the overall narrative. And this is the case here; the viewer who’s watched all three TV series knows exactly what’s happened and has already gone on that journey with the characters (as has the manga reader). Even if we haven’t seen the story of Tohru’s parents spelled out, we know what happened to them, so there are not going to be any surprise plot developments or revelations to keep us watching. Just a slow, depressing countdown to first one death and then another. To be honest, this isn’t a film that’s recommendable to viewers unfamiliar with the original series – the half hour’s lookback at the main characters at the beginning is just as likely to confuse as much as it tries to explain who Tohru and Kyo are and why they’re together.

There are troubling aspects to this story too which don’t work so well in 2022 (the original was first published in 1998, and the portrayal of female characters has changed since then). We’re (rightly) uncomfortable with teenaged students becoming the romantic partners of older teachers, even when that teacher is portrayed as being sympathetic and offering a way out of an abusive family background.

However, TV series viewers will feel at home here as the music is provided again by Masaru Yokoyama who composed the attractive score for all three seasons of Fruits Basket and many of the themes are familiar. The character designs are again by Masaru Shindō, screenplay by Taku Kishimoto, the art direction by Tamako Kamiyama and overall direction by Yoshihide Ibata, the creative team behind the recent TV series. 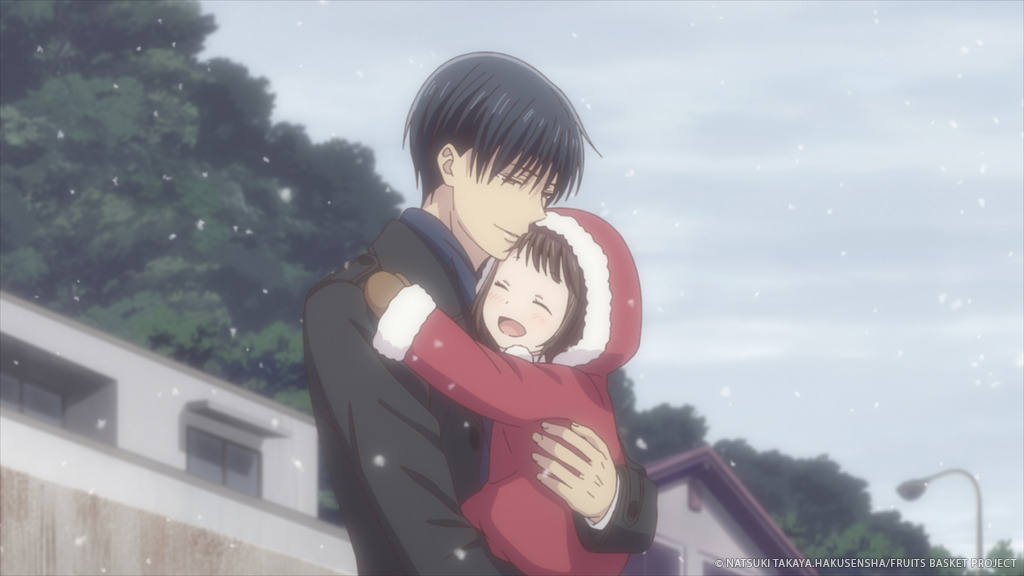 The US dub is the only audio version offered in this cinema release and praise must go to newcomer to the team, J. Michael Tatum as Katsuya Honda, Tohru’s father – and also Linda Mackay who returns to the role of Kyoko, whom we see grow from rebellious teenager to wife and mother. I really would have liked to have heard the Japanese cast, though, having grown to appreciate their performances throughout all three TV series.

There is a brief epilogue, showing us Kyo and Tohru as they go about their new daily life together, far from the Soma household. It’s oddly muted, given the assault on the emotions in the Kyoko/Katsuya section, and doesn’t quite succeed in delivering the ‘happy ending’ feeling I think it was going for. 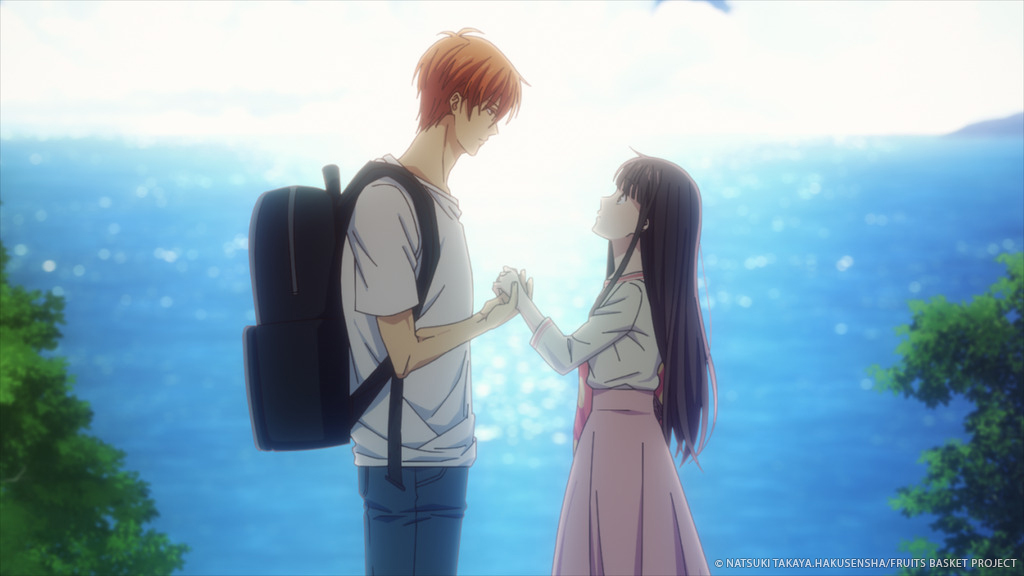 The credits roll to a montage of stills from the TV anime accompanied by the Trio Ōhashi performing “Nije to Kite”. And the stills serve to remind the viewer – this one, at any rate – how much better the TV series is than this rather depressing prequel. So, if the film brings more viewers to the three TV series (which are very well worth watching!) then that can only be a good outcome. 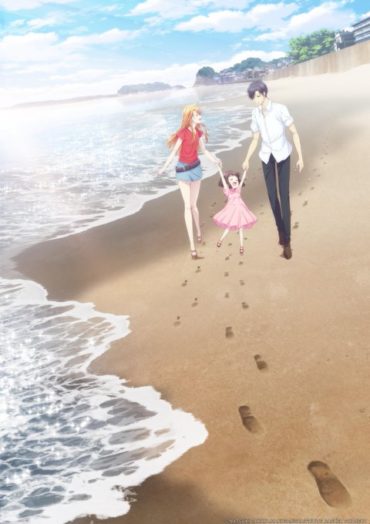