Tohru Honda has moved in with three of the Soma family: novelist Shigure and his younger cousins, her high school classmates Yuki and Kyo, sworn enemies since early childhood. Thirteen of the Soma clan live under a secret ancient curse: whenever they’re hugged by a member of the opposite sex, they change into one of the animals of the Chinese Zodiac, as Tohru has discovered by accident! Normally the fate of anyone who learns the secret is to have their memories erased – but for the time being, Tohru has been allowed to stay, her memory intact. Having a place to live while she completes her schooling is a boon for Tohru who lost her mother and home a year earlier – and Tohru’s nurturing presence is bringing change to the unhappy, dysfunctional Soma family, even if not all the Zodiac members are prepared to accept her straight away. 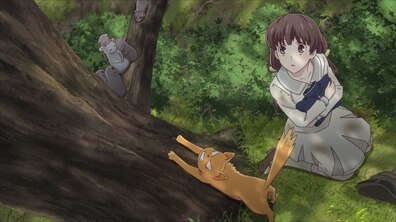 Even if Tohru’s presence is having a beneficial effect on the Soma family members that she’s met so far, the constantly simmering rivalry between Yuki (the Rat) and Kyo (the Cat) is much as before, even though the boys will now cooperate to protect Tohru, when needed. However when Kazuma Soma (Kyo’s foster father and martial arts Master/Shisho) turns up at Shigure’s house, Tohru has no idea how harshly  she’s about to be tested. 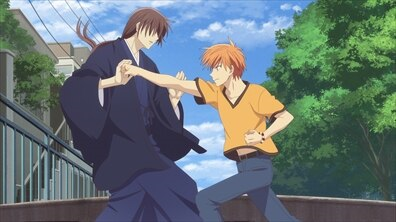 Part 2 of Fruits Basket Season 1 is where Tohru begins to understand just how much of a curse the Somas’ Zodiac inheritance is – and the series culminates in a terrifying reveal: one of a supernatural nature, in which she is exposed to real physical danger. But before this climactic event, there have been other, less dramatic but important reveals. Some episodes have delved into Tohru’s shared history with her two devoted school BFFs (goth Saki Hanajima with her ESP and one-time delinquent Arisa Uotani). Other episodes have introduced her to more of the Soma Zodiac animals, setting up some testing confrontations (they don’t all instantly love her, unlike Momiji, the Rabbit). By the twenty-fifth episode, this new adaptation has allowed itself the luxury of spending considerable time in the past. This has worked well in some episodes but in others, it’s been much less successful, highlighting certain aspects of the original manga that have dated, or just dragging its heels with certain encounters that don’t really contribute anything much to the development of the plot or characters. 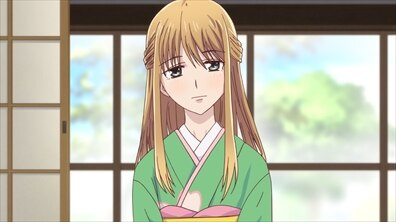 On the plus side, this 2019 version is especially good at revealing how Tohru’s gentle presence slowly brings about change (for the better) in the troubled hearts and minds of the cursed Soma children. The central triangular relationship highlights the way Yuki (treated as the perfect prince by the girls who idolize him at high school) is able to act ‘normal’ around Tohru, a great relief to him after the traumas of his early childhood [at the hands of the clan leader]. Yuki is able to reach a significant decision about himself which will change his outlook on life, going forward. Sensitive performances here from Eric Vale (Sanji in One Piece) and Nobunaga Shimazaki (Haru in Free!) make Yuki a rounded and sympathetic character, whose quiet temperament and handsome face hide a fog of self-doubt and uncertainty. And as the angry Cat, Kyo, whose fur always seems to be ruffled – except when he’s around Tohru – both Yuuma Uchida (Ash Lynx in Banana Fish) and Jerry Jewell (Victor in Yuri on Ice!!!) rise well to the considerable challenges that the dramatic final episodes of the season bring. 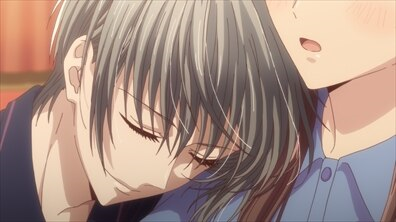 But before the nail-biting drama of the finale, there are some uneven and even ill-judged episodes. I really loved Fruits Basket back in the day and read it volume by volume as it was released by TokyoPop but certain elements have not aged so well, even if the central Zodiac premise is still as engaging as before. The ‘comedic’ elements – and comedy is not one of mangaka Natsuki Takaya’s strengths – don’t shine, especially Episode 19. Having the hysterics, shrieking and over-reacting are depicted as ‘amusing’ – and a little of this goes a very long way. (How many manga since Fruits Basket have used the put-upon novelist’s female editor desperately pursuing their errant authors who are behind on tight deadlines?) Devoting two episodes apiece to the backstories of Tohru’s friends, Arisa and Saki, also unbalances the flow. It’s interesting to learn of their difficult pasts but it distracts from the journey of the main characters, setting up a background conflict as to ‘Who Hurts the Most?’. If everyone has a tragic backstory (and everyone does!) then we’re left uncertain as to whom to root for. 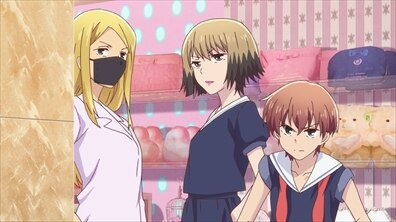 The series looks and sounds good, with the attractive character designs by Masaru Shindou, updating the somewhat dated originals (Natsuki Takaya has been involved at every stage of the production, it seems, and her own graphic style changed dramatically during the years she was drawing this series).

“Chime” by Ai Ohtsuka is the upbeat, lively new OP and “One Step Closer” by INTERSECTION is the gentle and sweet-natured new ED (it sounds as if the male Japanese voice cast are singing a line in turn as their Zodiac animals appear on-screen).

Extras on this attractive Manga Entertainment release comprise: Episode 18 US cast and crew commentary, Fruits Basket ‘Inside the Episode’ for Episodes 16,19, 22 and 25 and textless opening and ending songs. There are three more of the cute Zodiac animals and some art cards (shown below) as well for the Limited Edition. As with Season 1 Part 1, the sound, picture and navigation work well on the Blu-ray and the subtitles are clear and legible, even though they’re white with black edging. 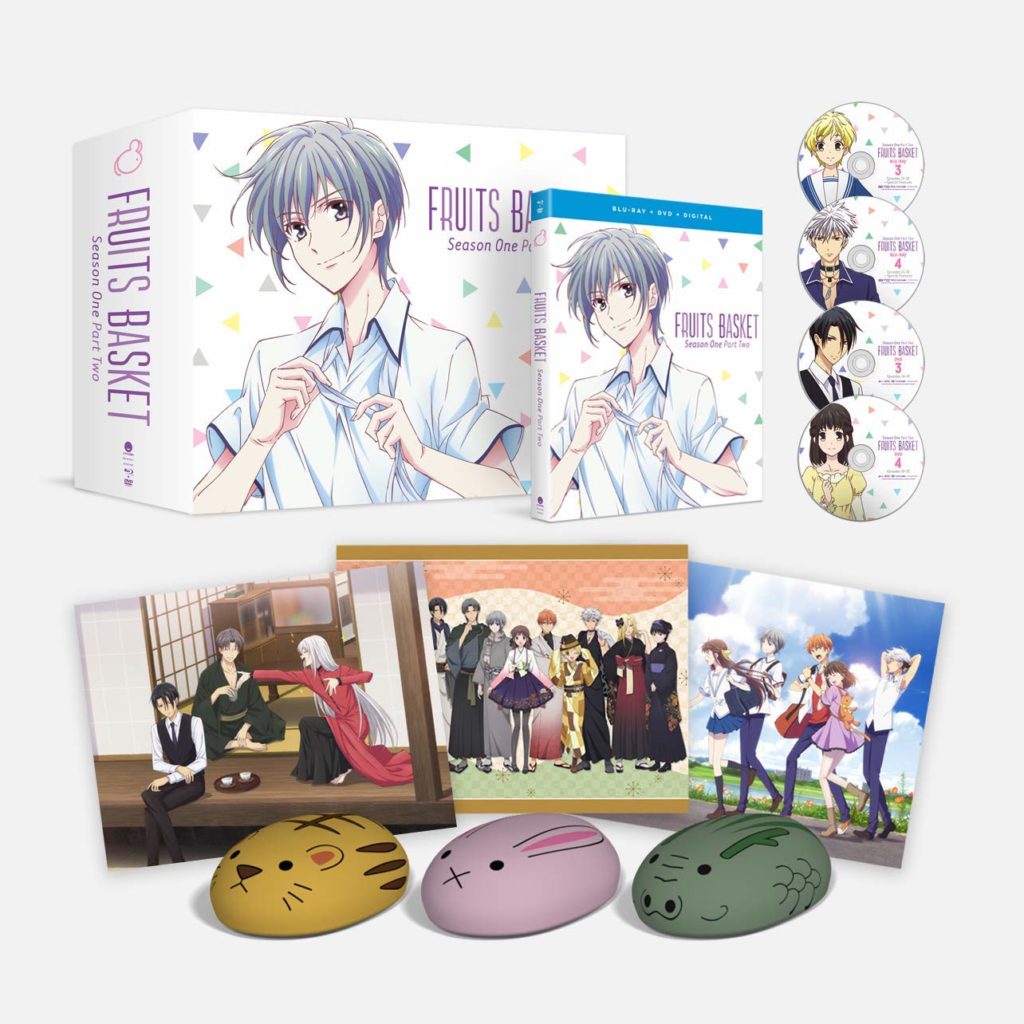 As we await (eagerly) the second season of Fruits Basket later in 2020, the generous number of episodes dedicated to this well-loved shojo manga is proving both a boon and something of a curse in the lavish new adaptation. Even though it’s interesting to have all the background on Tohru’s friends, the series lingers too long in the past when it needs to pick up the pace, losing a certain sense of dramatic urgency in the middle of this set (we call it a ‘sagging middle’ in the book trade!). Nevertheless, it’s still an involving watch and the final episodes leave the viewer eager to find out what happens next! 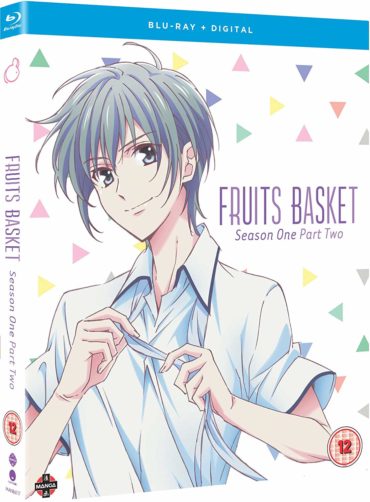 Yona of the Dawn Part 2 Review

Some spoilers ensue… Crimson-haired Princess Yona, the only child of murdered King Il of the kingdom of Kouka, is on the run from the forces of her cousin Su-Won, who has killed her father and seized the throne. She is the reincarnation of her ancestor, the heroic Crimson Dragon King, and is searching for his … Continued