‘Living dolls must be useful to the Shadow family.’

Shadows House is an imposing mansion which is home to the reclusive Shadow family, led by August Grandfather. The members of the family, young and old, are like 3D silhouettes and exude clouds of soot when their negative emotions are stirred. Each family member is partnered with a ‘living doll’ that acts as their servant, companion, and their ‘face’. Young Emilico, blonde-haired and blue-eyed, has been assigned as Miss Kate’s living doll and she does her best to please her mistress, even though she’s very new to the ways of Shadows House and makes many mistakes. She doesn’t understand the need to eat to keep up her strength (bread is delivered daily to her room) and doesn’t know how to read, so Miss Kate teaches her. Her main task is to clean the soot from Miss Kate’s rooms which her young mistress exudes – and as she tends to exude more soot the more vexed she becomes at Emilico’s clumsiness, it’s a never-ending task.

At first Emilico spends all her time with her mistress but eventually she’s made to join in the general cleaning of the mansion and gets assigned to a team with three other living dolls. At first she is overwhelmed when she sees the hordes of other living dolls and the vastness of the rooms they have to clean – but her cheerful, willing nature soon re-asserts itself and she sets to with gusto. But later, while cleaning the windows, she falls from Kate’s room into the formal gardens far below. Alarmed, Kate hurries down to look for her and check that she’s all right – and the two encounter another young female Shadow, Sarah, and her ‘face’ Mia (who is one of Emilico’s team of four). Sarah is very scornful and disapproving of Kate and her useless ‘face’ who dares to speak up for herself instead of obediently mirroring her mistress’s expressions and demeanour. Sarah’s disdainful words on parting are filled with foreboding. “Perhaps Sarah wasted her time introducing herself. Failures like you two… are bound to be scrapped by August Grandfather.”

Like many potential readers for this intriguing series, I’ve come to the manga having already watched the compelling anime TV series (and now currently watching Season 2). So the material is very familiar to me – and yet I was eager to see how the two mangaka who call themselves so-ma-to/Somato had introduced and developed their characters and their predicament. There’s a distinct gothic chill about this tale of the aristocratic Shadow family who live in Shadows House and the living dolls who serve them and act as their ‘faces’. Sunny-natured Emilico makes the perfect viewpoint character; painfully eager to please Miss Kate, her young Shadow mistress, yet having to learn everything about her role as a living doll – and frequently getting it wrong. Watching the two girls getting to know each other and growing more confident in their relationship as they work through misunderstandings is rewarding, especially as all the hints about life in Shadows House imply that they’re really going to need to rely on each other. There are so many questions that arise in the reader’s mind as they, like Emilico, encounter mysteries that are not explained and lurk in the darkest corridors and recesses of the vast mansion. Who (or what) for example, are the veiled Faceless Dolls who deliver clean laundry and meals?

The twelfth and final chapter ‘In Filth’ in this volume is the only one written from a point of view other than Emilico’s and the style is very different. We are offered a glimpse inside Kate’s mind – and the one word that echoes through the whole chapter, vividly illustrated, is ‘filthy’. It’s hard not to feel sympathy for the young Shadow girl as every moment of her waking life is dominated by the all-pervasive soot she gives off.

Yen Press have delivered an attractive first volume which contains several colour illustrations. The translation is by Taylor Engel and lettering is by Lys Blakeslee and both serve the manga well.

Whether you’ve watched the TV anime series or not, Shadows House makes for a fascinating read. It reminds me a little of the tales of Green Knowe by Lucy M. Boston, set in an old house of great character in which time sometimes has no meaning. Shadows House is imaginatively conceived and manages to exude a sinister and compelling atmosphere that draws the reader in while at the same time, charming us with the growing friendship between Emilico and her mistress Miss Kate.

Somato (or So-ma-to) is a duo of artists: Nori (story/design) and Hisshi (drawing) [Baka-Updates]. In Japan, Shadows House is currently up to eleven volumes; Volume 2 of the English edition is due out in October 2022. 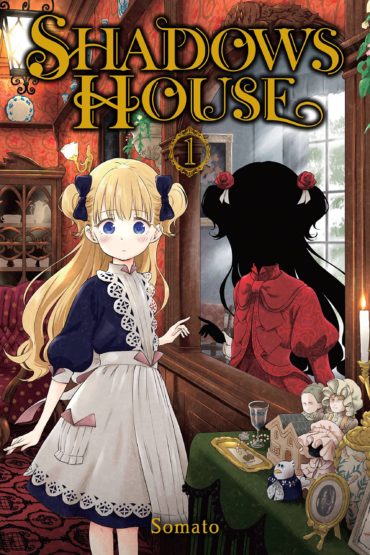 Emilico is doing her very best to serve her young mistress – but when a terrifying phantom made of soot creatures appears in Shadows House, all the living dolls must work together to try to destroy it!