Emilico is the fearless, resourceful living doll, in training to be the ‘face’ of her shadow mistress, Kate. But she has much to learn about the ways of Shadows House, the vast mansion the noble Shadow family inhabit, and she has now joined one of the many teams of living dolls that labour to keep the place clean of soot. If they don’t work their hardest, horrible coagles, malevolent soot creatures, will appear and wreak havoc. And it’s not long before not one but a ‘phantom’ – a whole mass of coagles – appears. Urged by Barbie, the grim-faced, relentless Star Bearer doll who’s in charge of the teams, to do their best, Emilico shows how indomitable and practical she is when faced with danger. But even though they manage to win through, it’s not before a spider-legged coagle attacks Rosemary, the leader of Emilico’s team. She is rescued by Emilico’s quick thinking and resourcefulness – but not before the soot has taken its toll.

Suffering from soot sickness, Rosemary is taken away to be ‘cured’ and Barbie, furious, blames the coagle outbreak on one of the teams ‘slacking off’. The living dolls must patrol at night – and she chooses three: Emilico, Shaun and a very quiet, shy doll who is too nervous to speak. Shaun, it turns out, is short-sighted and needs to wear glasses – but can’t, because his noble shade, John, doesn’t need to wear them. On patrol, the three have an alarming encounter with a sinister figure who seems to be one of the noble shades but who is completely hidden by a hooded gown. “I’m not your enemy,” the hooded figure tells them, “although I’m not your ally either.”

Meanwhile, Miss Kate has discovered that she has a special ability; she can move soot around – a gift which delights Emilico but which Kate decides must be kept a secret for the time being. Soot comes from negative emotions, Emilico silently observes. That’s why it gets malicious and starts moving. At that point it’s a coagle… Those move on their own? But people like Miss Kate can also move it on purpose? Was somebody moving the phantom too?

And now Miss Kate and four other younger noble shades have been told to prepare themselves for their formal debut at which they and their faces will be assessed by someone from the upper house. What will they be required to do to prove they’re ready to progress to the next stage? Will Kate and Emilico pass the tests?

If, like me, you’ve watched both seasons of the excellent anime TV series, you’ll be surprised to find certain plot elements appearing earlier here in the original manga. This won’t affect your enjoyment of this dark and sinister fairytale in which Emilico and some of the other living dolls are beginning to realize the extent to which they are prisoners of the Shadow household. Here we meet the other Shadows children and their faces about to make their debuts alongside Kate: the silent, frightened one whom Emilico does her best to befriend and eventually gets to learn her name and her mistress Shirley; the resourceful Shaun and his master John; Louise and Lou and the sneering, superior Ricky, with his master Patrick.

The art by two mangaka team Somato is sometimes delicately etched, at other times, black as soot and suitably terrifying, especially during the attack of the coagles. The Yen Press edition is beautifully presented, with four glossy colour pages at the front and four more at the end; helpful character portraits are also included. Taylor Engel’s translation continues to capture the many different characters’ voices well in the dialogue, from the insulting nicknames invented by Barbie such as ‘Daisybrain’ for Emilico to Rosemary’s cooing instructions to her team.

The underlying sense of menace is slowly but steadily increasing in this volume. At this stage, it’s not easy to discern whether Emilico’s more in danger of being demeaned and bullied by other ‘superior’ partnerships like Lou and her mistress Louise. However, even as the odds seemed heavily stacked against Emilico and Kate passing their debut, we’ve seen that they understand each other well and that understanding is going to give them an advantage over the pairs that don’t work so well together. But the genteel atmosphere and tinkling piano music of the debut masks awful rumours of the dire fate which awaits any pair that fails.

Shadows House is a compelling read for those who love a 19th c. gothic mystery with a chilling touch of the supernatural: it will appeal to fans of Black Butler, Pandora Hearts and The Duke of Death and his Maid. I can’t wait for Volume 3, due out in March 2023! 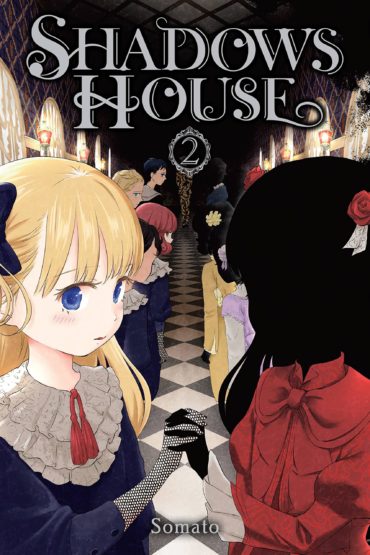 Enter the strange and sooty world of Shadows House in which the enigmatic aristocrats are served by living dolls who must act as their ‘faces’ in Volume 1 of the atmospheric manga by Somato.