This short but charming comedy manga, partly based on real-life events, contains elements that any cat owner will immediately recognise, although the artwork may be a challenge for some readers.

Nights with a Cat has a simple premise. Fuuta has taken in his student sister P-chan as a roommate, who brings along with her a pet cat. At first Fuuta doesn’t know how to react to the feline but after three days he becomes obsessed with him, filling his phone with cat photos.

Eventually the cat is named Kyuruga, meaning “QR Code”, because when P-chan tries to take a photo of him, his head fur is displayed in such a way that her smartphone thinks the fur is a QR code.

The manga consists of several short chapters (one is just a single page), of Fuuta learning more about how to interact with Kyuruga and the trouble the cat sometimes causes.

In terms of story, there is not much to Nights with a Cat, given that it is just a collection of short comic strips. It does make for a nice manga to dip in and out of however, and there are several laughs along the way, such as when Fuuta sees Kyuruga curled up in several shapes, making him look like a roast turkey or a slug. The book’s afterword says that the QR Code incident is one that happened to author Kyuryu Z and his own cat.

The most notable aspect of the manga however is the artwork, which I suspect is going to be a stumbling block for readers expecting something more traditional in the manga style. The character designs are the most noticeable thing, with Fuuta not being depicted with either a mouth or nose, his face consisting of just his hair and two large eyes with massive pupils. All three characters in the story have these eyes with huge pupils, which in my mind feel more reminiscent of the Moomins than anything you see in manga. Personally speaking, I have no major objection to this style, and the minimalist face of Fuuta can at times provide extra gags, with the exact details of his mood having to be written in little extra notes.

Nothing seems to be wrong with Stephen Paul’s translation, while Lys Blakeslee adopts an interesting lettering style, ditching the normal comic sans style for a font that feels more organic and like someone’s handwriting.

The series has been adapted into an anime which began airing in Japan earlier this month. It is not currently available on any English-language streaming websites, but you can watch the original Japanese episodes on the show’s official YouTube channel. The second volume (of three so far) is due out in September from Yen Press. 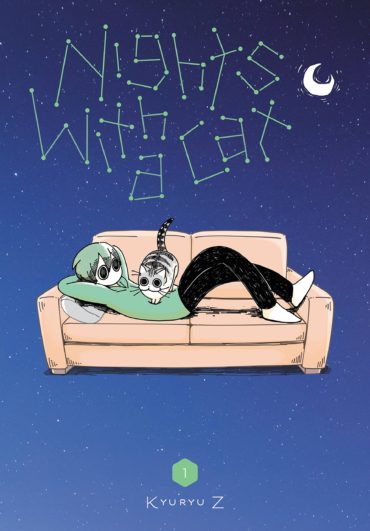 Title
Nights with a Cat Volume 1

Ghosts and a portion of hotpot are offered in the second volume of this feline harem series.