While most isekai series tend to focus on the hero or the villain, The Eminence in Shadow instead follows someone lurking in the background, or at least trying their hardest to do so.

The central figure is a boy who, when watching TV as he was growing up, had no desire to be the central figure, but to be a “shadowbroker”, the mastermind who is controlling the story without most people noticing. His desire was so strong that at school while he tried to be as average and dull as possible in public, in private he was doing all kinds of physical training resulting in him becoming the most muscle-bound background character ever. He then tried to learn magic, which among other things involved crucifying himself and trying to be one with nature by banging his head on trees while naked. He finally did see the light and ran towards it – however, the lights were from a truck, and we all know what happens when you get a visit from Truck-kun.

The boy is reincarnated and is now Cid Kagenou, the 10-year-old younger son from a family of dark knights. On the surface, his powers are again average, but in private the strength and magic that he built up from when he was still in our world are manifest and great. Once again, Cid dreams of becoming a shadowbroker, making money in private by beating up bandits. In one of his raids, he rescues an elf whom he names Alpha. Cid invents on the spot the idea that he is part of a group called “Shadow Garden”, devoted to secretly preventing the resurrection of a demon called Diablos by an evil cult. Alpha joins Cid and in fact becomes the first member of Shadow Garden. Cid however is unaware that in fact there really is an evil cult trying to resurrect Diablos.

This opening volume of the manga takes place over several years, with Cid quietly building up Shadow Garden and recruiting more members, all of whom he names after Greek letters, to what he thinks is his made-up cause. When Cid turns 15, he joins an academy for dark knights and due to a bet gone wrong, finds himself dating the school idol who treats him like dirt, which not only threatens his status as a shadowy unknown, but also unwittingly results in more mysterious connections with the evil cult being revealed.

Those who read Demelza’s review of the original light novel version of The Eminence in Shadow will know that Demelza was critical of author Daisuke Aizawa’s writing, but enjoyed Touzai’s art – Touzai being credited as the character designer for the manga. I am inclined to agree with Demelza, but as this is the manga we get more art to enjoy over the substandard writing.

When it comes to the writing, too much how Cid comes to be so strong is down to a combination of his very early training in the previous world and so much blind luck that if this story were based on a video game like isekai world you would assume Cid had maxed out his luck stat. For example, when Cid’s older sister Claire is kidnapped at the beginning of the second chapter, he announces he knows where she is by throwing a knife into a certain spot on a map. He just throws the knife at random, but by sheer luck it happens to be the right spot. How convenient!

Fortunately, the manga provides some enjoyable visual moments. Combining Touzai’s character designs with the manga art of Anri Sakano, the best moments are the visual slapstick gags, such as in the early training sequences when the old-world Cid ends up with a bloody head by banging his head against trees, or Cid joyfully running towards Truck-kun and thus to his death. Sakano also provides plenty of shadowy gloom when Cid joins the fight scenes, even though the fights are incredibly one-sided, thanks to his powers. The one nice bit of writing in these fight scenes are references to JoJo’s Bizarre Adventure, with Cid shouting: “Ora Ora Ora Ora!!!” while beating up bandits.

The first light novel was translated by Kristi Fernandez, but then Nathaniel Hiroshi Thrasher took over. Regarding the manga, it is Thrasher working on it from the start, and again there appear to be no problems with the translation, and nothing appears to be obviously wrong with Phil Christie’s lettering either, although it doesn’t stand out as remarkable either. In fact, it is working rather like a shadowy eminence in the background, ticking things over.

It seems the manga is thus better than the light novel and out of the two, it seems that this version of The Eminence in Shadow is the one to go for. Having said that however, the series is to be adapted into an anime as well by Nexus. If the visuals are the key to what makes this series good, perhaps the best adaptation is yet to come. 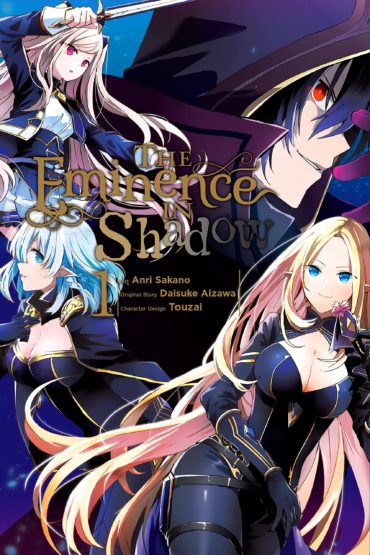 Title
The Eminence in Shadow, Volume 1

Protagonist Cid Kagenoh dreams of having his own secret organisation that fights evil from the shadows. Sadly, that’s not possible in Japan – but when our hero is reincarnated in a fantasy world, he finds himself in the perfect position to chase his dreams! So begins The Eminence in Shadow…