Seiichirou Kondou is good – rather too good – at his job in accounts. Work piles up but although he’s accurate and conscientious, he’s taken for granted by his bosses and now he’s almost thirty, he’s beginning to wonder wearily if his life will ever change. But when on his way home he hears cries for help, he comes upon a young woman being sucked into a gaping hole. Without a thought for his own safety, he catches hold of her – but instead of pulling her out, he’s sucked down into the maelstrom of darkness with her.

Emerging dazed and confused to see a crowd of strangely attired people welcoming the young woman as ‘Your holiness’, Kondou realizes that he’s been brought alongside a Chosen One into a parallel world, which he soon learns is called the Romany Kingdom. He’s not meant to be there. He was just in the wrong place at the wrong time.

Ever practical, Kondou determines to make the best of a dire situation and asks if he could be put to work. Helmut Somaria, the man in charge of the royal accounting department, welcomes him and soon diligent Kondou’s hard at work.

Summoned to court, he meets again with the Holy Maiden, who introduces herself as Shiraishi Yua. She’s now under the protection of the firstborn prince, Yurius, and tells Kondou that she’s been summoned to dispel the Miasma, a blight that threatens the kingdom once every century or so, emanating from the Demon Forest and spreading plague. Kondou is worried about her; even though she’s passionately invested in her role in saving the people, he begs her to be careful – but she misinterprets his concern and flounces out.

And then the bad news arrives: a Miasma outbreak has officially been confirmed and the kingdom’s finances are not in a good way to cope with the fall-out. Now that Kondou is in-post, he’s begun to discover all manner of errors in the financial records over the last twenty years. He throws himself into the work to try and find out what’s gone wrong and how to ameliorate the situation.

So far, so predictable in isekai terms – but it’s when Kondou collapses in the street due to an overdose of the nutritional tonic (he’s been this swigging as if it’s an energy drink to keep himself going) that the story takes a very different turn. He’s found by the stern-faced knight captain, Sir Aresh Indolark, who’s been ordered to keep an eye on him. Aresh is one of the elite Third Royal Order who wield magic (and who’s been scowling suspiciously at Kondou since the moment he tumbled into this world unannounced and unsummoned). Seeing how unwell Kondou is, Aresh uses his magic to revive him – only to discover that his magic sets off a life-threatening fever in Kondou who, of course, is not of the same world and whose physiognomy is not adapted to such treatments. Is it too late for Kondou – or can the knight find a way to save his life?

Based on a series of light novels by Yatsuki Wakatsu, The Other World’s Books Depend on the Bean Counter could have proved to be just another variation on the isekai theme, this time involving accountancy and abacuses! However, the light novelist has another theme bubbling to the surface: the faint stirrings of feelings between Kondou and the stern-faced knight, Aresh Indolark. This is the first BL isekai I’ve come across to be published in English translation and the BL content is so minimal in these first chapters as to be hardly there. Although to discuss the last chapter in this volume would be to give away too much of the plot at this stage – but suffice it to say that as this volume has a ‘Teen’ rating, it’s a question of to what extent you choose to imagine what’s happening between the panels and how you interpret what’s happening from the mangaka’s attractive drawings. Those who know will know… and those who don’t notice will be none the wiser, I guess!

This is the first work I’ve seen by Kazuki Irodori, but she has produced a really eye-catching manga adaptation of the light novels, based on the character designs by BL/josei mangaka Kikka Ohashi. Her art is attractive and accomplished, drawing the reader in and making them care about the characters; no mean feat in the overcrowded world of isekai. The subtle and pleasing colour scheme (blues and grey) of the cover art is echoed in the colour image at the front of the book.

Kudos too to author and mangaka for neatly dealing with the language problem early on. Right off the bat, I thought it was strange how I could converse with everyone, Kondou observes, but it’s as if everything I say and hear is being auto-translated. Rather sweetly, he reckons that this essential ability might be god’s gift to him as an apology for dragging him into a parallel world.

Emma Schumacker’s translation for Yen Press makes for an enjoyable read and the lettering by DK is neatly and clearly done. Unusually, Yen Press are releasing the second volume (of three so far) at the end of August, so we don’t have long to wait to find out what happens next!

The Other World’s Books Depend on the Bean Counter is a refreshing breath of fresh air in the ubiquitous isekai genre, brought to vivid life by Kazuki Irodori’s attractive and accomplished artwork. Recommended! 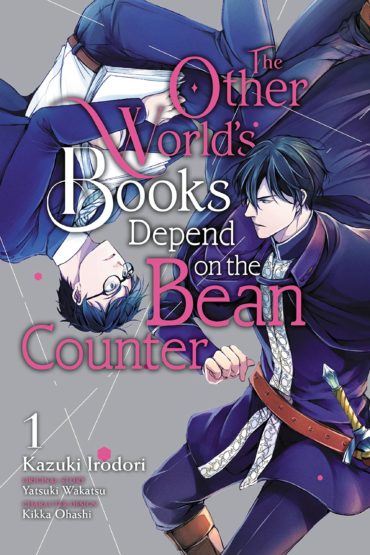 Being dragged by mistake into a parallel world was bad enough but now salaryman Seiichiro Kondo discovers that his body has not adjusted to the new atmosphere and he might die. Luckily, young knight captain Aresh is on hand to look after him – if they can agree on anything, that is!