“I’m pretty sure parallel world people have different bodies than we do.” (Aresh Indolark)

Transported to another world by mistake, salaryman Seiichiro Kondo is doing his best to make himself useful by working hard in the palace accounts department. But his addiction to work (and nutritional tonics) leads to his sudden collapse in the street. Rescued and healed by the stern-faced Knight Captain Aresh Indolark, Seiichiro can’t wait to get back to his work. The fact that Aresh has been obliged to heal him by having sex with him (consensual, of course) is something that he’s accepted but is perhaps also in denial about; this is another world and they do things differently here. But Aresh is horrified to find him back at his desk (“You nearly died!”) and marches him off to meet Ciro Quellbas, the Director of Medical Affairs, who diagnoses his weakened condition to be caused by his lack of resistance to magicules, tiny energy particles in the air. As Sei was dragged into the world at the same time as the Holy Maiden was summoned, she was protected – but he was not and is suffering as a consequence. Aresh, who for many reasons feels responsible for Sei (could he have fallen for him?) undertakes to look after him. This means – to Sei’s horror – insisting he eats properly and takes time away from his desk to rest. And no overtime! Sei is not prepared to be mollycoddled (although a dinner date at Aresh’s favourite restaurant appeals because the dishes served there are lighter and more like the food he’s used to in Japan) and stubbornly tries to resist Aresh’s new regime. How does he see me? As his pet? the puzzled Sei wonders until another clash of wills ensues between the two.

And the Holy Maiden, Lady Yua? She’s receiving instruction in the magical arts from Aresh and one day follows him into the dining hall where he’s supervising Sei’s diet. A rather awkward meal ensues at which she thoughtlessly calls Sei a ‘workstock’ yet again, and tries to serve him food he shouldn’t eat (to Aresh’s horror). Does she have a little crush on the handsome captain? Does she maybe see Sei as a rival?

The air almost crackles when work-addicted Sei and his self-appointed physician Aresh start arguing. Sei has been overworking for so long back on earth that it’s become the only way of life he knows; he’s almost like an addict deprived of his fix, visibly twitching when prevented by Aresh from getting back to his desk. This leads to frequent heated exchanges between the two as they begin to negotiate ways to understand the other’s manner of thinking. At first Seiichiro reckons Aresh thinks the way he does because he’s a privileged noble and can’t see matters from an ordinary individual’s point of view – but then he begins to realize that the young captain is so much more than an entitled member of the ruling classes; he’s caring toward others, in spite of his brusque manner. Yet there’s no way he could be in love with him! The charming bonus story at the end, The Bean Counter’s Fate Depends on his Subordinates, shows us yet another side to Aresh and the way that he thinks about Sei.

This second volume of the manga adapted from Yatsuki Wakatsu’s BL light novels brings the talents of new mangaka Kazuki Irodori to the fore, confirming the promise of the first (and it’s so nice to have the two made available within a four-week span by Yen Press)! Not only is Irodori a talented pictorial storyteller (the story flows along very smoothly, something that doesn’t always happen with adaptations from light novels) but under her pen the characters spring to vivid life on the page (no mean feat). I’m not a fan of the isekai-by-rote clichéd manga that seem to proliferate on the shelves, month after month, but this one really stands out because of the novelist’s well-planned set-up: Sei brings his problems with him into the parallel world and only begins to change his outlook on life when Aresh intervenes. It’s rare to be able to single out the conversations between characters for praise in what is, above all, a visual story-telling medium but, aided by Emma Schumacker’s translation for Yen Press, they are what really help to bring the story to life.

There’s only a third volume out in Japan in this ongoing series and thus far Yen Press haven’t yet given us a date for it so one can only hope we won’t have to wait too long as this volume ends abruptly on a dramatic cliffhanger! 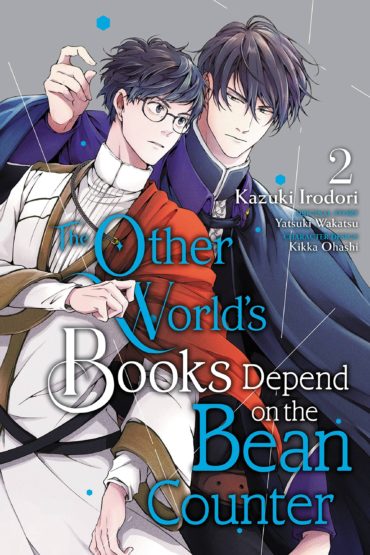 A present-day Japanese workaholic accountant is dragged – by mistake – into another world. So far, so standard isekai…except Seiichirou Kondou’s life ends up taking a very non-standard isekai route when he meets Knight Captain Aresh.