I can’t explain well enough how happy publishers make me every time a new Korean webtoon series in announced being released as a print edition in the West. Why Raeliana Ended Up at the Duke’s Mansion has been on my to-read list since before the English translation was published. And those who know  me know that I can’t keep quiet when I’m happy. I had to announce it to all of my family and friends that this series was being released (although they couldn’t care less).

Raeliana is the daughter of a noble family who obtained the nobility status as nouveau riche (their oil business made them a lot of money). She has a business engagement and a loving family. Things couldn’t be better… if only Raeliana was the real Raeliana and not Eunha, a modern-day Korean woman who was killed and then woke up in the body of Raeliana. Eunha now needs to keep up the pretence of being Raeliana in this new fantasy world and find a way to survive. Because Eunha is now a side character in a novel she read—a side character who gets killed at the beginning of the story and whose death acts as a catalyst for the heroine and the hero to meet.

Enter Noah Voltaire Wynknight, duke of the empire, younger brother of the emperor and the male lead. If Raeliana wants to survive, she’ll need his power while she figures out what to do next—and what better way than to show Noah she has something he wants? The two enter into a “business” contract and now they have do deal with the consequences. Will it be worthy? I don’t know yet, but I’m counting down the days until Volume 2 becomes available.

That perfectly summarises the relationship between Noah and Raeliana. The two can’t stop butting heads, with one always trying to outwit the other to get the upper hand. Noah is used to intrigues and the politics of court. He’s double-faced and as we learn, thanks to Nick (another character I adored) Noah has two smiles. The polite one that he shows to everybody (the meaning of this smile is quoted above) and his true wicked face that he shows to the woman daring to make a deal with him. On the other hand, Raeliana knows what’s going to happen next and who are the key players in the story, so she knows what to bargain for. I kept looking forward to seeing who would win each discussion, and for every single one of them, I couldn’t stop smiling.

The illustrations are gorgeous, and the readers would be able to follow the story even if the text weren’t present. The artist, Whale, is able to show every single emotion that the characters are going through also, thanks to turning the characters into chibis when an emotion or situation requires it.

The story showcases a strong and independent woman who won’t let anyone mess with her, nor kill her. Raeliana takes her fate in her own hands, and if it means disturbing the natural flow of the story, too bad. She’s going to survive.

Lastly, I loved how Raeliana defended the character of Adam. Although in another world, discrimination is still present, and this time it’s against Adam, the personal guard of Noah. He was a child soldier, and he comes from a tribe whose members are told to be savages, so the people of the empire distrust him just for his background. Raeliana nips any discussion about Adam’s heritage in the bud and tries to teach the people close to her to not judge just because of where one is from.

Why Raeliana Ended Up at The Duke’s Mansion Volume 1 written by Milcha and illustrated by Whale has been translated into English by David Odell and published by Yen Press.

Volume 2 is scheduled to be released in November 2022. 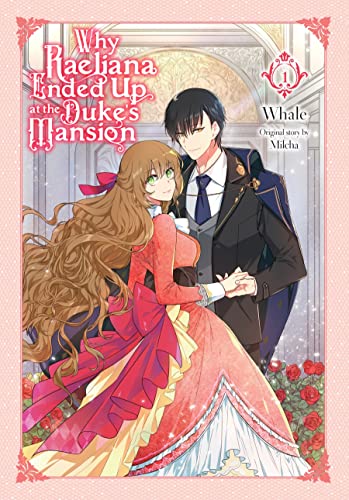 Title
Why Raeliana Ended Up at The Duke's Mansion Volume 1