The first omnibus collection of Shuzo Oshimi’s Devil Ecstasy introduced us to Noboru, a young man who fell in love with a succubus and found himself in all kinds of trouble after discovering the secret behind the Devil Ecstasy brothel. With the series coming to a close in this release, just what horrors await our protagonist?

As we reunite with Noboru, we find that he and his love interest Melulu have moved in together, determined to make a relationship work despite the difficulties of being different species. They can’t sleep together in case Melulu accidentally kills Noboru, but he’s okay with that provided he can stay with the girl of his dreams.

Nevertheless, Melulu grows increasingly concerned that she can’t do anything physically for Noboru in their relationship. Seeing no other solution than to let Noboru find a human girl to spend his days with, Melulu decides to return to Devil Ecstasy, but little does she know that the succubi and humans are about to go into a battle that will decide their fate forever!

Unbeknownst to Noboru, the Japanese police force has put together a task force to investigate the succubi and Devil Ecstasy. With it being revealed that succubi have integrated themselves into society so well that they have reached anywhere and everywhere, it’s becoming clear that the whole of humanity may soon die out if they leave the succubi to their own devices.

The group capture some succubi (and human-succubus couple Kageo and Lalabelle) to experiment on, eventually leading them to create a weapon that can kill a succubus in a single shot. Armed and prepared to kill, the group enter Devil Ecstasy in the hopes of killing the leader and stopping the spread of succubi.

Naturally, because of Melulu heading back there, Noboru finds himself embroiled in this whole thing and he’s in for a surprise when he finds out who the leader of Devil Ecstasy really is! But even so, his desire to be with Melulu may yet prove to be the answer to everything.

When I reviewed Volume 1 of this series, I called it Oshimi at his most unhinged and I don’t regret that, nor do I retract it because the direction this manga continues in is absolutely nuts. We’re long past the point of asking if this series is good or not and well into the realm of not being able to put it down simply because it compels you to see it through to the end.

If you didn’t like the first instalment, then this one will do nothing to change your mind. In many ways, it’s a lot more violent, sexual and ridiculous in comparison to what came before. Yet somehow it does manage to tell a coherent story on the whole, which I have to give Oshimi credit for. No matter how nonsensical the story gets, it does at least come together in the end.

On the whole, I don’t think I could say Devil Ecstasy is good or bad, it’s an experience and one that other fans of the author will get a lot out of reading. The manga is unapologetic for how outlandish it is and as I said last time, it’s clearly the roots of where Oshimi has taken his various manga since.

Volume 2 of Devil Ecstasy comes to the West thanks to Kodansha’s Vertical imprint and is a 2-in-1 omnibus containing Volumes 3 & 4 of the Japanese release. The release is translated by Alexandria McCullough-Garcia and the translation reads well with no issues of note.

Overall, Devil Ecstasy Volume 2 manages to conclude the series in a satisfying manner even if the road to get there is just as ridiculous as the release that came before. If you weren’t a fan of the first release then this won’t be for you, but if you find yourself compelled to finish, then this is an enjoyable enough read for what it is. 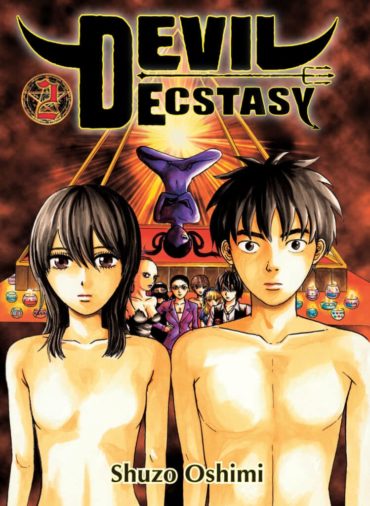