Earlier in the year, Kodansha brought Devil Ecstasy to the West, a work that was author Shuzo Oshimi’s first multi-volume series. Now we’re going even further back in time to Oshimi’s very first original work – Avant-Garde Yumeko. Does it impress? Let’s find out!

The story follows 15-year-old high school student Yumeko Mochizuki who, while flipping through a magazine, stumbles upon an article about a rock in the shape of male genitalia. Now she has a fascination with the male organ and no matter what she’s doing, all she can think about is seeing one for real. Surely if she sees one for herself then her thoughts won’t be quite so single-minded, right? Of course, that’s easier said than done when you’re an underage teenager in a time when the internet and smartphones aren’t widespread (this series was written in 2003, after all).

One day while pondering her problem, Yumeko comes across a used bookstore where she finds a book on nude poses. The pictures are helpful, but too small and low quality to satisfy Yumeko’s curiosity. Finding this book leads her to the idea that all she needs to do is find someone willing to pose naked for her under the guise of her working on a nude drawing.

So next stop is the art club at school, currently home to a single member – Shoichi Honda. He’s overjoyed that someone finally wants to join the club, especially a cute girl like Yumeko, but his world is about to turn upside-down when she asks him to undress for her. And even if he agrees, is once going to be enough for our phallus-obsessed heroine?

As always, Shuzo Oshimi takes the natural curiosity and lust found in your average teenager and dials it up to eleven, unafraid to confront head-on the feelings many of us may have had. Yumeko is less fascinated by sex (although that’s part of it) and more by the unknown, of something that not having herself she has no ready access to seeing. As always with this author’s work, the true intent behind what’s going on is obvious to us, the readers, but not at all for the characters, as their lives become increasingly messy and unhinged until they figure it out.

The biggest issue is that both Yumeko and Shoichi are fairly flat as characters, serving as devices to move the story along, rather than as their own people. Shoichi in particular is very bland with his personality boiling down to being unable to say no to the first girl who has ever given him any attention. I appreciate it’s tough when there are only six chapters to tell a story and, given the premise, Yumeko has to be single-minded in her interests, leaving not much room for anything else. Yet I can’t help but feel this is a story that Oshimi would have done more justice to now than he did as his debut work. At the very least his later single-volume manga are better at accomplishing a lot more with their cast these days. It’s certainly rare for the characters to come off as one-note as these two do.

That said, I still came away from this having enjoyed it more than, say, Devil Ecstasy. It’s reasonably grounded for what it is and as I’m an Oshimi fan, it’s interesting to find that the things I like about this author have always been present in his work. The artwork is quite good, despite an evident lack of polish. There are a lot of scenes throughout the book where the characters are off-model, coupled with the general problem that Yumeko’s eyes are a bit too big for her face. But backgrounds are detailed when they need to be and Oshimi has come up with some humorous ways to show Yumeko’s obsession by showing how she draws penis-shaped objects all the time in weird and wonderful artwork.

Avant-Garde Yumeko comes to the West thanks to Kodansha via their Vertical imprint and has been translated by Winifred Bird. The translation reads well with no issues of note. Kodansha has another of Oshimi’s early works, Sweet Poolside, due for a release in January 2023 so if you’re a fan of his, there’s plenty more to come, alongside his ongoing works.

Overall, Avant-Garde Yumeko is a very unique manga from an author that at this point you’ll either love or hate. Just as with Devil Ecstasy, I’m not convinced that this is a good starting point if you’re unfamiliar with Shuzo Oshimi. However, existing fans will want to see where it all began, and this is an entertaining experience even while flawed.

A free preview of the manga can be found on Kodansha’s website here. 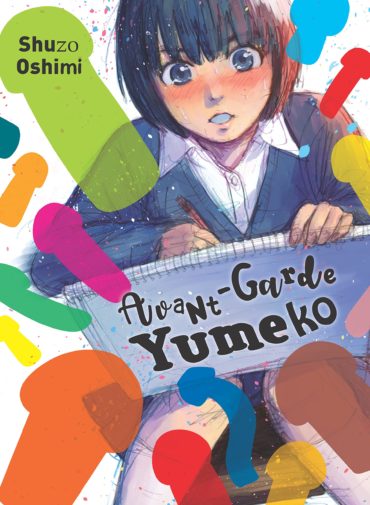