Known for his distinct eccentric style that has produced hits from the bizarreness of Mind Game to the feel-good family fun of Lu Over the Wall, Masaaki Yuasa now turns his attention to the pages of history with this adaptation of Hideo Furukawa’s 2017 novel, Tales of the Heike: INU-OH.

Set 300 years after the Genpei War, the battle over control of Japan between the Minamoto/Genji and Taira clans, the film follows the lives of two distinct characters who are brought together by shared frustrations with the status quo.

After being roped into the controlling government’s hunt for the imperial regalia to prove their right to rule Japan, young Tomona’s life is turned upside-down after his father finds and unwittingly unleashes the power of the sacred sword, Kusanagi-no-Tsurugi, cutting himself in half and rendering Tomona blind. Haunted by his father’s ghost, Tomona sets out on a journey to avenge him, but ends up bumping into a blind travelling biwa player. Taken under the biwa player’s wing as his apprentice, Tomona travels to the capital and joins the main troupe there, performing government-approved songs telling the Tales of the Heike.

It’s here in the capital that he meets Inu-Oh, a talented but struggling Noh theatre performer who not only has hideous deformities after being afflicted by a curse but is also possessed by the ghosts of fallen Heike warriors. With Tomona being blind, he can’t see Inu-Oh’s deformities like everyone else, so the two quickly bond and become friends. After finding out about the spirits that haunt his friend and with both frustrated by their lack of freedom to showcase their talents, Tomona and Inu-Oh form a new performing troupe to tell the stories of those spirits, which may just help release Inu-Oh from his curse.

While the central story of this film is quite simple, being a rags-to-riches tale of two unlikely characters becoming the rockstars of their day, there is actually a surprising amount of depth in its themes, touching upon the societal and political goings-on at the time, as well as exploring fantastical elements with spirits and curses. If you’re into Japan’s history, myths, and legends then you’ll particularly find the opening part of the film fascinating as it builds in that specific context, however it does fade away to make way for the actual meat of the story, which is more about the oppressed situations our two leads find themselves in. The way these are represented will be easy to identify with as they can very much be applied to the modern day, with an anti-establishment angle being pitched in the background as the controlling Genji government wrangles the media and arts to only tell their version of the story, while creative types will surely be able to sympathise with that fight to gain an audience that truly appreciates what you are trying to do. It’s very reminiscent of the 60s and 70s with the emergence of counterculture and anarchist punk rock bands like The Sex Pistols which the film seems to really take inspiration from.

There’s also a brighter angle in carrying across a message of being able to do what you want and to reach for your dreams, and I think the film conveys that really well through the way the main characters are portrayed and developed over the course of the story. To take them both from being these downtrodden individuals to absolute superstars is a joy to see on its own, but it also builds in plenty of twists to them as they go through certain events, creating a complex duo that, by the end, are completely unrecognisable from who they were at the beginning.

The trade-off is that the film’s side characters aren’t nearly half as interesting, despite them being major movers in terms of the plot. Inu-Oh’s father and the ruling shogun, Yoshimitsu Ashikaga, play the villains to each of our lead protagonists and come at them as you would expect and have fairly one-dimensional characterisation.

Where the film absolutely shines though is in its visuals and in particular its audio as, my word, this is a sensory tour de force. Yuasa has always placed a heavy focus on music throughout his work, but a lot of that pales in comparison to Inu-Oh, where the songs Tomona and Inu-Oh perform meld together traditional instruments and singing style with full rock-opera theatrics, filled with drums, blazing guitars and elaborate sets that get crazier and crazier with each rendition. It might seem weird placing such a modern sound in what is an historical fantasy film, but it manages to come together in a very satisfying way as you see the people of the city go through the equivalent of Beatlemania over these two oddball performers. It does however fall down when it comes to pacing, as the second performance in particular drags on for far too long, while by the time the third one comes around, the setup itself feels too formulaic.

While these performances are treated as the highlights, the rest of the film is also incredibly well animated and drawn, really pulling off that unique Yuasa and Science SARU look. There are some really artistic moments, particularly early on, as it tries to portray Tomona’s lack of sight and reliance on sound by throwing in shots of white that are painted in with vibrant colour as other characters around him speak or shuffle about. It’s just a great visual representation of Tomona’s senses and really helps you get into the mind of the character. Meanwhile it carries across 14th century Japan really well, with some fantastic background art and setting that realistically depicts what life might have been like in Kyoto at the time.

Outside of the big performances, Yoshide Otomo’s score works fantastically with the setting, filled with traditional instruments but also working in more subtle modern tones to reflect the modern-day relevance of the story. The voice acting across the film is also really good, and the two leads truly deliver in their performances, considering their lack of experience with anime. Mirai Moriyama has to deal with a character that changes significantly in tone across the course of the film but really keeps up and goes all out in the introductions to Inu-Oh’s performances in particular.

Overall, Inu-Oh is a stellar audio-visual experience that needs to be experienced on the big screen for its beautiful and artistic animation as well as its rock opera theatrics that drive home a story that pushes not only the value of pursuing your dreams, but offers a very interesting societal and political message that really makes you think about and empathise with the characters and the situation they find themselves in. While these factors mark it out as one of Yuasa and Science SARU’s strongest films to date, it’s still not quite perfect, with issues in how it paces some of its musical segments and the lack of interesting characterisation of the villains of the piece.

INU-OH will be screening in cinemas across the United Kingdom from the 28th of September, while those attending the Glasgow leg of Scotland Loves Anime can catch the film there alongside a Q&A session with the director himself. 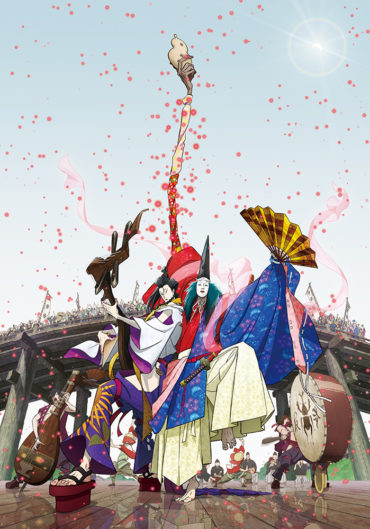 Known the world over for hit anime like “A Silent Voice” and “K-On!”, celebrated anime director Naoko Yamada sat down with us to discuss her recent move to Science SARU, LGBTQ+ themes in anime, and more!