Student Al Adley is a suspect in the troubling case of the murder of London’s mayor. His flatmate is dead in what looks at first like suicide, throwing himself beneath a tube train – or was he pushed? D.I. Ellis, investigating the mayor’s murder (in spite of recovering from injuries that means he’s just about getting around with a crutch), makes contact with Al. Al has just discovered a blood-stained knife in the pocket of the jacket he was last wearing when he happened to be on the same tube train that the mayor’s body was discovered in and tells the detective about it. Has Al been framed? Is someone watching his every move? He’s been trying to find out more about his birth parents (he was adopted as a baby) so, could there be a link there? Sadly, it turns out that his mother is dead but he now has a photograph of her, given to him by her sister, taken with friends when she was a student. Ellis, who is haunted by shades from his past when his haste to solve a case led to a tragic outcome, decides to shelter Al and takes him back to his flat. They agree that Al is to carry on with his daily life but must never use the same route twice to come and go.

Meanwhile the police investigation proceeds, with humourless Superintendent Grant on the case, aided (somewhat against her will) by Yuki Howard, Ellis’s long-time plainclothes detective colleague and friend. First of all, Al is called into the police station for questioning. And then, inevitably, Grant insists on searching Al’s flat (without a warrant!) and Ellis tips Al off, advising him to be there when the police arrive. Al is on tenterhooks as the police rifle through his clothes, certain that they’ll find the knife (he left everything where it was on Ellis’s advice) – and then he’ll be arrested. But they find nothing.

In many ways, this is a transitional volume. After the discovery of the mayor’s body on a tube train in Volume 1, Shima Shinya uses the second volume to delve more deeply into the police investigation, setting it against the uneasy relationship between prime suspect Al Adley, and the world-weary, experienced police detective inspector Ellis, who’s shielding him. Ellis knows that there’s far more to the case than his overworked colleagues want to believe as they pursue the most obvious line of inquiry in the desire to get the case swiftly wrapped up, one way or the other, even if it means arresting and charging the wrong person. He’s determined never to be involved in such a case again as he’s still haunted by the past.

Al is Asian (on his birth mother’s side), Ellis is black and Yuki is Japanese. All three of them have suffered from racial discrimination and people’s prejudices based on their outward appearance, so it’s not surprising that all three quietly sympathize with each other’s negative experiences. There’s also a telling encounter when Ellis goes to call on the mayor’s widow, Emma King, and she acknowledges that she was aware that her husband of twenty years had been behaving strangely during the last year. “It didn’t matter if I didn’t come first in his mind,” she says, “because the children are more important to me than he was.”

Shima Shinya’s art is as striking and different from conventional manga art as in the first volume; she’s especially good at evoking the bleak wintry London streets where she’s set her murder mystery. She’s equally good at capturing the interactions between characters; veteran police detective Ellis really comes to life here, especially in his scenes with Yuki (including their first meeting twenty years ago). And whenever he and Al are together, a rather charming ‘father-and-son’ vibe occasionally comes across as they bicker over the state of Ellis’s untidy flat (Al is something of a neat freak) or Ellis forgetting to tell Al something really important (did he really forget?).

The translation for Yen Press is again by Eleanor Ruth Summers and reads smoothly, as before. No colour pages inside this time, just stark black and white (with gray shading).

There’s sadly only one more volume to go (January 2023) in this well-written and stylishly drawn mystery but I hope that Yen Press will bring us more from this gifted mangaka. Shima Shinya is definitely a talent to watch! 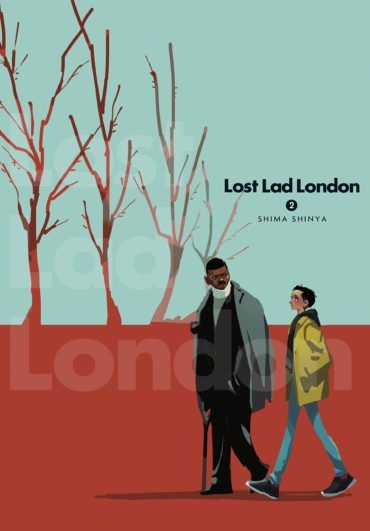 Student Al Adley finds his quiet life turned upside-down when he’s interviewed by the police searching for the murderer of the mayor of London. A taut and twisty murder mystery manga set in our very own capital city!

Is Al Adley going to be falsely accused of the murder of Mayor King? Does D.I. Ellis still believe in Al’s innocence – and how can he save the student when someone, perhaps the real murderer, is leaking information about Al to the media? Find out in the third and final volume of Lost Lad London!

Tales of the Kingdom Volume 1 Review

Tales of the Kingdom leads the reader into an exotic fantasy alternate world, brought to life by Asumiko Nakamura’s striking artwork.