In the faraway kingdom of Sharibalte, a young boy called Adolte is raised by his nurse, kept imprisoned, far from the company and gaze of others. After her death, he is all alone – until one day another boy comes to visit him, late at night. He is Adalte, crown prince of the kingdom and apart from the colour of their eyes, the two boys are identical in looks and stature. After this, Adalte visits Adolte every night, telling him about the palace and his daily life until one night, Adolte suggests that they change places so that he can see the outside world for just a single day. Adalte agrees, they swap clothes and Adolte leaves the cell in his stead – and never goes back. Years pass, and the crown prince Adalte (really Adolte) is told to make himself ready for the ritual of purification. He is to be a sacrifice. He’s been set up, betrayed by his own brother. But the story of the twins is far from over yet…

The second tale in this volume is that of ‘The King and his Aide’. At first, we meet black-haired ‘Han’, aide to the ‘Moonlight King’ who lies dying as the story begins. Han has been working in secret for the king’s younger brother to remove the king from the throne… but the king has realized – too late – what’s happening. A flashback takes us back to Han’s arrival at the dissolute royal court – and his first meeting with his royal master. Betrayal begins to seem like a recurrent theme in the stories collected here.

The narrative then spirals further back in time to show us Shao and Dao, twin brothers of the nomadic and warlike Han people, growing up in the desert, learning to tame and ride the fearsome wild steeds. A tradition of the Han means that all younger sons are banished; only the eldest can stay – and as the boys reach their sixteenth birthday, they must undergo a cruel ritual to decide which of them can stay.

Yen Press has decided to release this series in hardback (with a glossy dust jacket) and some of the manga is in colour, making this a highly desirable purchase if you’re a fan of Asumiko Nakamura. But it will also appeal to newcomers to the mangaka’s work as it demonstrates what makes her work stand out from so many other competing titles in a crowded field: the ability to tell a story economically yet utterly convincingly in images. She knows how to ‘work’ the page and how to position the images in just the right place to evoke the desired response in the reader. The Middle Eastern/Arabian Nights-style fantasy setting brings out a certain flavour of Aubrey Beardsley’s art (or perhaps it’s a homage) in one or two images – and yet the beautiful art is unmistakably her own, distinctive work. One of the ways she shows us that this is not our world, even in a historical context, is the ‘horses/steeds’ she’s designed that play a significant role in both stories; they are a little like giant ostriches with featherless bodies and vestigial wings yet with dragon-like heads and fearsome fangs.

The mangaka manages to capture that elusive, detached quality that fairy tales or legends often possess – fascinating the reader yet also distancing them from the characters and events. Tales of identical twins can be found in Western literature from Alexandre Dumas’ The Man in the Iron Mask to Mark Twain’s The Prince and the Pauper and yet the mangaka brings her own unique take on the theme with plot twists to keep the reader turning the pages. We’re more familiar with Asumiko Nakamura’s ongoing Boys’ Love series Doukyuusei (Classmates) which is as slice-of-life as you can get, yet never predictable in the way she depicts the everyday lives of her characters and graced by her distinctive drawings.

The translation for this hardback edition for Yen Press is by Lisa Coffman and it utilizes the simple yet direct style of storytelling that’s just right for a book of fantasy tales. Volume 2 is scheduled for November 2022 and the series is ongoing in Japan, Volume 4 having recently been published.

(Amazon UK has this as ‘Reading age 13 years and up’ but Yen Press have shrink-wrapped the book and added a parental warning, rating it ‘M Mature’ – and in this case, I think that’s understandable.)

In the first volume of Tales of the Kingdom, the mangaka’s spare, elegant graphic style brings grace and beauty to her evocation of a far-distant fantasy land. Seeds of wonders and tragedies to come have been sown but it’s too early to tell how they will develop although, given the artwork, it will be a pleasure to turn the pages! 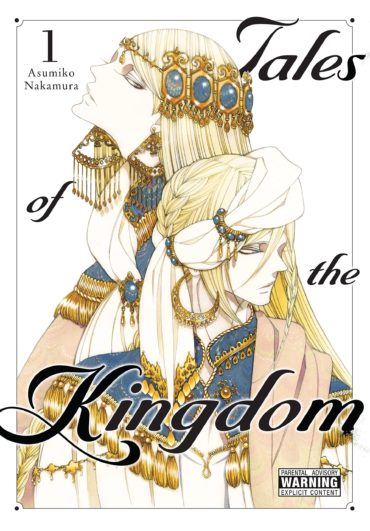 Title
Tales of the Kingdom Volume 1

After the mayor of London is found stabbed to death on a tube train, student Al Adley is prime suspect – even though he just happened to be on the same train. As the police close in on him, he’s sheltered by an unlikely ally: D.I. Ellis. But can he be trusted?