Magia Record: Puella Magi Madoka Magica Another Story is the latest manga spin-off from the Madoka Magica franchise, this time giving us an alternative re-telling of the franchise’s mobile game, focusing more on the original anime’s cast and how they become embroiled in the events taking place in Kamihama City.

Our main character here is Mami Tomoe, who has noticed that there has been a strange decrease in the number of witches in Mitakihara recently. As magical girls depend on witches to replenish their magic to survive, any drop in their numbers is a worry, as it puts other magical girls at risk of turning into a witch themselves, as well as causing them to hunt further afield for their prey. This is how Mami meets up with Kyoko Sakura, who is also facing the same situation in Kazamino. After discussing the situation, Mami decides to investigate further and explore the neighbouring towns to see if she can find anything strange.

On reaching Kamihama City, she finds an abnormally high number of witches who all seem to be much stronger than those in Mitakihara and are really giving the local magical girls a hard time. As she meets and helps some of these magical girls, Mami begins to uncover a new kind of magic, neither magical girl nor witch, that is causing magical girls in the city to disappear. Can Mami figure out what is going on before both all the magical girls and witches vanish?

If you’re an existing fan of the franchise, then you’re going to feel right at home jumping into this particular manga, as it reunites you with the characters and concepts you know and love and sticks true to how they are portrayed in the main anime series, all while giving them a whole new threat to put them through their paces. The character artwork is faithful to the original designs, and there’s plenty references and Easter eggs to fan-favourite moments scattered throughout the story. For example, there’s a fake-out in the opening chapter that hilariously alludes to Mami’s infamous fate, while Kyoko is seen chomping on apples and Kyubey sneaks around as usual with its sinister face getting some occasional full-panel treatment that really harks back to the anime’s scene composition.

You can tell through this there’s a heavy assumption that the reader is an existing fan, so while this is definitely not something a newcomer could get into, it does use this to its advantage by knowing it can bat around lore about witches and magical girls without having the need for any exposition dumps, meaning it can get stuck right into the main story.

This is where its greatest strength lies, as even though you might be familiar with some of the finer points, it’s great to see another side to events. In particular it gives a more solid reason for the original anime’s cast to appear, other than being glorified fanservice cameos, where it feels like Mami’s actions really matter in terms of uncovering the overall plot. And as this isn’t just a simple re-tread, it does plenty of new things with the Magia Record characters too, who are in a very different place from where they were in the original story.

While seeing all of this was a joy, I couldn’t help feeling a little disappointed that it was missing some of the tense fights and creepy witch worlds that give the rest of the franchise its unique style. This opening volume concentrates solely on building up the mystery, cutting away from action sequences nearly completely. While this works in focusing the attention on the characters themselves and the strange goings-on that they find themselves in, it does make things a bit disorienting when it looks like it’s going into a fight, then you’re suddenly in the aftermath, with it all having taken place in the background.

Overall, it just comes down to the narrative style being focused more on telling the story through the dialogue, as that’s really where you get most of the information from. The background art is kept very simple as well, so you rely more on the actual speech and the character art to keep moving you along through the book. Thankfully, the translation by Noboru Akimoto is top-notch with no particular issues and is paired with good and consistent lettering by Abigail Blackman that is easy to read.

Magia Record: Puella Magi Madoka Magica Another Story is published by Yen Press and this first volume is well presented and sits nicely alongside their other releases in the franchise.

So far, Magia Record: Puella Magi Madoka Magica Another Story reads as one for the fans looking to dig more into the Magia Record part of the franchise, as it sets up a good alternative and more mystery-oriented take on its story, while better using the original anime’s cast of characters. It’s just a shame that the focus on the core mystery presented here has let the action sit by the wayside, as that and the sparse artwork are the only things holding this back from being a great instead of a good. 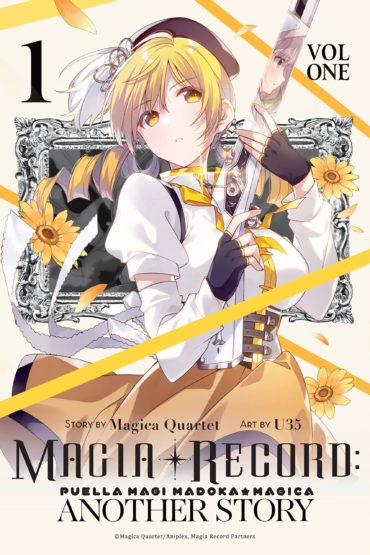 This review is for the theatrical release of the live action Black Butler movie.  It used to be the case that UK fans could only dream of being able to watch the live action adaptations of their favourite manga titles in the cinema outside of specialist film festivals. Lately, however, it feels as though we’ve been spoilt rotten … Continued

The combination of beguilingly attractive art and an intriguing story concept in Rihito Takarai’s ‘Graineliers’ will appeal to readers in search of something truly ‘different’.