Readers may already be familiar with the name Warlords of Sigrdrifa thanks to the anime adaptation that aired back in 2020, written by Re:Zero author Tappei Nagatsuki. Now Yen Press has brought the first of the prequel light novels Warlords of Sigrdrifa Rusalka to the English market for those looking to sample more in the franchise.

The story takes place on Earth where humanity is threatened by mysterious Pillars that appear suddenly and leave mass destruction in their wake, before retreating temporarily. To fight back, the Norse god Odin has gifted some young women with the title of Valkyries. They can pilot Deus ex Machinas (special magically enhanced planes based on those used during World War II) and are capable of defeating the Pillars in battle.

While the anime series was set in Japan, this series takes place in Europe and follows Rusalka Evereska, a second-generation Valkyrie. One day she meets Amy, the single member of the first generation renowned for her success on the battlefield, who goes around supporting whichever areas need more firepower or find themselves on the brink of being wiped out. The two form a close friendship and eventually, Rusalka and her squad are invited to join Amy and form a new unit that fights on the frontlines.

Amy is humanity’s hope, but the second generation of Valkyries struggle to keep up with her, due to lacking the same level of proficiency or, simply, power. Even Rusalka’s unit (whose members are unusually talented) isn’t without problems during the few missions they take together with Amy. Because of this and because Rusalka lacks confidence in her abilities, she turns down the offer which hurts Amy and the rest of her comrades who have chosen to move to the new unit.

Not long after, Rusalka learns that Amy and her friends have been wiped out during a mission. Full of remorse for not having joined the squad, Rusalka retires from her role as a Valkyrie and sinks into a depression. This continues until she meets Alejandro Ostley, someone who, just like Amy, may be about to change her fate forever.

In Japan Warlords of Sigrdrifa Rusalka was released over two volumes, but for the English release, Yen Press has combined them into one thick omnibus. While I’m usually not a fan of that approach, I think this time it works out since Volume 1 is very much Rusalka’s origin story while Volume 2 makes better use of the overarching storyline. So, we get the best of both worlds.

I haven’t actually watched Warlords of Sigrdrifa, so I picked this collection up blind, going only off of the synopsis and the fact that I am a fan of Nagatsuki’s work. Despite having no prior knowledge of the series, I enjoyed this release a lot. As always, Nagatsuki as an author manages to betray the readers’ expectations and deliver something far more interesting than you’d first expect.

Early on, I expected Rusalka would join Amy’s group and the two books would be about her missions there, so I was shocked when within the first chapter or two that didn’t happen. I’m glad it went in this direction instead because it gave Rusalka’s story a lot more emotional weight than it would have otherwise. And, like I said earlier, this is nicely balanced out by the second book which does see Rusalka taking part in routine missions more actively with a new squad, so we get to experience that sort of comradery and daily life.

This balance of highly emotional situations and life-or-death battles is in keeping with Nagatsuki’s strengths, as readers of Re:Zero will be very familiar with. The battle scenes flow well with ample amounts of tension. They’re detailed enough for readers to grasp a clear picture of the scene, but don’t get bogged down with long descriptions. They’re just light enough to keep you turning the page quickly, eager to find out what’s next, much like other works from the author. Perhaps most importantly, by the time I got to the end of this collection, I found myself eager to check out the anime adaptation to learn more about the world and characters there.

As previously mentioned, Warlords of Sigrdrifa Rusalka comes to the West thanks to Yen Press and has been translated by Dale DeLucia. The translation reads well with no issues to note. This release is a hardback that includes colour pages at the beginning (illustrated by Takuya Fujima), but due to this being a 2-in-1 release the illustrations at the start include those from Volume 2, so you may want to skip past them until you’re done reading the entire book.

In Japan Warlords of Sigrdrifa has a second two-volume prequel series subtitled Sakura, which is set in Japan instead of Europe. It’s unclear currently if Yen Press also holds the license to these or if they’re a separate license. At least for now there’s nothing further in the schedule, so we may not be getting those anytime soon – which would be a shame!

Overall, Warlords of Sigrdrifa Rusalka is something that existing fans of the franchise will be eager to get their hands on. Meanwhile, newcomers looking for a new fantasy by this popular author or who have a passing interest in the series will enjoy themselves as they follow Rusalka’s struggles to come to terms with her place in the world. 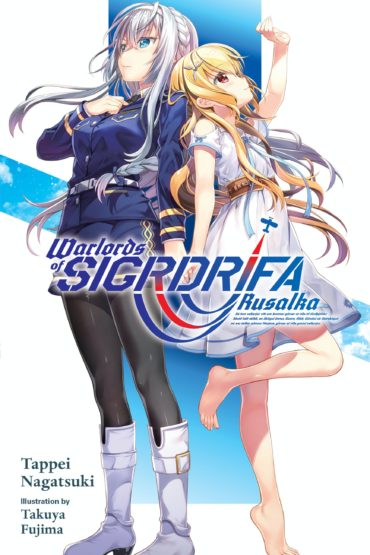