One genre I am a particularly big fan of is a mystery, especially if the protagonist is a plucky young detective. Unfortunately, this is also a sector in manga and light novels that is often overlooked in favour of more fantasy/isekai. So, you can imagine my joy when Yen Press announced Volume 1 of Your Forma, a sci-fi police procedural that looks set to tick all my boxes. Does it deliver? Let’s find out!

In an alternate 2023, everyone has a Your Forma, a VR interface of sorts that users get access to, thanks to a computer chip planted directly into their brains. This allows them to browse the web, make phone calls, send messages and interact with the world around them all through their mind and without the use of any kind of phone or computer. Unfortunately, there is currently a virus going around that infects the Your Forma and causes people to see horrible blizzards and land in the hospital with hypothermia symptoms – if they don’t pass away before receiving treatment.

So, it falls to the electronic investigator and our protagonist Echika Hieda to get to the bottom of this case before more people die. Thanks to the Your Forma, everything the user experiences (and even their emotions) is recorded and people like Echika can ‘dive’ into their minds to look for evidence in criminal cases.

To do this Echika must work with a partner, someone who prevents her from diving too deeply and losing her sense of self. Still, Echika is something of a genius and her ability to process what she sees is too high for her human companions. They often find themselves collapsing and ending up in hospital due to not being able to match her processing power. Thanks to this, Echika has a bad reputation, and no one wants to work with her, so she tries to keep herself closed off to those around her, reasoning it’s only a matter of time until she has to swap partners again, so why bother getting close to them? Plus, she’s left shouldering the guilt about the number of people she’s made collapse over the years.

Because her department is getting short-staffed due to Echika putting so many of her partners temporarily out of commission, in this case, Echika is partnered not with a human but with an Amicus, an artificial human. Echika is resentful of this, since she can’t stand Amicus (for reasons the novel slowly shares with us), but her new partner, called Harold Lucraft, may yet prove to be more than a simple AI and, if nothing else, if she wants to solve the case, she has no choice but to work with him!

Perhaps the best way to describe Your Forma is that it’s a police procedural. I’m sure we’ve all watched plenty of shows with stories like this, where the ace detective gets partnered up with someone they hate, due to unfortunate circumstances, and they spend most of their time bickering. Echika and Harold’s dialogue is fantastic as they wind one another up no end; in many ways, it’s hard to believe that Harold isn’t human – a common theme throughout the book, as we see that not all Amicus are like him.

The Amicus element sort-of reminds me of Time of Eve or Sing a Bit of Harmony, where it’s obvious that author Mareho Kikuishi wants to talk about the future of robotics and AI. While Your Forma doesn’t go hard on talking about the rights of AI and how they should be treated, there are minor comments made here and there that make it clear this is an important part of world-building even if it’s not at the forefront of things. I wouldn’t be surprised if it became a bigger focus in Volume 2 or 3.

The one thing that may put readers off is simply the fact this is an alternate take on history, and it’s not even set in a far-flung future. The development of the Your Forma and the Amicus both come about because of an outbreak of viral encephalitis in 1992, which becomes a pandemic very similar to COVID. The idea that history could have changed so much is perhaps not realistic. However, Kikuishi manages to keep it interesting with some thoughtful commentary that ties into our current modern-day world.

For example, the Your Forma adjusts itself to every user by showing them articles and social media according to what they’re interested in. It’s the height of the personalisation we see individual websites attempting right now, but it does lead to everyone being trapped in their own little ‘bubbles’ which is not too dissimilar to our daily lives on the internet. Again, how much you enjoy this book will come down to how much you care for this kind of social commentary.

But even putting aside the sci-fi and setting, I think you can get a lot out of just the crime drama side of things. Erika and Harold’s relationship may be strained, but they make a good team and watching them slowly work through the case and reach their eventual answer is interesting to watch. The setting can also offer quite a big variety in cases going forward, which should help keep things fresh if you are here for the crime drama side of things rather than the rest.

Your Forma is author Mareho Kikuishi’s debut work and this first volume won the 27th Dengeki Novel Prize. Because of that, it reads like one complete story and although the ending is left open enough to continue into Volume 2, readers could stop after this one entry and be perfectly happy with it.

The series is ongoing with four volumes in Japan, but I do worry that it may run out of steam due to the overly ambitious setting. I think it would be easy for the more futuristic sci-fi elements to get silly (and even this book gets dangerously close to that), but if Kikuishi can keep the human drama fairly level-headed as we see here, then it should work out okay in the end.

As this review suggests, there is a lot crammed into this book. Not only with the setting and the investigation but also with Erika and Harold as characters. They both have a lot of history that Kikuishi goes into in detail; this helps to round out their personalities and make them something more than simply genius and unlikely assistant. Somehow, this all comes together quite well and I was left with plenty to think about once I finished the book, which is always a good sign and a positive one for the future!

Your Forma Volume 1 comes to the West thanks to Yen Press and has been translated by Roman Lempert. The translation reads well with no issues to note. Illustrations for the series are handled by Tsubata Nozaki (mangaka for Hatsune Miku: Bad End Night) and while they’re largely all character profile shots, I did find myself liking them. The series mostly takes place in Europe (although Erika herself is Japanese) and the illustrator does well to offer more realistic designs as opposed to the more ‘anime’ style we usually see. Of course, all of the characters are still very attractive, so we haven’t quite left the realms of anime behind! The colour illustrations at the front of the book in particular are very eye-catching.

Volume 2 is currently scheduled for an English release in October and Yen Press also has the manga scheduled for a release starting in January 2023. So, plenty more of this to look out for in the coming months!

Overall, Your Forma proves to be an intriguing new sci-fi series. Not everyone will find themselves invested in the setting, but if you’re a fan of buddy-cop dramas then this is certainly worth checking out. There’s nothing else quite like this currently running (except perhaps Psycho-Pass?), so the originality of it is sure to draw readers in. 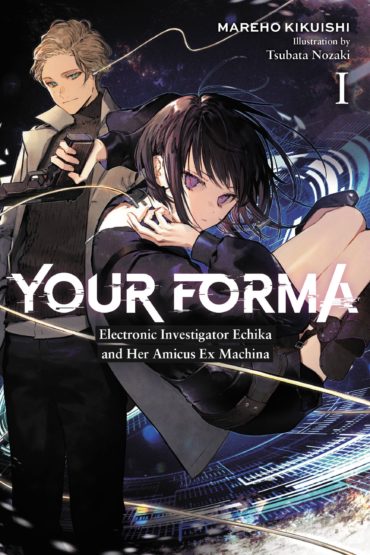