The anime adaptation of My Isekai Life may have been and gone, but there’s still plenty more of this series to look forward to as Square Enix continues to release the manga adaptation in English. As protagonist Yuji rises through the ranks at the guild, what challenges await him? Let’s find out!

Volume 3 opens with the village of Phastan coming under attack from a hoard of angry monsters which Yuji realises are connected to the cursed magic stone he found during a quest back in Volume 2. Naturally, the village is ill-prepared to deal with so many powerful enemies all at once, so it’s up to Yuji and his party of slimes to defend everyone from harm.

Luckily, Yuji is victorious against the monsters but now he’s regarded by the villagers as a hero and that’s making it difficult to get any quests done! With no other choice, Yuji decides it’s finally time to leave Phastan behind and head out to a new destination! Our hero decides to head to the town of Kilia, which should offer a more extensive variety of quests, thanks to being bigger than Phastan.

When Yuji arrives and registers himself with the guild, the receptionist there immediately has a job in mind for his skillset. Yuji is invited to join a party with adventurers Rodis, Tina and Lisa, who are going on a quest to track a rock dragon. This should be an easy task for the group, but nothing ever quite goes to plan, and Yuji finds himself growing concerned about the group when he learns that Rodis has a bad reputation in the town…

Besides the slimes and Proudwolf (a wolf monster tamed in Volume 2), Yuji has never partnered with anyone before, so he’s already on his guard about the humans he’s teamed up with. Yuji being so prepared for a betrayal proves useful when Rodis does indeed betray the group on their first night together, outing himself as a member of a local bandit group! Now if only that was the only thing Yuji had to worry about on this quest…

Compared to the first two volumes of My Isekai Life, Volume 3 offers a lot more variety in terms of the setting and characters. Now Yuji has left Phastan behind, he’s getting to meet more new people and monsters than he did before. Plus, now it feels like there is more of an overarching story as Yuji finds himself wrapped up in dealing with what could be a future calamity.

The artwork continues to improve throughout this release too which is great, given the number of action scenes this time around. It’s fun to watch the antics of Yuji’s slimes as well, who can often be found making some silly expressions or generally getting up to no good in the background! I’m not going to say this is the best artwork out there, but I’m still happy to see it getting better as it goes along. Especially given there are 17 volumes and counting, so if you’re enjoying this one, you’re in for the long haul.

My Isekai Life Volume 3 comes to the West thanks to Square Enix Manga and continues to be translated by David Evelyn with lettering by Brandon Bovia. Both the translation and lettering read well with no issues to mention. Volume 4 of the series is currently scheduled for an English release in early December, so not too long to wait for more of Yuji’s adventures.

Overall, My Isekai Life Volume 3 offers us a change of scenery and puts Yuji in some interesting new situations. There’s still nothing particularly unique about this series, but it’s undeniably fun to watch the fights our protagonist and his slime companions find themselves wrapped up in.

A free preview of this volume can be found on the Square Enix website here. 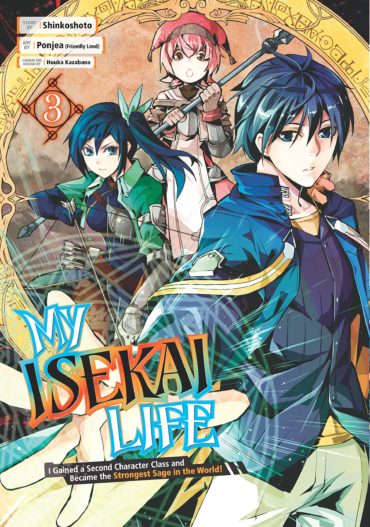 Title
My Isekai Life: I Gained a Second Character Class and Became the Strongest Sage in the World! Volume 3

Wandering Witch: The Journey of Elaina Volume 1 proves an entertaining read with a likeable protagonist and interesting stories. This manga adaptation is the best way to experience Elaina’s tale, with beautiful artwork that conveys the world and characters feelings wonderfully. Both readers new to the series and those who have read the source material will find a lot to like here.