It’s not… like I really wanted… to like other guys or anything. Actually. If I could have avoided it, I would have. Why did I have to be gay?

Takashi Arashiro’s high school life is not going well. He’s become the target of bullies and is constantly being picked on. His only light in the misery of the daily torments is the encouragement of his homeroom teacher Kuroda-sensei – until he happens to overhear Kuroda telling a female colleague, “I’m not prejudiced or anything… but the thought of a guy who’s into other guys… it’s just physically repulsive.” And something deep inside Takashi breaks.

When he emerges from the boys’ cloakroom, he’s changed; the first classmate he meets collapses in terror. In the corridor, other students recoil in fear until Takashi’s chief bully, Naruse, swaggers up and says, “It’s just a stupid mask” and proceeds to try to pull his head off. When this doesn’t work, Kuroda-sensei appears and tells him to take off the mask. This fails too. “It’s pretty gross, isn’t it?” Takashi says. “I’m… like some sort of Kaiju.” I wanted to be something else. “I wish I’d just… died instead.” This, at last, seems to wake up some kind of teacherly instinct in Kuroda-sensei as, recognizing the boy beneath the monstrous head, he switches into a different mode, insisting that he likes his pupil just as he is.

The reactions that Takashi’s Kaiju head provokes in others, especially Kuroda-sensei and bullying Kurose, sets up some painful but much-needed conversations in which Kuroda finally realizes that he hasn’t noticed at all that Takashi has been bullied (what kind of a homeroom teacher does that make him?) and Naruse, still in full-on aggressive mode, lets slip something that causes Takashi to call him out – could it be that he’s gay too?

Takashi undergoes a number of medical examinations (the experts are all baffled), ending up in the office of the director of Midoriyama Hospital, Kouzou Naruse, who tells him that he has encountered a similar case before. When he was working in Canada, he came across a young woman called Stella, born in a female body but identifying as male. Stella’s distress became so great that he manifested a monster’s head (the doctor has a photograph to prove it). Is there hope for Takashi in learning how ‘Stella’ and his family resolved the dilemma? Before any further progress can be made, though, a bitter argument erupts between Dr Naruse and his younger son Junpei who just so happens to be Takashi’s classmate and bully. Next morning, there’s a shock for the Naruse household: Junpei has also grown a Kaiju head.

Some manga are so compulsive a read that you just have to keep feverishly turning the pages until you get to the end. The Gay Who Turned Kaiju is one of those special titles: well-written and aptly drawn. Kazuki Minamoto’s art style is not especially ‘beautiful’ but he really knows how to tell a story in graphic terms, timing his big reveals with page-turns and pacing the panels across the page. Above all, he’s good at creating characters: even though several of the protagonists are far from sympathetic, especially in the way they treat Takashi, nevertheless they resonate as believable, complex individuals. It’s impossible not to root for Takashi whose despair turns him into a nightmare monster from a sci-fi film – or, more precisely, transforms his head into that of a kaiju: green, ugly – and dangerous. The transformation might not end there; if Takashi is pushed too far, who’s to say how monstrous he could become? Will he ever be able to return to normal again? The Kaiju metaphor works remarkably well as we see Takashi trying to accept who he really is and reject the role of victim. The well-meaning (but often excruciatingly tone-deaf) attempts by Kuroda-sensei to understand his student’s distress and to ‘do the right thing’ show the teacher struggling to make sense of Takashi’s anger but just not getting it.

As the story develops, we get to learn more about why Takashi has been the target of bullies; he’s come from another part of Japan and would have preferred to stay there with his best friend from middle school, but his father’s job meant a move to the capital. He’s darker skinned than the other students which has led to him being picked on. “He’s so dark and filthy.” The Older Teen rating is appropriate as this manga deals with the very real despair he experiences. There is discussion of suicidal ideation in the text as well as some disturbing imagery.

This is the first manga I’ve read by the prolific (and gay) mangaka Kazuki Minamoto (also the first to be licensed in English) and I’m very impressed. It seems that he’s also published a lot of josei ‘romance’ titles of a spicy nature and a recent series with a BL twist about a doujinshi circle, Kabe-Koji-Nekoyashiki-kun Desires to be Recognized, has been made into a live-action TV drama this year. The Yen Press edition of The Gay Who Turned Kaiju has been translated by Leighann Harvey with some impressive lettering from Carolina Hernandez that brings Takashi’s moments of rage and self-knowledge to vivid life for the reader. The author’s afterword tells us that this manga began life as a series of short, self-published comics and was discovered by an editor from Beam Comix at a doujinshi event.

Kazuki Minamoto offers no easy answers to Takashi’s predicament – and that’s what makes this such an unusual and convincing read. Recommended. 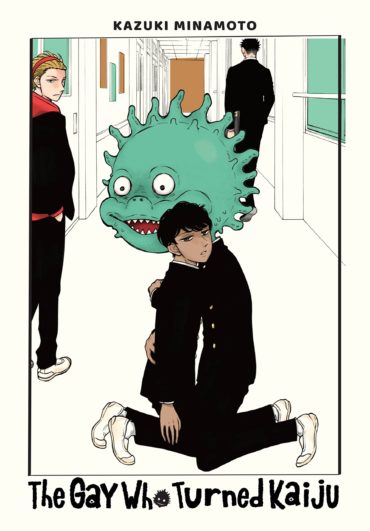 Title
The Gay Who Turned Kaiju