‘Should persons named Edgar and Marybelle appear before the descendants of the Evans estate… said descendants are to donate the entire Evans fortune to them, regardless of their station, nationality, or age.’ 1780 Oswald O., Earl Evans

Three years after bringing us the first collection of the seminal shojo manga The Poe Clan, Fantagraphics have brought out the second and last volume of Moto Hagio’s influential stories from the mid-1970s.

The first story in the collection begins with the writing of a will; an elderly man, Oswald, Earl Evans is setting down his recollections of the extraordinary events that happened to him and his two siblings, Edgar and Marybelle in the eighteenth century. The action switches to the rescue of a handsome boy from a carriage accident; for a long while it seems as if he’s never going to wake from a coma – but then he does and eventually regains his memory, telling the man who rescued him, Lord Henry Evans, that his name is Edgar. When the beautiful Marybelle arrives, the stage is set for a tense family drama of succession, complicated by the machinations of Henry’s ne’er-do-well younger brother Roger. But what’s become of Alan?

In the other stories in the compilation, the vampirnellas are not always centre-stage but wherever they appear, disaster ensues: fire, accidents, murder… Anyone who tries to investigate the ageless three usually comes to a sticky end as Edgar, Marybelle and Alan diligently ensure that no one uncovers or reveals their secrets and lives to tell the tale.

These stories, dating from the mid-1970s, are lively and action-packed, soon dispelling the impression that, given the mangaka’s art-style in depicting the three central characters, everything will be tinged with an effete and languorous haze. The stories have the energy of the comics of the time; the setting might be nineteenth and twentieth century England (1966!) but Moto Hagio uses all the graphic story-telling effects at her disposal and then some. There’s slapstick and subterfuge – as well as bungling police constables and comic turns from servants. Set against this are the more romantic and poetic strands which sometimes feature old English nursery rhymes, such as ‘Oranges and Lemons’, which then take on a distinctly sinister tone.

The difficulty for readers today comes in establishing some deep connection or sympathy with the ageless children of the Poe Clan. These vampirnellas (vampires) tend to turn up out of nowhere, get adopted by a new family (or their descendants) – and then quietly yet ruthlessly wreak havoc. There are a few rather insightful musings from the mangaka in the sidebars as to some of the practical aspects of a vampirnella’s existence: for example, what happens if a vampirnella is destroyed with a silver bullet or a stake through the heart? They’re so ancient that they would instantly crumble to dust and so would their clothes – but what if they’d put on new underpants that day? Would the underpants remain behind? Considering that these manga were first published a little before Anne Rice’s Interview with the Vampire (1976) it’s fascinating to see a Japanese writer’s perspective, exploring the concept of the child-vampire, one who grows old in years but perpetually looks like a child or, as here, a young teenager.

Long, long ago Marybelle said to me, “Edgar, you and I will always be children so surely it’s all right for us to go on dreaming of the flowers and birds of a faraway land.”

With such a weighty (literally!) collection of vintage shojo manga, there are inevitably some minuses as well as pluses. Fantagraphics have again produced a very handsome hardback with plenty of colour illustrations demonstrating Moto Hagio’s skill and subtle use of a range of pastel shades. However, this – and the use of good quality but thick paper – means the book is extremely heavy and unwieldy. Rachel Thorn is a distinguished scholar and translator, but I found myself wishing for translator’s notes to explain why she thanks one expert for ‘his invaluable assistance with the East Anglian accent’ and another ‘for her help with London accents’ resulting in frankly clunky and painful-to-read dialogue such as “No sunshoine. Nuthin’ but clowds an’ fog. An’ now thas’ rain’n!” and “How’d ut goo?” Did Moto Hagio use an equivalent local dialect in Japanese – and was that why these ‘accents’ were thought to be appropriate? Sometimes it’s just better to not resort to renderings of English dialects/accents as it almost always reads and sounds like Dick Van Dyke’s cockney.

The ability of the vampire story to enthrall us is as potent today as when Bram Stoker first published Dracula. However, beautiful as the artwork is, I would argue that the storytelling, which flits from one viewpoint to another, never settling for long enough to establish a connection with the reader, has dated. As has the rather awkward juxtaposition of old-fashioned comedy caricatures (mostly the servants and lower-class criminals) with the beautiful, immortal boys and girls, even in the ‘swinging London’ sections. (I’d guess this influence might have come from British media exports of the late 1960s and early 1970s: Bond films, The Prisoner, etc.). All in all, though, this is a fascinating glimpse into the origins of some of the shojo tropes still current today (though far less, I would argue, the shonen-ai side, defined here by the publisher’s blurb as ‘young men in love’). It’s good to be able to note that Moto Hagio has recently been inducted into ‘The Order of the Rising Sun, Gold Rays with Neck Ribbon’, Japan’s prestigious and second highest state decoration. 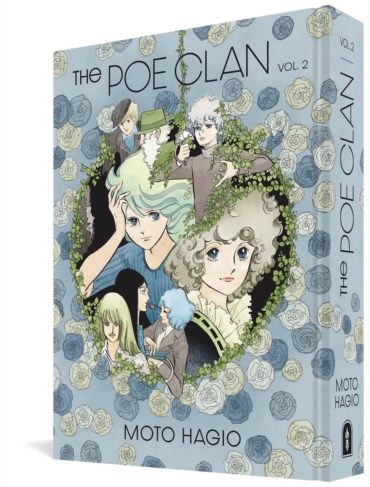 Rangetsu disguises herself as a boy to infiltrate the imperial court and discover why her twin was murdered in the first volume of Rei Toma’s new shojo fantasy manga.

Zom 100 and Junji Ito have two nominations each.

The award for “Best U.S. Edition of International Material – Asia” is between BEASTARS, Cats of the Louvre, Magic Knight Rayearth, The Poe Clan, Witch Hat Atelier, and the Korean manhwa Grass.

We’ve been waiting a long time for the chance to read Moto Hagio’s seminal prize-winning manga The Poe Clan in English – but has it been worth the wait?