“Legend says that a sacred beast appears in the time of a great king.”

Rangetsu’s twin brother, Sogetsu, has been murdered at the imperial palace. It’s rumoured that his master, the fourth prince, killed him. The twins are Ajin and the half-beast, half-human Ajin race are persecuted for being different and treated as a lower class (the younger women are usually forced into prostitution, the men into the military). The only exceptions are boys with ‘special abilities’ who are sent to the imperial palace to act as status symbols or bodyguards for their imperial masters. Rangetsu, broken-hearted, is determined to avenge her brother’s death, so she disguises herself as a boy and sets off to offer her services to the fourth prince, Tenyou, the High Commander (who was Sogetsu’s master). She is highly skilled in martial arts and, after a trial of her skills, is accepted into Tenyou’s service. But it’s all she can do to keep her feelings of loss and anger in check, vowing, “I will kill this man as soon as the opportunity presents itself.”

However, now that Rangetsu has become part of the palace, she begins to see what an intricate web of relationships and rivalries she’s walked into. The biggest surprise for her is understanding that Tenyou is not the cold-hearted, entitled prince she has assumed him to be – and that he was genuinely upset when Sogetsu was killed. And so her self-imposed mission shifts from killing the fourth prince to finding out who is plotting to discredit him within the palace. If her twin was a target, then it naturally follows that she is also in danger. Could it be that one of the fourth prince’s three elder brothers is planning to discredit him – or worse?

Girls disguising themselves as boys has been a favourite romance trope for centuries (see Shakespeare’s Viola in Twelfth Night) with now-classic shojo titles set in the present day such as Hana Kimi and Ouran High School Host Club making good use of this plot device (not to forget My Best Butler currently being digitally published by Kodansha). It always seems far too easy for our cross-dressing heroines to fool everyone in these stories – as if the simple act of cutting long hair short and binding breasts is enough to pull off the deception. And so it is here; the prince thinks, ‘His voice is like a child’s’ and notes that Rangetsu has long eyelashes and a fragile build, and his own (human) bodyguard observes that the newcomer looks more suited to being a dancer than a warrior.

The King’s Beast is the latest fantasy manga by Rei Toma (Dawn of the Arcana and The Water Dragon’s Bride) to be published by VIZ Media in their Shojo Beat range. Even though we’re told that both Volumes 1 and 2 were released simultaneously in Japan, sadly that isn’t the case here and with only three chapters in this first volume, there’s not quite enough material yet to give readers a strong impression of where the plot is going and who the characters are. For starters: even though Rangetsu has sworn to avenge her brother’s death and believes Tenyou to be the one responsible for the murder, when she seems about to do just that, ambushing him in his bed, she doesn’t do the deed. This should be a scene of immense tension – but as we don’t know either of the characters well enough yet to relate to their reactions, it all seems too swiftly and easily resolved. She could have killed him. She didn’t. Passing swiftly on… The final chapter in the book is a bonus chapter for The Water Dragon’s Bride. The mangaka also tells us that The King’s Beast is set in the same world as Dawn of the Arcana, in a Chinese-inspired fantasy kingdom. We’ll just have to wait until May (June in the UK) for the second volume.

Rei Toma’s graphic style is attractive (although not very distinctive) and well suited to her Chinese-flavoured tale of love and revenge. Her use of colour (as seen on the cover art) is striking, yet delicate, and Rangetsu is depicted with a convincing range of expressions as she tries to come to terms with her strange new life.

However, plot-wise, I have some questions. We’re told that it’s only the Ajin boys who pass a special test which reveals whether they have special powers or not (we see this happening to Sogetsu at the beginning of the tale) who are then appointed to serve members of the imperial family, even before their powers have manifested. So why is Rangetsu – who has no such powers – accepted so easily into Tenyou’s service? (It’s glossed over, rather like an editorial afterthought.) And how long has elapsed since Sogetsu’s death? The Sogetsu we see briefly in Tenyou’s household is very much still a child – whereas Rangetsu has the stature of a young adult. The way the timeline leaps around is not very skilfully handled. I understand the desire to hit the ground running with Rangetsu arriving at the imperial palace at the very start but the little flashbacks showing how Rangetsu has arrived at this point in time seem rather randomly inserted.

Translation is handled by JN Productions and reads well with no glaring issues.

A promising start to this gender-swap fantasy, then, but with only three chapters, it’s a little difficult to tell how the story and the central servant-master relationship/romance is going to develop and whether it will distinguish itself from so many others in the same vein. Perhaps after Volume 2…? 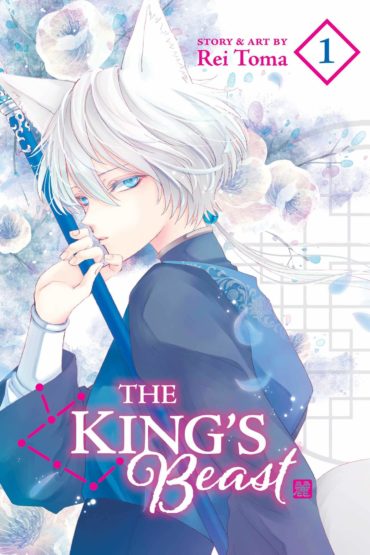