Author Tomihiko Morimi is best known for being the author behind The Tatami Galaxy, Penguin Highway or The Night is Short, Walk on Girl. Before these highly popular works (and their animated adaptations), Morimi started his journey as an author with his debut Tower of the Sun which Yen Press has now brought to the English market.

Like most of Morimi’s work, the story is set in Kyoto where we follow an unnamed fifth-year university student whose life was made better while dating fellow student Mizuo. However, by the time we meet our main character, he has already been dumped by Mizuo and now he spends his days stalking her and lamenting what a great mistake she’s made in letting him go.

In fact, our main character’s heartbreak happened in his third year so he’s been hung up on this for quite some time already. His stalking is finally put to an end when he’s confronted by Endou, a law student who warns him to stop following Mizuo or Endou will call the cops. But with Christmas looming, a time for couples in love to revel in one another’s company, our protagonist can’t simply forget Mizuo and instead wanders the streets of Kyoto thinking about her while also cursing love and those happily experiencing it. He also sets about harassing Endou, after assuming he’s Mizuo’s current boyfriend…

Single, bitter and jealous, the protagonist is hard to sympathise with. This story is written entirely from his perspective (it’s mentioned at the start that it’s a written record of this period of his life), so there’s not much room to get away from his jaded perspective on the world. He’s an eccentric who feels hard done by, not particularly unlike some of Morimi’s other leads, but unlike the author’s other books, it’s difficult to find anything to enjoy about this one.

It doesn’t help that until the halfway point we don’t see many other established characters. Eventually, we meet the main character’s friends, who are also quite jaded about love and the world but they each have their own issues which are a little easy to stomach than our protagonist’s. The book definitely improves at this point since there’s more to get invested in that isn’t this core loop of pining after Mizuo.

If you’re familiar with Morimi’s other works, then you’ll instantly recognise the whimsical way of storytelling we’ve seen in his more recent works. His stories toe the line between realism and fantasy, focusing on protagonists who have their heads in the clouds. Being his first work, Tower of the Sun lacks the polish that makes his stories so captivating, which is a shame, but not necessarily surprising, given there are three years between this book and for example, The Night is Short, Walk on Girl. A writer can come a long way in that amount of time – particularly with more editorial input.

While I am willing to give Tower of the Sun a bit of leeway for being his debut work, I still don’t think this is a book I can easily recommend. Even to other Morimi fans like me, it’s just very difficult to stay engaged with, due to the opinions of the main character. If his actions and thoughts toward Mizuo weren’t quite so creepy or leaning dangerously close to blaming womankind for his being single, it would be easier. You can write off most of the character’s antics as him being in an unstable mental place, but that doesn’t make it easier to read. I hope this isn’t the first Morimi book readers experience because his later work is so much better than this. I’m just glad this one did start improving toward the middle because it was feeling like a real slog until then, which is not something I ever thought I’d be saying about a Morimi work…

As previously mentioned, Tower of the Sun comes to the West thanks to Yen Press and has been released in hardback like the author’s other books. It has been translated by Stephen Kohler and the translation reads well with no issues of note. At the time of writing, the publisher is due to release Morimi’s Fox Tales on November 22nd, so if you’re a fan of the author, you have that to look forward to!

Overall, Tower of the Sun is a challenging read that doesn’t live up to the reputation Tomihiko Morimi’s works have among the English fanbase. It’s interesting to find that most of what Morimi’s work so recognisable is already present here in the debut, but it lacks the polish that would allow readers to really enjoy it. 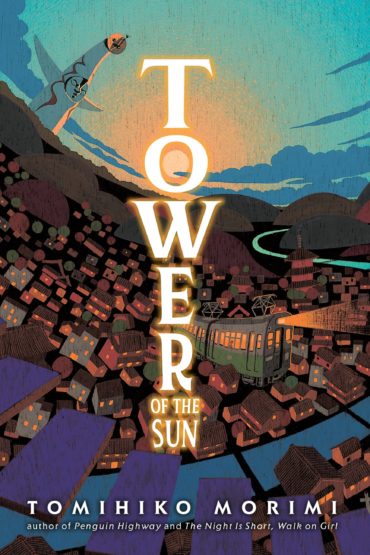 Title
Tower of the Sun