Kodansha’s Vertical imprint is home to some of the company’s more mature output, which the latest release Last Gender: When We Are Nameless certainly falls under. While the imprint strives to offer something different in the market, the question is always whether the titles are a must-read, which I’m here to investigate with this one today!

The story takes place in BAR California, a place hidden away in a back alley of Tokyo. Here anyone is welcome, regardless of sexual orientation, gender or propensity. Although the place is first and foremost a bar, they do also have private rooms for their customers to engage in sexual activities with other patrons if they so wish but owner Yo warns newcomers that this place is not a brothel and the staff will not engage in these activities themselves.

While Yo is the main character, we rarely see the story through her perspective. Instead, Last Gender is a collection of stories about the customers and as such, each one is told from the perspective of a different character. The first one is about Manami, a lesbian who comes to the bar after finding a membership card among her husband’s things. Manami meets Ran, a bisexual transwoman who’s struggling with the cost of transitioning and wishing to find someone who will accept her for who she is.

Manami has spent her whole life being told it’s wrong to be attracted to other women, being pressured by her parents to get married and worried about how her mother and society would react if she dared to admit she’s a lesbian. These feelings extend to the rest of our cast in one way or another. Ran is happy that websites like Facebook are now more accommodating when it comes to offering different labels for gender, but is forever frustrated by the fact society is yet to catch up overall and still treats anyone who’s different as “the devil”.

That feeling of being lost in society and needing someone to be themselves is what makes BAR California so popular. Customers can come here no matter what their background and be themselves, enjoying the company of open-minded people who won’t judge them. Some find friends and some find partners, but most of all, everyone finds the chance to take a break and be who they want to be.

There are five chapters in Volume 1 as well as the one-shot ‘prototype’ chapter from before the series was greenlit for serialisation. Mangaka Rei Taki skilfully contains a single story in each chapter and while these initially feel like one shots all by themselves, as the book goes on, each story begins to build on the last, thanks to a cast of recurring characters. But I do think that limiting each story to a single chapter means the characters often come across as shallow and nothing more than the problems that accompany their identities. This is helped somewhat by the fact they pop up again here and there, but it just doesn’t feel like we spend enough time with anyone for readers to get attached.

I appreciate that Taki is trying to be realistic about how people who stand outside of what’s considered ‘normal’ are depicted, particularly given this is a Japanese work in a Japanese setting where they are harder on this than in some of the Western countries. But at the same time, it does make the manga a difficult read at times because it’s so negative. And that’s reality, I get it, but there’s very little escapism to be found here and in particular, if you are someone who identifies as LGBTQIA+ then I don’t think you’d want to be reading this in your downtime and be reminded of the hardships that come with that.

Where artwork is concerned, I wouldn’t say that the way Taki depicts the characters is overly attractive; they all feel a little out of proportion. There’s not much detail in terms of the backgrounds either although, given how many sex scenes are in the book, I get the impression the creator wanted to make those front and centre. Having this much sexual content does make it difficult to recommend to readers too since although Last Gender can be thought-provoking the sex does somewhat undermine what it’s trying to be. Often I couldn’t help but feel the pages would have been better spent developing the characters.

Last Gender comes to the West thanks to Kodansha under the Vertical imprint. It has been translated by Rose Padgett and I have to say I am impressed by the fact Padgett kept the nuance of how the characters used certain terms (like bisexual for example) in keeping with the way they’re used in Japanese as opposed to here in the West. There’s a page of translation notes at the back of the book that explores this further and made for some interesting reading. The series is complete in Japan with three volumes and Kodansha has Volume 2 scheduled for an English release in February.

Overall, Last Gender: When We Are Nameless Volume 1 is an interesting look at what it means to be different to what society considers normal. It’s thought-provoking but equally a difficult read that’s not without its faults, but for readers who can look past that and connect with it, I’m sure it’ll find an audience. 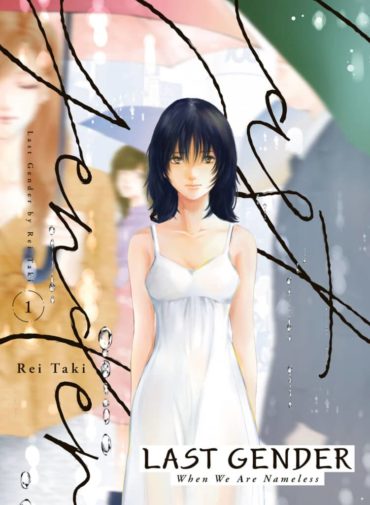 Title
Last Gender: When We Are Nameless Volume 1