It’s certainly a great time to be an Unnamed Memory fan, with Yen Press having just finished releasing the original light novel series in English and an anime adaptation announced for 2023. On top of that, we’ve been treated to Yen Press releasing the manga adaptation in English, which I’m here to check out today. Will it delight fans and newcomers alike? Let’s find out!

the story takes place in the Kingdom of Farsas whose prince, Oscar, has been cursed by the Witch of Silence. This means that any wife he takes in the future will be unable to carry an heir and will pass away. Oscar has spent his life searching for a cure, which leads him to a tower where the Witch of the Aure Moon resides. Should he make it to the top, Oscar will find himself with one of the five most powerful witches in the world who will surely be able to help him break his curse.

Of course, getting to the witch is no easy task; Oscar must first face various traps and challenges before he reaches the top. Luckily for him, he wields the royal sword Akashia which neutralizes magic and makes his trip a lot easier. Upon making it to the top he meets the witch, who introduces herself as Tinasha and is none too pleased that someone has managed to get past all her challenges.

Our protagonist tells Tinasha all about the curse and she tells him it’ll be difficult to break and he’d be better off searching for a woman with a powerful resistance to magic. This leads Oscar to the idea that all his problems would be solved should he marry Tinasha! Naturally, she doesn’t take to this outrageous idea and instead compromises by agreeing to come and spend a year in Farsas where she’ll study the curse and spend time by Oscar’s side.

As a light novel, Unnamed Memory is a thoughtful, emotional read that has a lot of depth and spends its time on worldbuilding. I’ve said in my reviews before that one of the things I appreciate about the light novel is that it feels that time is always passing. However, this manga adaptation lacks that same feeling which is a shame because something seems to be missing as it fast-tracks over some of the interactions we had in the books.

I think for newcomers it could appear muddled. We jump from Oscar looking to break the curse to the ‘will they won’t they’ romance angle now Tinasha is staying in the castle and then a mystery storyline is introduced when a crime is committed during a festival. Safe to say, a lot is happening and while it’s obvious to me that these are the major story beats of Volume 1 of the source material, it does feel haphazardly thrown together here. I’m hoping as the manga goes on, it will work in some breathing space to avoid this in the future.

Having said all that, if you are already familiar with Unnamed Memory, then there’s plenty to enjoy here. Mangaka Naoki Koshimizu’s (The Isolator) art is detailed and attractive. It works well both for the slower slice-of-life scenes as well as those that are more action-oriented. Most importantly, Koshimizu does a good job of conveying Oscar and Tinasha’s personalities through their actions which I appreciate, given their relationship is such a selling point for the whole series. The two bicker, but there’s also a deep bond forming and it’s nice that even here where not as much time has been spent on their development, we can clearly see the affection they hold for one another.

Unnamed Memory Volume 1 comes to the West thanks to Yen Press and has been translated by Jeremiah Bourque with lettering by Chiho Christie. Bourque is not the same translator as the one for the light novels, but the terminology and names seem to align, so thankfully there are no issues here. This release opens with a colour page, one side of which contains a world map which is a nice extra for a series that prides itself on cultivating a deep fantasy world.

The manga adaptation is ongoing in Japan with three volumes, a fourth due out in January. Volume 2 of the English release is currently scheduled for February with #3 following in June. This is an unusually fast turnaround for Yen Press, so I suspect the aim is to overlap with or have everything out for the anime, whenever that airs.

Overall, the Unnamed Memory manga is so far proving a worthwhile read if you’re already a fan of the series. For newcomers, it’s not a great way to experience the story, given it skips over some content and doesn’t give off the same immersive vibe as the light novels but I’m still hopeful Volume 2 may fix some of those issues. One to keep an eye on at least! 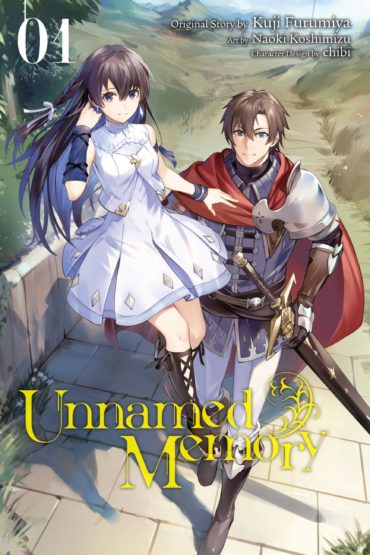