When publisher Yen Press licensed their new series Unnamed Memory, it generated a great deal of discussion, largely because the books were already proving popular in the community. Today I’m here to find out if Volume 1 is a worthwhile read after all that buzz.

Our story follows Oscar, a prince to the Kingdom of Farsas who bears a terrible curse. As a young boy, Oscar was cursed by the Witch of Silence, who made it so that any wife he took in the future would be unable to carry an heir and die. Since then our protagonist has dedicated his life to becoming stronger and seeking a way to resolve this, which has led him to a tower built by the Witch of the Azure Moon.

This witch is said to be the most powerful of the five in the world but to even get to her, visitors must first make it through a variety of challenges in her tower! Of course for someone who wields the royal sword Akashia (which neutralizes magic), the climb isn’t too difficult and Oscar is soon standing face-to-face with the witch, who introduces herself as Tinasha.

As Oscar has passed her challenges, Tinasha agrees to grant one of his wishes, so he asks her to marry him! As a witch, she’s surely powerful enough to survive the curse and it’s love at first sight for the prince, but Tinashe refuses. Instead, she promises to stay with him at the castle for a year, researching his curse to break it and finding a more suitable partner for him. Compromise agreed on, the two spend their days peacefully dealing with any problems in the kingdom and becoming close friends, if not a little something more…

The one thing I absolutely loved about Unnamed Memory is how the characters are handled. While Oscar may have brought Tinasha to the castle, she’s by no means bound to him and she gets up to plenty of things in her day-to-day life without him being present or even knowing. Likewise, Tinasha isn’t always around when Oscar is busy getting himself into trouble with childhood friend Lazar or his other attendants. Considering how most series have the protagonists bound to one another, this is refreshing.

Author Kuji Furumiya has structured the book in such a way where the passage of time is woven into the narrative extremely well. In a lot of light novels, it can feel like nothing happens in the cast’s lives unless we as readers are present, or worse things do happen but they monologue about this in a way that feels unnatural. In Unnamed Memory, the way the characters interact gives off the impression of plenty happening in between the sections of their lives we’re reading about.

This more episodic approach to the story is also a benefit to worldbuilding. While the kingdom of Farsas is regarded as a peaceful place, that doesn’t mean there aren’t those who threaten it. For example, during a festival, a mage is murdered which leads to Tinasha having to investigate. Another story focuses on an ancient beast being unleashed, which Tinasha and co must then defeat or reseal. Everything adds to either the world or the individual characters without feeling forced or unnatural.

Where the characters are concerned, both Oscar and Tinasha are perfectly likeable. Although Oscar has a fairly stereotypical princely personality, he’s kind-hearted and loyal to his people. He can be a bit obnoxious in how he repeatedly asks Tinasha to become his wife, but it’s clear that’s not coming from a bad place and if she really hated it, he would stop.

Tinasha for her part is very free-spirited and sweet. She’s stubborn and a good match for Oscar in terms of being able to shut his nonsense down when needed, but underneath her tough exterior, she’s vulnerable. Something in her past has left her distant from humanity and as the series goes on I’m looking forward to finding out what exactly that is. The way she interacts with Oscar is great fun to watch and even without admitting her feelings to him it’s clear that she’s becoming fond of the prince, maybe even close enough to one day accept his repeated proposal.

Honestly speaking, there is very little on the market like this right now, but even if there was, Unnamed Memory would be well worth reading purely on the strength of its writing. Although the book is quite long (almost 300 pages), it doesn’t outstay its welcome and the episodic nature means you can dip in and out quite comfortably. The series is a traditional fantasy story with plenty of swords, sorcery and fantastical creatures to stir the imagination.

Unnamed Memory Volume 1 comes to the West thanks to Yen Press and has been translated by Sarah Tangney. The translation reads well with no issues to mention. The series has been illustrated by chibi and I appreciate how their art captures the fantasy feel of the book without leaning into any of the usual light novel tropes. Unnamed Memory on-going in Japan at five volumes and Yen press has Volume 2 scheduled for an English release in March 2021.

Overall, Unnamed Memory Volume 1 offers a fantasy light novel series like no other. Author Kuji Furumiya takes us on an adventure with lovable characters in a world that captures the imagination and leaves you eagerly awaiting the next instalment. 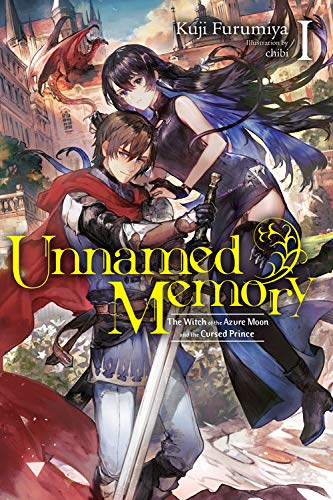 Title
Unnamed Memory Volume 1: The Witch of the Azure Moon and the Cursed Prince

Unnamed Memory follows the story of a cursed prince seeking a way to overcome it with the help of a powerful witch. Together, they’ll have many an adventure, while slowly figuring out a way to overcome the problem he faces.