Back in October, Volume 3 of Unnamed Memory brought the first half of the series to a thrilling conclusion. Now we’re back with Volume 4 to see what the second half has in store for our cast and discover if it continues to be an engrossing read.

At the end of Volume 3, Oscar is thrown back in time and meets a young Tinasha, who has yet to become a witch. One thing leads to another and Oscar realises the reason he has been sent here is to save Tinasha from the horrible incident that led to her becoming a witch. In the end, he accomplishes this, but at the cost of overwriting the future he came from and which saw the two of them get married.

So now we find ourselves remaining in this timeline where things have changed quite a bit. One big difference is that the Magic Empire of Tuldarr still exists and it’s here that we reunite with Prince Oscar, who is visiting in the hopes of finding someone who can break the curse placed upon him (a curse that will kill anyone who carries his child). Tuldarr’s current king takes Oscar under the castle where he hopes the prince will be able to find the solution to his problem.

Sleeping under the castle is Tinasha, who put herself into a magic sleep for hundreds of years in the hopes of meeting this world’s Oscar in the future (as her original self did in the first timeline). Oscar’s appearance awakens her from her slumber and she asks the prince to marry her, but naturally, Oscar has no idea who she is and refuses her advances! To make matters worse, the King of Tuldarr wishes for Tinasha to return to her rightful place on the throne, so even if Tinasha wants to marry Oscar, there are all kinds of political problems, given he’s next in line to become king of nearby Farsas.

For now, Tinasha is allowed to stay in Farsas for six months while she works on breaking the curse Oscar is under. Since she can teleport back and forth from there to Tuldarr, it means she can prepare for her coronation at the same time (even if she does want to throw it all away to remain in Farsas). Much like the very first volume of Unnamed Memory, from here the book adopts an episodic approach with our two main characters working together to solve problems in the kingdom while Tinasha is working on the curse in the background. Of course, there’s plenty of flirting and bickering between the two as Tinasha wishes to get closer to Oscar and Oscar finds himself attracted to her, despite the problems that lie ahead were he to pursue her. These differences are what prevents the ‘will they, won’t they’ of the romance from growing stale, so I’m fairly satisfied with the direction in which author Kuji Furumiya has taken them.

With enough having changed in this timeline compared to the first, it’s fair to say that this Tinasha and Oscar are very different to those we knew before. They still have the core components of their personalities, so they’re not strangers to us by any means, but it is interesting to see how they’ve changed. Tinasha, for example, is much more childlike and carefree than her original counterpart which makes sense, given she hasn’t been through the same horrific experiences. Oscar, meanwhile, is more abrasive, but it’s easy to understand why when he’s suddenly thrust in the position of having such a mysterious woman know everything about him and wishing to become his bride when he’s only just met her. We also gain some new side characters from the differing timelines, who quickly become irreplaceable members of the cast as they support Tinasha and Oscar.

This storyline proves an incredibly emotional read. Just as Oscar and Tinasha finally found happiness in the original timeline, they were ripped apart, only for fate to bring them back together in this do-over. But there is so much in their way, not least Tinasha herself who has fond memories of the original Oscar who saved her and is chasing that image of him, despite the current Oscar being right in front of her. The politics of the two kingdoms keeping them apart is yet another pain in readers’ hearts as the book goes on and the two wrestle with their feelings, knowing they shouldn’t pursue them further. I hope, as the series continues, that these two will be able to find happiness too, but only time will tell.

Unnamed Memory Volume 4 comes to the West thanks to Yen Press and continues to be translated by Sarah Tangney. The translation reads well with no issues to note. Volume 5 of the series is due for a release in June.

Overall, Unnamed Memory Volume 4 may have introduced a reset for the main couple but it still proves an emotional and engrossing read. If you’ve enjoyed the series up until this point then you’ll certainly want to know what the future has in store for Tinasha and Oscar, including whether they’ll finally be granted their happy ending. 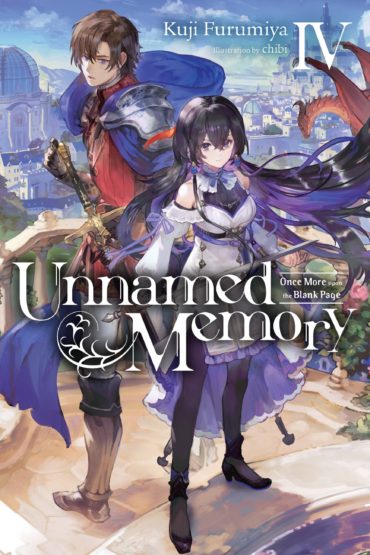 Title
Unnamed Memory Volume 4: Once More Upon the Blank Page