In the 2021 edition of This Light Novel Is Amazing! guidebook, new series Ishura made a name for itself when it topped the tankobon, novel and new title categories with the most votes recorded in its history. Since then the series has made its way to the West thanks to Yen Press and I’m here to find out if it lives up to all the hype.

The series is set in a fantasy world where the Demon King is dead and powerful fighters from a variety of races are hoping to become the next True Hero, someone who will prove themselves capable of protecting the world from harm. Fifteen candidates are embroiled in a tournament-style death game, each hoping to come out on top and kill off a few of their fellow challengers on the way.

Usually, I would write two or three paragraphs outlining the plot, especially for a Volume 1 like this, but by and large, what I said above is all there is to this one. This 400-page book is split into two halves, one which has a chapter dedicated to introducing each of the characters and giving them a backstory and one which then starts slowly bringing them together.

Each character comes from a different race, including skeletons, wyverns, dragons and, just for good measure, a couple of humans isekai’d from Japan (there are humans native to this world too, so the distinction is important). They all have unique skills and powers at their disposal, which can vary from being interesting to super-overpowered like in the case of Kia the Elf who can control anything with words.

The second half of the book revolves around a war between the city of Auretia, which is home to humans known as Mitia and the city of Lithia, which is largely home to the Wyverns and a ruler who has declared themselves the new Demon Lord. Because of where each character starts, not all fifteen are involved heavily (or at all) in this storyline which works to its benefit since at this point it’s already very difficult to keep track of who’s who.

I wish author Keiso had taken their time introducing the characters rather than giving us ten straight chapters of it. This approach makes it very difficult to stay engaged with the story because there’s no single protagonist and no familiarity to help the reader stay grounded. With the number of names and fantasy jargon thrown around, you won’t come out of this having remembered half of the important stuff that Keiso hopes you will. The series was originally a web novel and I wager the problems I’m having here with the finished product would not be an issue there where you’re reading a chapter a day/week or similar. It certainly hasn’t transitioned well.

It’s such a shame that this series gets off on the wrong foot because the second half shows that Keiso has a good idea here. Battle scenes are easy to follow and the characters are distinct enough that even in the middle of a fight it’s easy to picture who’s where and doing what. Despite the intimidating page count, it’s not that bad in terms of the word count per page, and beyond the fantasy terms, it’s not difficult vocabulary to skim through quickly. If the second half had been the starting point rather than the tedious content we get, I imagine I’d have come away from it having enjoyed it a lot more.

It’s frustrating because there’s something good here that Keiso will hopefully capitalise on, going forward. When the series won the top rankings in This Light Novel is Amazing! it already had a couple of volumes available, so it’s likely the audience was fond of it for the later instalments and not just based on this one. This at least gives me some confidence it will improve and I do own Volume 2 already, so I’m sure I’ll get to that and find out soon.

Ishura comes to the West thanks to Yen Press and has been translated by David Musto. The translation reads well with no issues to note. This release includes colour pages which are illustrated by Kureta (The Otherworlder, Exploring the Dungeon; Demon Lord 2099) and depicts some but not all of the large cast. The black-and-white illustrations throughout the book capture more of the characters and also focus on some of the action scenes but, by and large, there is a real lack of images compared to the page count which is a shame.

The series is ongoing in Japan with five volumes, while in English Yen Press has released Volume 2 already with #3 scheduled for March 21st. Although there doesn’t appear to be any scheduled beyond that, so I suspect it’ll be taking a bit of a break.

Overall, Ishura gets off to a frustrating start as there are good ideas here but I imagine most readers will be put off by reading 200 pages of introductions before they even get there. If you do stick with it, I’d be surprised if it didn’t prove a rewarding read, but that’s certainly not an easy ask for a series with books this thick. A possible avoid if you’re not that convinced by the premise. 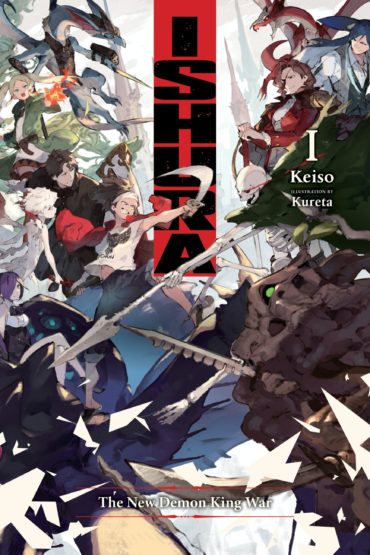