We present to you our thoughts and feelings on this one particular (and rather special) scene in Spirited Away, the train scene. For those not in the know, Spirited Away is a 2001 fantasy anime from the famed director Hayao Miyazaki. It won an Oscar in 2002 for Best Animated Film, the first anime in history to have won an Academy Award. Our writers Ben, Lewis, Martin, Paul (me) and Ryan have all contributed interpretations, but if you would like to add your own, please don’t be shy about leaving a comment below. Anyway, on with the show… 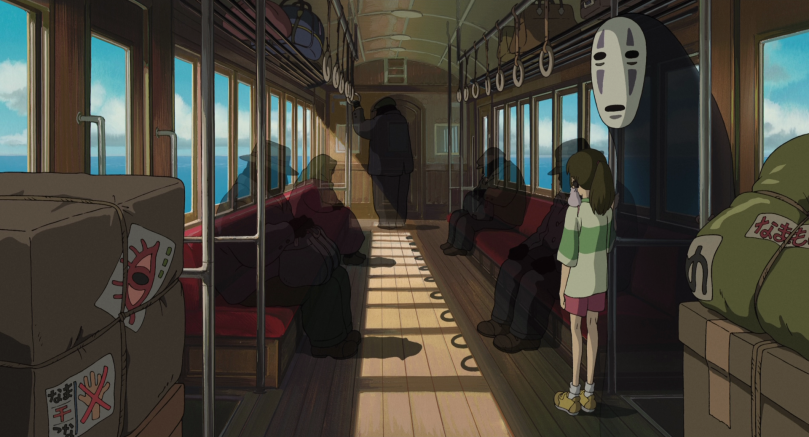 Lewis: OK, I won’t lie. I sneaked a peak at what everyone else has written about the scene. And while I agree that in general this scene is about growing up, I believe it can be looked at in a completely different way. To me, having never seen Spirited Away, this scene seems to be a very intelligent interpretation of the Japanese and their relationship with travel, particularly on trains. Let’s take the shadow figures and think of them as your typical Salary man. There is no life, no emotion, nothing memorable and, more importantly, no soul in any of these characters. Just one being, waiting to get from A to B. You are not so much a passenger on the train, as a part of the scenery itself.

This is very similar to the way the Japanese travel today. Talking loudly is frowned upon; many people just like to sit there sleeping, reading or generally lost in their thoughts. To me, this is where the main character comes in. As a child, if you asked them what a train journey should be like there would be laughter and music. However, as we grow old, we realise that what should be an enjoyable journey is just, after all, a dreary means to an end.

Towards the end when all the people have left the carriage, it shows the true characteristics of the standard Japanese commuting journey. While there were people there before, they were so isolated and emotionally disconnected from their surroundings that the journey is just as lonely now as it was at the beginning of the scene. It’s a fantastic take on the commuter travel and the shy characteristics of the Japanese themselves. 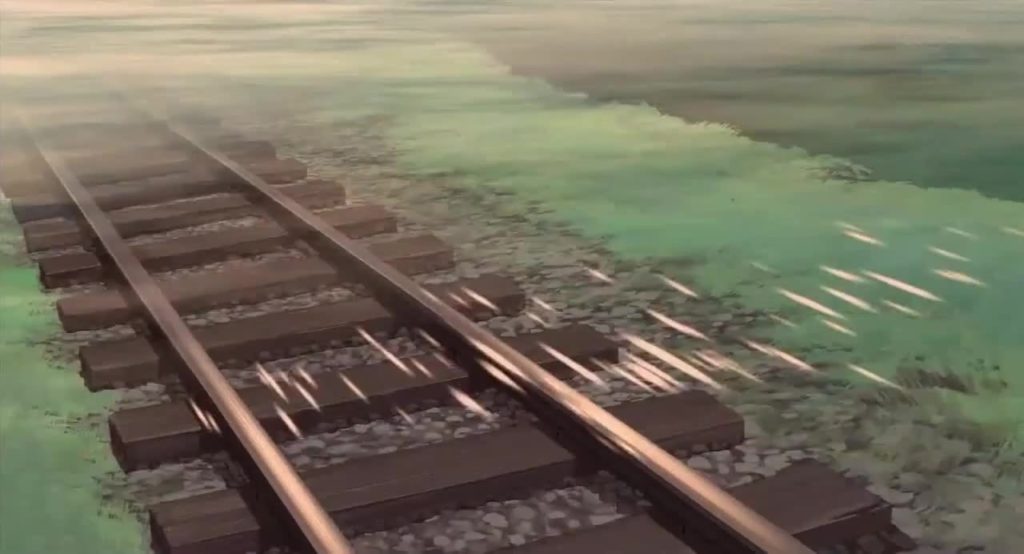 Ben: This scene is about Chihiro, who is on a transition from hedonistic and selfish child to selfless and responsible young woman. She is no longer the pig like her mother and father; rather, she is a fusion of the traditional moral values of the Japan of old with the modern day. After all, Chihiro is a woman, and she is demonstrating how they have taken a pivotal role in Japanese society. This is Miyazaki’s way of saying that EVERYBODY is responsible in society for one another and not merely oneself or one’s kind. The fact that Chihiro is responsible for those accompanying her is an indication of this.

So, the train is the catalyst by which Chihiro is escaping from an immoral world to the real one. However the train is not only the symbol of escape in this scene but also of fusion. The train runs through water and the countryside; two features of traditional life in Japan. The countryside is where traditional activities occur, e.g. farming, but also what spawned the modern world. The water provides fish, which Japan has enjoyed for many hundreds of years; however the train is not Japanese. It’s an English invention of the industrial revolution. So, the image of the train running through the water and countryside is perhaps the fusion of traditional and modern Japan.

In essence, Chihiro and the train are Miyazaki’s way of communicating the need for everyone to embark upon a transition in order to facilitate the fusion of tradition and modern and, therefore, a better Japan in terms of morality but also in regards to its history and tradition. 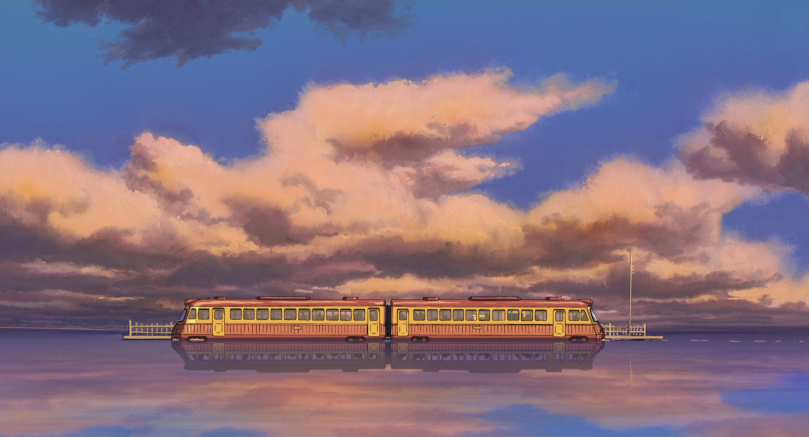 Ryan: Asked to write an interpretation of this scene, it was immediately apparent what shape my thoughts were taking. In particular, water has always struck me as a psychoanalytical symbol (for the boundary between the conscious and unconscious minds, among other things), and this dominated my interpretation of previous viewings, while guiding this one.

But the scene always reminded me of others as well; the moment where Lain confronts Professor Hodgeson in the Wired (’Serial Experiments Lain’), and the hesitant rise of Shinji to the surface of the deeply orange-hued ocean, following his reversion of the world back to it’s normal state (near the close of ‘The End of Evangelion’). Later into this sequence, the same emotionally laden, and primordially comforting, but, at the same time, unsettling, imagery; of the passing of time, and the sun setting, of evening, and life in recline; is briefly seen in ‘Spirited Away’ as well, representing the place between the conscious (day) and unconscious (night) minds – drawing on the same palette and imagery as when the dream world first began to awaken, near the beginning of the film.

Whereas in ‘The End of Evangelion’, the trauma and near-resolution of matters (if not their catharsis) concludes with the juxtaposition of the two – as the orange and red hues are strewn across the darker and equally unsettling imagery of night – Chihiro’s journey isn’t nearly as intense or revelatory. The conscious and unconscious minds, and the place that brings them together (the imagery of evening), is instead a representation of the life-cycle (reminiscent of William Blake’s ‘The Ecchoing Green’), the growing awareness of death (Haku is potentially fatally wounded), and perhaps the comforting, but equally uncertain onset of adolescent sexuality (given that Chihiro’s journey here is one for Haku’s return, who she is explicitly described as being in love with several times).

Her journey into the twilight of the mind – seen in the fall of night; her uncertainty and the unconscious – through the psycho pomp of the ticket dispenser (a ferryman into the depths of the unconscious) isn’t without remorse, but unlike the others, Chihiro’s journey is relatively innocent. The figure of lone islands, houses and shadows (recalling the native but dreamlike landscapes of Salvador Dali’s paintings) represent, at worst, her isolation, as she tries to recall Haku’s name, against the emotional scenery, and resolve her own feelings, with the water not coincidentally symbolising reflection, as Chihiro does on the train.

This is what Spirited Away is all about; Chihiro losing herself in her mind, as an escape, but eventually as a cure for her anxieties over moving to a new school and meeting new friends, surviving the trials of her unconscious mind and reflections, as she refines her character, through which she learns to remember who she is, despite not only her progression into a new environment, but also into adolescent maturity. 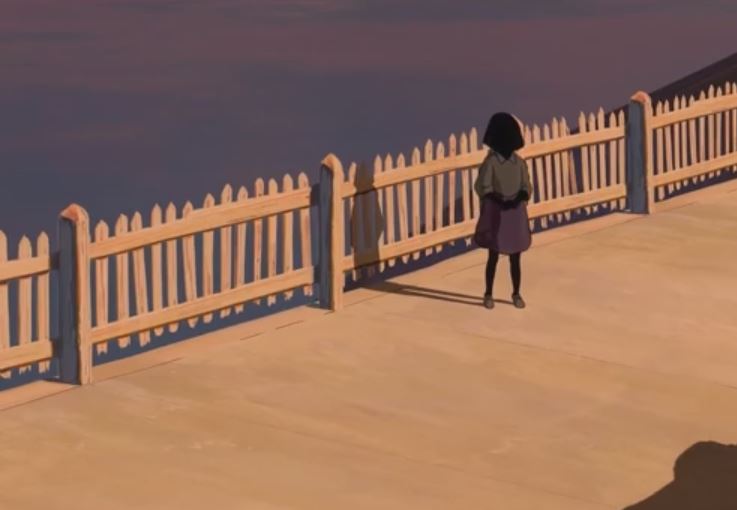 Paul: I must have watched this scene on YouTube nearly a dozen times since last weekend and often, my eyes flick on to the user comments posted below the video; one specific (and reoccurring) note caught my attention. Half way through the clip, just as Chihiro’s train is gradually pulling away from a station, the animation pans across the people leaving and waiting on the platform. Just before leaving (2:41 in the video above), we catch a glimpse of a small girl standing still, facing the train, alone. It’s just a fleeting moment, really, a matter of seconds, but it’s an emotionally striking image. Shadows are looming large over pavement and all the other passengers are moving, leaving and going home, so it’s odd that this Girl is just stuck there, waiting for something, so still, helpless and fragile. It’s a lonely image, sad, yet beautifully drawn, like a vivid, nostalgic memory, bitter-sweet.

Won’t someone ask if she is okay?

All of the people Chihiro stumbles across during her train journey are faceless, transparent silhouettes, more like ghosts. They move their bags and look out of the window into the distance. May be they don’t see The Girl because they aren’t looking for her? I suppose it’s a chilling moment because we’ve all been that Girl at some point in our lives, felt that alone in a crowd of people, isolated, just desperate to be seen.

Martin: Spirited Away is, for me at least, a story about growing up and learning to embrace the wider world rather than fear it. At the start of the movie Chihiro is afraid to move house; in this scene she is once again leaving a familiar place but this time it is by her own volition. That look of mature determination is quite literally a world away from the sulky pout she had earlier on, which highlights how she is maturing emotionally and how this affects her actions.

The train journey takes place through an alien, water-filled landscape, filled with unusual sights and sounds; reminiscent of train journeys that we’ve all taken for various reasons, but at the same time a fantastical and entertaining one. This point in Chihiro’s adventure is met with not just anxiety of the unknown but a resolve to move ahead, to explore and to look on with curiosity and wonderment at what lies around her.

The film as a whole is a portrayal of a young girl transported into an unfamiliar place and learning how to cope independently and making decisions for herself; this scene neatly sums up how she chooses her companions and the destination, but sharing her sense of childlike wonder. The film’s charm lies in the beautiful way in which the music and visuals convey these simple yet profound ideas. 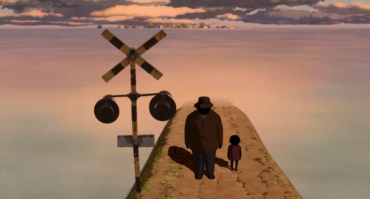 Hayao Miyazaki’s new film, The Wind Rises, is the fictionalised biography of Jiro Horikoshi, the designer of the Zero fighter planes. The film is set to premier at the Toronto International Film Festival, which takes place Sept. 5-15 and at the moment there are no confirmation of a wider release.

Film4 to premier ‘The Wind Rises’ on 7th February

To celebrate their “how manga took over the world” exhibition, Manchester’s Urbis (M60 2LA) will be hosting a string of evening screenings of anime on most weekends through out August and September (Thurs. – Sat. evenings). Screenings include a variety of different anime, ranging from the likes of Howl’s Moving Castle (Thurs 21 Aug) to … Continued