Having just reviewed the Trinity Blood series, the creativity, or lack of it, in the anime industry – something I often think about, and which my thoughts have been trying to give shape to in the back of my mind recently – seems like an appropriate subject for this article.

It struck me, when the point was made, that anime is, on first impressions, very different from what some might see as the stale, or long established, genres played out here in the West (even if, to the native audience, the same is true in reverse). Growing up, I didn’t notice it, but anime must have appealed to me, on one level, because it was different from everything else, and although I might have put it in different words at the time, the essential thrust is that it was imaginative, creative, different. Many qualities could be singled out that I liked, but it was the creativity of Japanese studios, owing at least something to Japanese culture and psychology, that made it desirable to approach.

Strictly speaking, I tend to use the word colourful, to describe characters in anime – because they’re so often eccentric, garbed in bright clothes, and wear their equally immediate personalities on their sleeves – and the word novel, to describe the kind of story frequent in anime, which is content to be fixated around a particular quirk, and nothing else (usually fantasy stories like ‘Elemental Gelade’ and ‘Trinity Blood’ conform to both of these ideas). Until recently, the former had a positive connotation, while the latter a negative, but all of this is to say that, through a consistent (but unconscious) application of aesthetics, and the idea of physiognomy, our favourite personalities in anime are imbued, even outwardly, with a lot of character, while the stories they’re in are all too frequently content with merely having one object, race or idea to set apart the fiction.

To take up these points, and analyse them, is eventually to arrive at the conclusion that the former isn’t strictly creative, besides the Japanese gift for aesthetic decor (which must have shaped the beautiful appearance of anime in general), and that the latter, even belonging to the domain of creativity, shows a lack thereof. Looking around, it’s easy to see that fantasy in general has always had this failing, a willingness to be novel, but no real compulsion to be fantasy, as opposed to another more realistic genre, for any great reason or artistic necessity, achieving little to nothing within its own chosen field. This might sound unduly harsh, but its the way I saw fantasy (which I wanted to amount to more) and large parts of the anime industry for the past few years. What then struck me, however, was first, the observation that anime is unique – in some sense, then, a creative play on Japanese culture and psychology (I had to be reminded) – and second, that this perception was enhanced by the belief that anime was niche (a topic pertinent to any discussion of fandom, and perceptions of it in particular). Anime is not without contact or influence from Western animation and culture, as anyone who knows about its history, or the influence of Disney on Osamu Tezuka will testify, but as an object of study, or as something to enjoy, it could be held largely distinct, with its own genres and conventions, which was a happy consequence of these two points.

When anime stopped being so niche, however, particularly in America, many people realised that the atmosphere surrounding it had also changed. A greater number of derivative or lesser series began to flood the market, the community wasn’t as cohesive or immediately receptive (not everyone was an otaku immersed in fandom), and even the anime itself seemed in some ways to have become mainstream. Of course, this wasn’t the revelation that Japanese studios were responding suddenly and systematically to what, by most accounts, has only been a moderately paced growth of the anime audience in the West (over and above their relationship with Western art since the end of Japan’s cultural isolationism after World War 2, leading to the ‘economic miracle’ of its unprecedented boom, and which has always had a Westernising effect). It was, in fact, a rediscovery of anime, in more studied and honest terms – the growing understanding that anime is, in many places, as derivative, and mass-produced, as any medium of entertainment, more prodigious in its home country than even most otaku appreciated.

This viewpoint affected me so much that – coupled with its constant fanservice and sexualisation (don’t worry, I’m a bigger pervert now) – I could only say of anime “I like what I like, and sometimes what I like happens to be in anime”, rather than making it clear that I was a fan, or would happily be an otaku. The word novel seemed to be an indictment of anime, a dead term which signified only how mechanical and unoriginal anime really was, like the words myth and poetry became after I looked again, and past what people say about them. But to argue that anime is somehow uncreative because there is a lot of it, which must just be Japanese psychology crawling toward revelation, but always settling for imitation, is like suggesting the lady boys of Thailand are the product of its people seeing and then curiously joining the long line into the plastic surgeons, without any prior want of a sex change.

It’s true that anime is prodigious, but this isn’t necessarily a bad thing (even if it can be characterised as variety by quantity rather than quality), because while many series do settle for imitation, there are thousands of unique anime and manga that will appeal to different people. It was also of some comfort, after watching the dozens of series which gave rise to my conception of novelty in anime, that trying to apply it to many others; Azumanga Daioh, Cowboy Bebop, Deathnote, Dragonball, Ghost in the Shell, Grave of the Fireflies, Neon Genesis Evangelion and Voices of a Distant Star, to name just a few; only ends in a strained or disingenuous likeness to its original meaning, where it is at all applicable.

There’s still an issue with creativity in anime, but unlike in the games industry, the trend toward mass-marketisation doesn’t seem to be accelerating, and in my experience, may even be reversing. It’s always worth appreciating just how strange and creative things like Dragonball, Neon Genesis, and anime in general really are however, even though they of course have their influences, and where Japanese creativity really excels, contrary to what I said earlier, is in the creation of character. Feeling now that anime is just as artistic as any industry, and happily wishing to return to the fold, I’ll summarise my feelings about creativity in the industry with a quote by T.S. Eliot, hoping you’ll look on it without too damning a mentality, and seeing that even the imitators can succeed in this sense:

“Immature poets imitate; mature poets steal; bad poets deface what they take, and good poets make it into something better, or at least something different” Philip Massinger, ‘The Sacred Wood’ (1920). 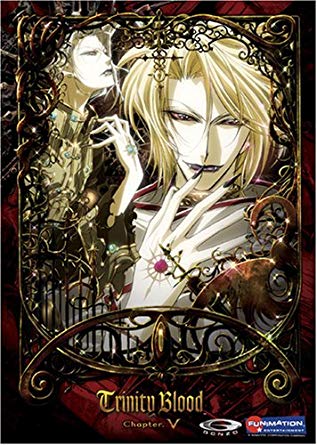 Armageddon has arrived with a wave of atomic explosion’s spreading across the earth. Five hundred years later, the world is changed forever. The Methuselah, a race of vampires are waging a war for survival against the Vatican; with the human world as their battlefield. Abel Nightroad, a travelling priest attached to the Vatican, finds himself … Continued

With the huge London Expo taking place this weekend, a trio of UK anime publishers have issued their pre-event press releases to inform fans of their schedules and in both MVM’s and Beez’s case, confirm their DVD plans for the forcoming months. Beez Entertainment reboots The World! – Beez confirm their plans to release .hack// … Continued

MVM to release Trinity Blood in the UK, beginning July ’07

According to MVM’s Anime-On-Line store, they are set to release the first volume of Trinity Blood in the UK on July 2nd 2007. Trinity Blood is a “sci-fi vampire” series from the prolific Studio GONZO. Thanks to Noratav for this news.