In a distant post-Armageddon future, earth is split into two warring factions: vampires (Methuselah) and humans (Terrans). The Vatican in Rome sends out its agents to destroy the vampires, although one among the holy warriors, Father Abel Nightroad, mild-mannered, kindly, impoverished and constantly hungry, doesn’t inspire much confidence in those who meet him. Yet, as young Sister Esther Blanchett discovers, Father Abel’s benign, bespectacled mien conceals his true identity: the priest is a Crusnik, a bio-engineered fighter of immense power, fuelled by absorbing the blood of vampires. Aided by the cyborg gun-slinging priest Father Tres Iqus, Abel travels from city to city, following the orders of Cardinal Caterina Sforza and the young Pope on behalf of AX (the special division of the Ministry of Holy Affairs). They seek to root out and destroy those who are planning to bring down the Vatican’s powers. Those plotting their downfall belong to the powerful and sinister Rozenkreuz Orden – and it soon becomes clear after a lethal attack on the Vatican that not even the members of the Pope’s own family can be trusted. 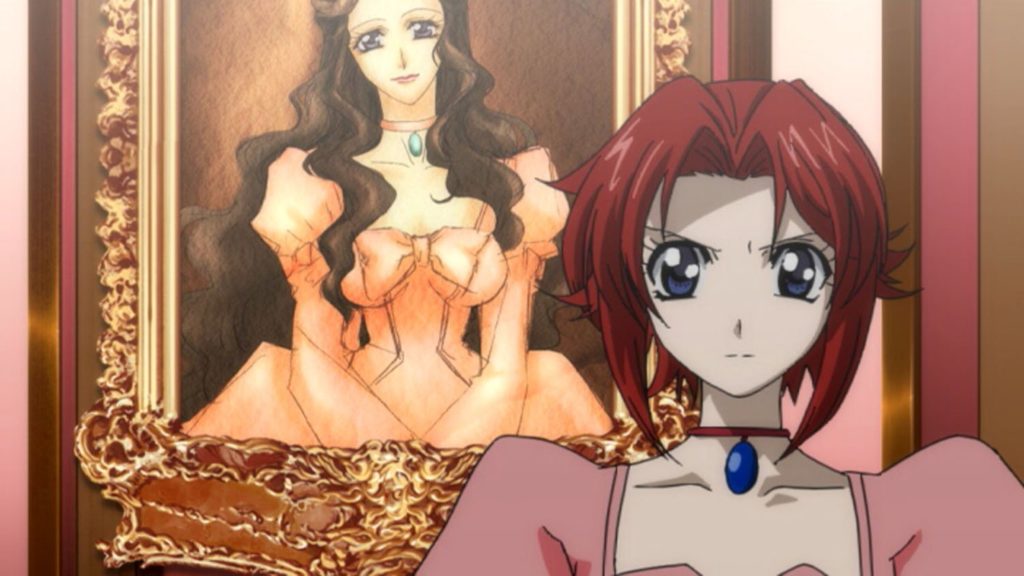 Sister Esther might be young and inexperienced but as she accompanies Abel on his missions, she’s learning fast. But when a mission takes them to the heart of the empire and a meeting with the all-powerful Empress Augusta in Byzantium, she’s out of her depth. She arrests the young lord Ion Fortuna she’s supposed to be escorting to the imperial court (true, he is a vampire) which leads to a sequence of disasters. However, there’s much more to the empress than Esther suspects – although there’s much more to Esther as well and when the Vatican sends her to Albion, she makes an astounding discovery about herself and the role she has been predestined to play. Londinium will be the stage for the final showdown between Methuselah and the Vatican. 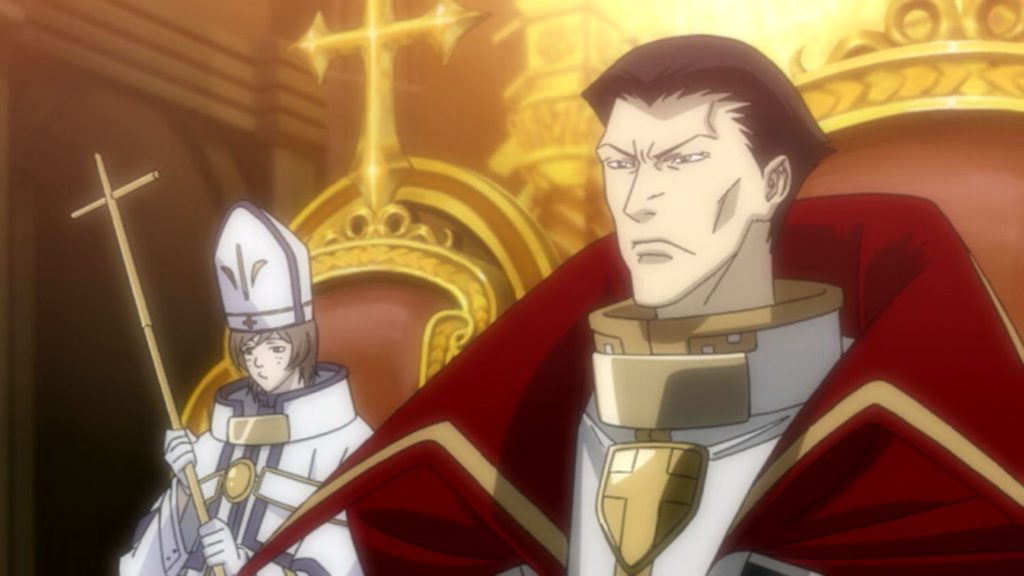 As to who’s been masterminding the vampires’ insurgency – AX are getting near to unmasking the main perpetrator and, of course, there’s also treachery simmering at the very heart of the Vatican. There’s also the mystery of Abel Nightroad’s origins as a Crusnik to be unravelled as well; it seems he was not the only one created to wield such extraordinary power and the stage is set for a duel of unimaginable proportions between Crusniks.

Trinity Blood (2005) makes its return to the UK in a new Blu-ray edition from MVM. The series is based on the SF light novels by Sunao Yoshida with striking gothic artwork by Thores Shibamoto; the novelist died tragically young. There is also a manga by Kuyo Kujou: Volumes 1-12 were published by Tokyopop and these are now available digitally from VIZ Media but sadly the later volumes were not translated into English. The 24-episode anime TV series was directed by Tomohiro Hirata (Peacemaker Kurogane) for Gonzo. The post-apocalyptic setting with vampires pitted against the forces of the Vatican is effectively realized and still looks good on Blu-ray with airships and magnificent, moody cityscapes: Rome; Barcelona; Venice; Istvan (Budapest) providing splendid baroque architectural backgrounds for some spectacular battles. The character designs are striking too: based on Thores Shibamoto’s iconic art, whether members of AX or the Rozenkreuz Orden, the women are statuesque and beautiful – and so are the men, garbed in elaborate costumes referencing the robes of the Roman Catholic church. 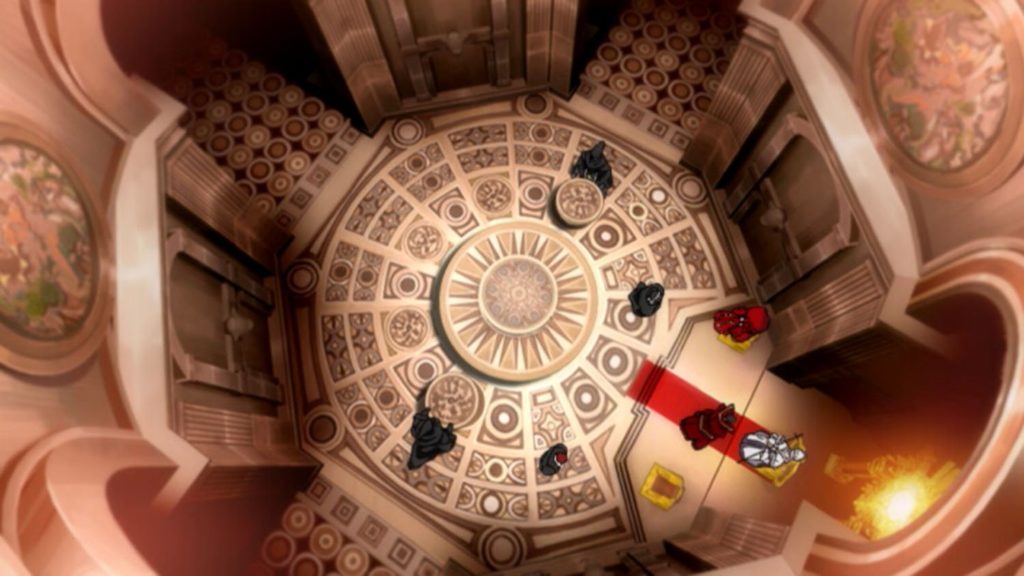 When it comes to voice acting, I favour the original Japanese cast over the US dub. This is partly because of the miscasting of the usually reliable Colleen Clinkenbeard as Sister Esther; her mezzo-soprano to contralto range isn’t right for the young heroine, coming over as too mature and too emotional and Mamiko Noto is much more convincing. However, Troy Baker expertly depicts all the varied facets of Abel Nightroad from mild-mannered bungler to terrifying Crusnik – as does Hiroki Touchi in the original, so it’ll probably depend on your preference for sub or dub in the end.

An interesting piece of Japanese casting is the pairing of the excellent Junko Minagawa as Ion Fortuna with Katsuyuki Konishi as Ion’s ‘tovarich’ Radu Barvon; in 2005, they were also playing the leads in the TV anime of Yun Kouga’s famous/infamous Loveless which never made it to R2, portraying cat-eared boy Ritsuka and Soubi. 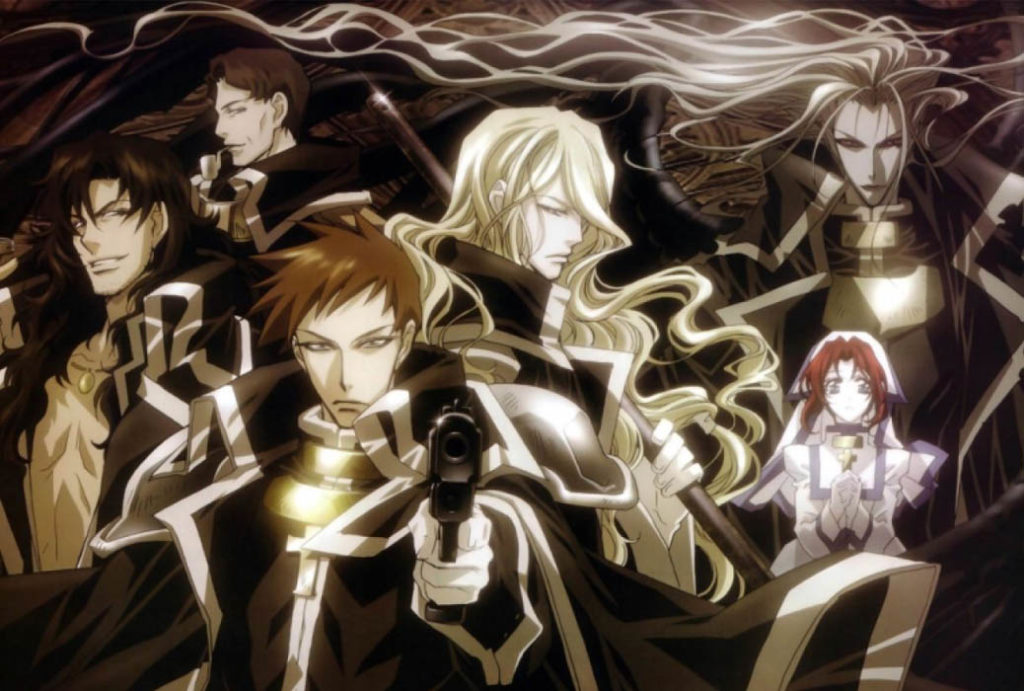 The soundtrack by Takahito Eguchi (D.N. Angel) hits all the right notes for a gothic chiller, with ominous choirs, organ and pounding orchestral underscoring. The OP is “Dress (BLOODY TRINITY MIX)” by BUCK-TICK which is suitably ominous and gothic in atmosphere. The more soulful ballad ED, “Broken Wings” by Tomoko Tane, is often quoted in the soundtrack to accompany quieter, emotional scenes. The final episode has a different instrumental ED: “TB No. 45 Resolution” by Tomoko Tane and there are two insert songs: “Let me hear” by Tomoko Tane (#17) and “Requiem~Inori” by lisa (# 23) the latter unusually resonant for UK watchers in late 2022 as it accompanies the funeral of Queen Brigitte II of Albion.

The MVM collector’s edition contains all 24 episodes over three Blu-ray discs as well as four art cards, all packaged in a rigid case. Extras include textless OP and ED and ‘Historical Artifacts’ (nuggets of information about the people, terms and places utilized in the series, including biblical references).

Plot-wise, Trinity Blood still makes for exciting viewing with well-orchestrated battles and copious amounts of blood spilt (not just by the vampires). The 3D elements (weapons, airships) are well crafted and don’t jar too much with the traditional 2D animation. The audacious mash-up of characters whose costumes, names and roles hark back to the European Baroque with vampires, cyborg warriors and airships really shouldn’t work but nevertheless, it pulls the viewer in. 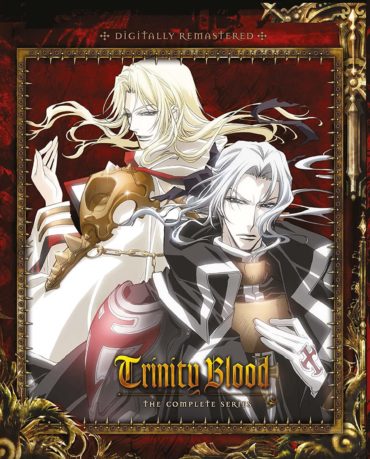 Samurai 7 retells the extremely influential Akira Kurosawa film Seven Samurai but changes the setting from Japan’s past to a weird mix of science fiction, steampunk and Japanese culture to create something entirely different – well, apart from the ‘small village hiring seven samurai to protect it from bandits’ part anyway. Does it work, though?

Does this 2004 anime series deserve more love in the year 2022? Or is it only held up by nostalgia for the rootin’ tootin’ good times? Find out in our review for the new Blu-ray release!

Armageddon has arrived with a wave of atomic explosion’s spreading across the earth. Five hundred years later, the world is changed forever. The Methuselah, a race of vampires are waging a war for survival against the Vatican; with the human world as their battlefield. Abel Nightroad, a travelling priest attached to the Vatican, finds himself … Continued