Fifteen-year-old orphan Chise Hatori is sold at a mysterious slave auction – for a cool five million pounds – to a British mage who plans to train her as his apprentice. Elias Ainsworth is very much the gentleman, smartly attired, and if weren’t for the fact that, instead of a human head he has a horned animal (dog?) skull, outwardly quite normal. But as he whisks Chise away to his house in the countryside ‘west of London, on the shores of England’, he confides that he also intends to make her his bride. For she is a rare creature, a Sleigh Beggy, one who, ‘like a queen bee’, can summon and bind all manner of fae beings. “You will be a magnificent mage one day,” he tells her. But in the meantime, Chise is just happy to have a room of her own with a real bed.

A trip to London with Elias means that he puts on his human face so as not to scare anyone. He takes Chise to meet Artificer Angelica Purley (Madam Gem Bee) who tells her about the differences between magic and alchemy, and then shows her how to start to use her gift – with rather unexpected results. Subsequent trips – three missions given to them by Simon, the pastor of the local church (obviously the church can’t be seen to be openly dealing in magic) – see Chise and Elias visiting a dragon aerie in Iceland (yes, dragons till exist) and Ulthar, a town ruled by cats. But someone is shadowing them. Is Chise in danger?

Kore Yamazaki, a relatively new mangaka, struck a chord with readers in Japan with this series which taps cleverly into the Japanese love for supernatural series set in England. Other recent fantasy manga set in England include Devils & Realist, Black Butler and The Earl and the Fairy; probably benefiting from the Harry Potter effect, which has been both a blessing… and a curse. And yet this new series is – in spite of outward similarities – refreshingly different. Besides, it’s always entertaining to us Brits to read manga set in our own country, especially when it’s tales of the supernatural.

The artwork is attractive, atmospheric and detailed (just as one would wish for in a fantasy) although the character designs sometimes call to mind the work of Hiromu Arakawa (Fullmetal Alchemist, Arslan Senki). The story is conveyed clearly, panel by panel, with no confusion as to what is a flashback and what isn’t. The depiction of a contemporary England in which mages exist is sympathetically evoked and the magical creatures (silkies, fae, ariels, vodyanoi) that Chise encounters are convincingly drawn. The only drawback – for some readers – might be that we see everything through Chise’s eyes, so we only discover what’s going on at the same time as she does (there’s little-to-no foreshadowing).

The attractive Seven Seas edition has two colour pages, a one page Afterword from the mangaka, and a four-panel Silky’s Diary and plan of Elias’s Living Room on the inside of the covers.

I have to confess that this is the first time I’ve come across the term ‘Sleigh Beggy’ – but the editorial team at Seven Seas have confirmed (on Tumblr) that it is a genuine fairy type. So, having looked it up, I find that the name originates in the Isle of Man and refers to the native ‘little people’ who are said to go about naked and have crow feet. I have to applaud Kore Yamazaki for discovering this little-known term (and I live in the British Isles!) – although a similarly obscure British goblin, the kilmoulis, makes an appearance in Devils & Realist #2.

The admirably fluent translation by Adrienne Beck makes this a smooth read, in spite of the many magical terms and explanations.

After only four chapters, it’s a little early to say where The Ancient Magus’ Bride is going to stand in the ranks of fantasy romance manga set in the present, with CLAMP’s xxxHolic and Gate 7 leading the field. However, the nascent relationship between Elias and his ‘pup’, neglected, affection-starved Chise (even though it could be seen as more than a little creepy) his courtly behaviour toward her and his insistence that she is now ‘practically family’ bode well for the future. Unless…

This is an enticing start to a series rooted in the earthy and ancient magic of the British Isles; I’m hooked – and am looking forward to reading the next volume! 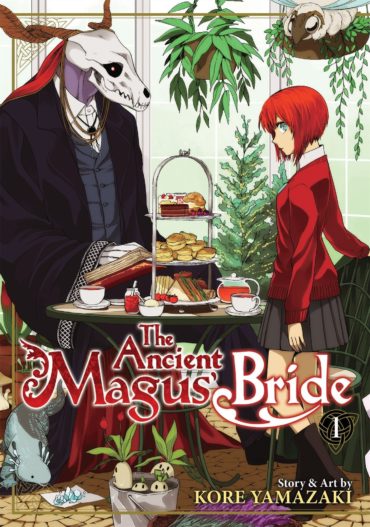 “I was an unwanted child. I was always being handed off and kicked out. But now…I’ve finally found something to cling to.” Chise, reflecting on her new life as her master and magus Elias takes her hand in his. Spoilers ahead… Chise has been called to use her powers as a Sleigh Beggy in Ulthar, … Continued

The Devil Is a Part-Timer!

“Prepare to die, Satan!” Emilia the Hero. On Ente Isla, the Hero leads the forces of good against the terrifying leader of the forces of the night, Demon King Satan, and his generals Lucifer, Alciel, Adramelech, and Malacoda. Fires and bolts of magical lightning rend the darkness; all is chaos and destruction, as Satan is … Continued