“Back then everything was so pure and simple to me, Now, ten years later, I’ve grown into a warped and jaded adult.” Ritsu Onodera

Ritsu Onodera’s life is not going well. Turning up on the first day of his new job at Marukawa Publishing, fully expecting to use his skills as an editor of literary fiction, he discovers – to his horror – that he’s been placed on the Emerald shojo manga editorial team. This is only further compounded when he is confronted by a scene of deep gloom, with his new colleagues collapsed over their untidy desks in a state of unwashed exhaustion. It seems that he’s arrived on the worst day of the monthly publishing cycle of the magazine – and the Editor-in-Chief, Takano is not only curt and unwelcoming, he has the temerity to grab Onodera to demonstrate how to kiss so a tardy female mangaka can sketch the act. Onodera, confused, shocked and humiliated, determines to stay two weeks max. And yet, stubborn at heart, he can’t resist a challenge. He determines that he will learn all that there is to be learned about shojo manga and prove his worth to Takano. (The fact that he left family firm Onodera Publishing after overhearing his colleagues calling him a ‘daddy’s boy’ is also a strong motivation.)

However, Onodera is all too aware of the irony attached to being immersed in romantic manga all day when he is still dealing with a painful and scarring rejection from high school days that has poisoned his view of love. However – after several heavy hints – it’s some while before his editor-in-chief confronts him with the accusation, “Once… you told me you were in love with me.” Takano is none other than his sempai, Masamune Saga, the object of his high school crush, and it seems that he thinks he was the one rejected and humiliated by Onodera. “I’m going to make you say you love me all over again,” Takano tells him bluntly. “So get ready.” Now Onodera is the one who is utterly confused. Has he been nursing a grudge and a broken heart for ten years over a massive misunderstanding? “Just because you work in a shojo manga department doesn’t mean you have to start thinking like a shojo heroine!” Onodera reminds himself.  Even as he’s trying to make sense of this revelation, he meets another contender for Takano’s affections: curt Yokozawa from the Sales Department. But there’s no time for romantic rivalry in the world of manga as the Emerald mangaka are late delivering their work and deadlines and sales targets have to be met! Onodera is going to have to use all his editorial skills to prove to Marukawa Publishing that he’s up to the challenges of his new editorial role.

A manga about making manga. Not the first – nor, undoubtedly, the last. (Although most series, like Bakuman, give us the point-of-view of wannabe young mangaka, rather than the editorial perspective.) And, love or hate Shungiku Nakamura’s work, there’s no denying the fact that she pulls off a deft piece of storytelling here by combining Onodera’s initiation into the stressful role of a shojo manga editor with the romantic misunderstandings and disappointments that overshadow his private life. (Life imitating art means that there is now a genuine Emerald BL manga magazine in which this popular series continues to appear. Smart move, Kadokawa Shoten!) But there’s no doubt that one of the strengths of this story is the skilful way Shungiku Nakamura weaves the working world of the manga magazine into the stressful lives of the protagonists. They say ‘write about what you know’ and she lets us see the process through the eyes of rookie Onodera with the wry comedic insights of one who has been there herself (admittedly on the receiving end of the editorial process). There are even helpful text explanations of Marukawa Publications Terminology and Jargon such as ‘Drop-Dead Date’ and ‘Radishes’ with the sly small-print note: ‘All of the terminology listed herein is specific to Marukawa Publishing and may not be applicable to the general publishing industry.’

Newcomers to Shungiku Nakimura’s work may find themselves somewhat bemused by her art. It’s rarely pretty (though it has its moments) – and it’s often pretty messy. The tsundere protagonist Ritsu Onodera is frequently portrayed in a state of excruciating embarrassment, furiously blushing, exuding sweatdrops and his wide eyes almost popping from their sockets. She’s good at spinning a compelling storyline, though, even if much of the drama is created, French farce-style, by misunderstandings and miscommunications that make you want to bang the characters’ heads together. Chapter 2.5 is particularly endearing as it goes back ten years to show the young men’s first fumbling attempts at consummating their love. (This volume has an ‘M’/18+ rating.)

It’s also worth noting that Nakamura-sensei has come in for a deal of criticism about the sexual dynamics of the main relationship in her other (also ongoing) Boy’s Love series Junjou Romantica. In that respect, The World’s Greatest First Love is a step-up in terms of story-telling and characterization (although the more recent volumes of Junjou Romantica have wandered into the same world of manga editing and publishing as well). She must be doing something right, however, because the third anime season of Junjou Romantica is due out later this year, Sekai Ichi Hatsukoi has also been turned into an anime TV series, as has her earlier (unrelated) manga Hybrid Child.

It’s been a long wait for Sekai Ichi Hatsukoi to be licensed and published in English (this tankoubon originally came out in 2008) and, once again, SuBLime manga under editor Jennifer LeBlanc’s guidance has done an excellent job. Translator Adrienne Beck gives us fluent and natural-sounding dialogue (this series is very dialogue-heavy, not that that’s a bad thing) and it’s good to have the glossy colour splash page at the beginning as well.

With a likable protagonist in Ritsu Onodera, The World’s Greatest First Love gets off to a strong start, leaving readers eager to discover what on earth could have happened ten years ago between him and his sempai to have led to such a disastrous and disillusioning break-up. 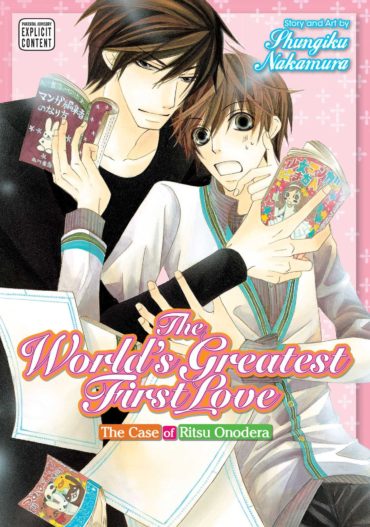 It’s tough to be the younger son of a gorgeous model turned actress and a singer/talent agency CEO, especially when your older brother Shogo is the lead singer in a world-famous rock group. And eighteen-year-old Izumi Sena has never forgotten the humiliation of being forced by his family to appear as a little girl in … Continued