It’s tough to be the younger son of a gorgeous model turned actress and a singer/talent agency CEO, especially when your older brother Shogo is the lead singer in a world-famous rock group. And eighteen-year-old Izumi Sena has never forgotten the humiliation of being forced by his family to appear as a little girl in a wedding company commercial ten years ago when the child actress cast in the role missed her flight. Rejecting the world of entertainment, Izumi’s become a true otaku, hiding behind huge spectacles and spending his time in the college manga club, vainly hoping to become a mangaka. So when a ‘ten years later’ commercial is commissioned, the wedding company wants to reunite the little page boy, Ryoma Ichijo, now a popular idol/actor, and the ‘little girl’ on screen. Bribed into appearing with promises of otaku goodies by Sena Pro manager Rei Sagara, Izumi reluctantly masquerades as a girl again, only to discover that the page boy has been harbouring a crush on him for the past ten years! What will happen if Ryoma discovers his dream girl is really a frumpy, mousy otaku? And… a guy?

Eiki Eiki (Dear Myself, Color) and artist Taishi Zaou (Princess Princess, Color) have worked together on shoujo manga as well as yaoi – but Love Stage!! is their breakout title, leading to related novel and manga BackStage!!, drama CDs and the TV anime series (available on Crunchyroll). So why has this title proved so successful?

‘There no business like showbusiness’ as the old song has it. ‘Everything about it is appealing…’ except to Izumi, born into a family of superstars, and in outright denial. Eiki Eiki and Taishi Zaou have concocted a light-hearted romantic comedy that fairly fizzes off the page. Taishi Zaou’s art won’t appeal to everyone (heads don’t always look as if they’re correctly attached to the necks) but she has a deft hand with facial expressions and in creating the chibi panels. The text and art flow together seamlessly, propelling the story along in a very readable and amusing way.

One of the most sensitive areas that BL constantly flirts with is the issue of consent (or lack of it) between partners. This is a fascinating subject from a social point of view: how the sexual dynamics of relationships are portrayed in BL – and Love Stage!! has upset some readers in this respect. It can’t be denied that Ryoma doesn’t behave well in this volume. But, on the other hand, readers who prefer their BL to be sizzling hot will bemoan the fact that, in spite of this first volume’s M rating, nothing much happens. And that’s because Love Stage!! is first and foremost a fun and fluffy comedy. On the one hand, we’re seduced into participating in the world of the talented Sena family and their entourage, as they’re chauffeured from set to set, attending glamorous launch parties, pursued by paparazzi. It’s all portrayed with a light and satirical touch – but oh, how attractive it all seems. On the other hand, it’s not difficult to feel a twinge of sympathy with poor, confused Ryoma as he shouts accusingly at the two Sena boys, “All you ‘stars’ mooching off your parents’ reputations are the same! Not a good apple in the bunch!” These young men are believably young and inexperienced in the tricky world of relationships; Ryoma’s crass reaction is not excused but it’s understandable. The trick with this series is not to take it too seriously, just to enjoy the comic moments and the skilful storytelling, the flirting with the BL trope that Izumi looks like a girl but he isn’t a girl… (that’s discussion material for another day).

The translation by Adrienne Beck for SuBLime flows along nicely in suitably contemporary style, deftly keeping the humour to the fore. Some readers have been – er – surprised by her choice of ‘adorbs’ and ‘totes adorbs’ in a couple of places, but to a UK eye, that doesn’t look too out of place, especially.

Love Stage!! makes for a fun read; with its likable characters and amusing, well-told story, it’s the BL manga equivalent of sipping a glass of sparkly prosecco and nibbling delicious macarons. 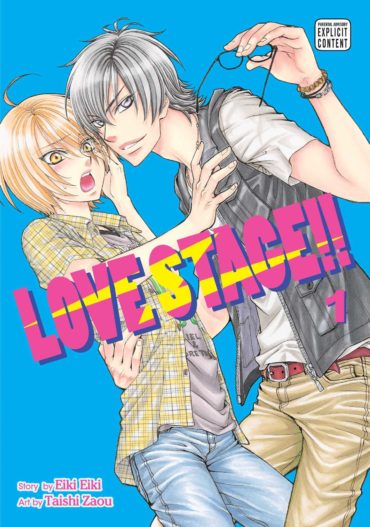