Orange is a manga series that I first came across thanks to Crunchyroll. The series was one of the first simulpubs that Crunchyroll picked up for their manga service and I instantly fell in love with Orange due to its delicate take on a complex concept. Once I’d finished reading the series I immediately decided that I wanted to own it in print. So here I am with the first part of a two volume complete collection edition of Orange from Seven Seas and I’m so happy to be revisiting it.

Our story is centered around Takamiya Naho and her group of friends: Suwa Hiroto, Chino Takako, Hagita Saku and Murasaka Azusa. On the first day of highschool Naho receives a letter in her mailbox sent from herself ten years in the future telling her that she must save Naruse Kakeru, a new student who joins the class that same day. With detailed descriptions about the days ahead and what Naho must and mustn’t do in order to hopefully keep Kakeru alive, will she be able to change the future?

The series is a heart-wrenching affair as we flip between Naho and her friends in the present day, without Kakeru, and their younger selves ten years in the past. It’s obvious that their deepest regret is letting Kakeru suffer in his depression and not being able to see it sooner. Their biggest wish is that they could have saved his life and all been together in the present day. After the events of the first few days play out just like the letter detailed, Naho of the past comes to trust that the letter’s content is true. Determined to save her classmate’s life, she attempts to stay close to Kakeru and bring him into her group of friends. Kakeru quickly develops close friendships with everyone but is scared of truly opening up and telling them his feelings. Saving him is going to be a difficult task, especially as over time the choices these characters make in the past diverge from the future enough to render the letters less helpful.

It’s worth noting at this point that the first volume of Orange The Complete Collection includes the first two and a half volumes of the original Japanese release. In this period, the science behind the letter, particularly how it travelled through time, is never fully explained. However, this is not a negative that I hold against the series at all. What really matters here is the good storytelling and interactions between characters to save Kakeru, which the series displays wonderfully.

It’s difficult to put into words just how well mangaka Ichigo Takano has done with Orange. The emotions displayed by Naho, Kakeru, and their friends are very realistic depictions of how people would react in real life with such struggles laid before them. There is a time when Naho wants to make lunch for Kakeru but she’s too shy to actually give it to him. The thoughts that run through her head are true to what you’d expect of a person in her situation and I’d have been annoyed if they weren’t. The letter might give Naho a push in the right direction but overall everything that she does, for better or worse, is of her own will. She’s a very real character and I truly respect Takano for how well Naho is written. It’s not just Naho who’s well written, of course, as the thoughts and feelings that Kakeru harbors are very true to those of someone who’s battling with depression. The artwork also reflects this emotion nicely, but more on that in a moment.

I haven’t yet touched on the other characters in this group for two reasons. One reason is that Chino, Hagita and Murasaka are present in the story but don’t have a great deal of character development overall. They’re all very well written and offer a great deal of support to Naho throughout this collection, but they’re not as prominent as Naho, Kakeru, and (later) Suwa are. So far I haven’t spoken a great deal about Suwa because much of his development comes towards the end of this part. To say too much will leave you with spoilers that I have no wish to inflict. What I will say is that Suwa has a great personality and, besides Naho, becomes the closest to Kakeru. The two are almost like brothers, and there are some great moments between Suwa, Kakeru, and Naho. Suwa and Naho are a couple in the present day (this is revealed within the first couple of chapters) but here in the past Suwa is a good sport about pushing Naho and Kakeru closer – where the two should have ended up.

Mangaka Takano has a really interesting way of drawing that I can’t help but be captivated by. For chapter titles, volume covers, and the more impactful scenes, Takano goes for a watercolour-driven approach that looks truly beautiful. The character designs are a little ordinary but also cute and well drawn when in close-up. When panels depict characters at a distance it’s clear that Takano struggles a bit, as designs are often a little rough around the edges, but this is made up for by the overall passion and love you can feel oozing from every page. This release from Seven Seas includes some wonderful colour pages at the beginning of the collection, which show off the artwork nicely.

When reading about Orange online, it appears clear that the series is Takano’s greatest work to date but the manga also went through some hard times in Japan, having been hit with a year’s hiatus and then being switched to a different magazine (in which it was only published once every other month). I was worried that it would unfairly get cancelled before we reached the end. I’m very glad that it made it through these difficult times as the series now has over a million copies in print in Japan alone, and an anime adaptation is in the works for Summer 2016. Judging by how difficult it was to get a copy of this release I’d say Orange is selling pretty well in English as well, which makes me happy to see.

Orange is a series that I would recommend on every front. It’s passionate, caring, heart-tugging and moving. The characters are likable, the story is believable, the artwork is really good, and it’s a short enough series that the Seven Seas complete collections are the perfect, affordable way to experience the manga. I’m a massive fan of Orange and I can’t wait to get my hands on the next volume of the complete collection to experience the conclusion of this story all over again. 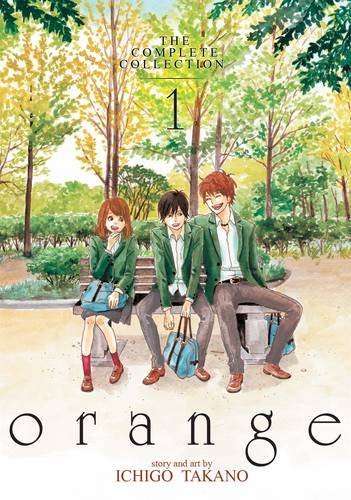