Two years ago, I reviewed the first omnibus edition of Orange from Seven Seas Entertainment. The series was already a favourite of mine and I was pleased to see it go on to earn critical acclaim for the way it dealt with depression and mental health issues. Today I’m here to review a sequel to the beloved series, Orange: Future, which showcases what happens after the events of the earlier volumes. Can it live up to the high standards of the original story?

Before we begin, if you haven’t heard of Orange before you can find my previous reviews of the two collections here and here. If you’ve read the series before then welcome back! Let’s dive into Orange: Future.

The volume begins shortly after the end of the original series, showcasing how high school life is for Naho Takamiya and friends now that Kakeru is still alive. After a chapter dedicated to this timeline, we swap to the original future, with a focus on Hiroto Suwa. As an adult in the timeline where Kakeru died, Suwa reminisces on what could have been had his friend not died and writes his letter to his past self. From here the volume begins to detail what happened to everyone after Kakeru’s death and how Suwa and Naho dealt with their grief.

Shifting Orange: Future away from Naho’s point of view is an interesting move because before now the feelings between her and Kakeru were the driving force of the story. Having said that, this narrative charge feels natural because in Orange Suwa was both Kakeru’s best friend and rival for Naho’s affection, so it’s fair to say that after Kakeru’s death, Suwa and Naho suffered the most. Suwa can’t bear to see Naho hurting and wants to be there for her; to be her support now that Kakeru isn’t there. Using ideas Kakeru gave him about what he’d do if Naho was his girlfriend, Suwa begins to try to mend Naho’s broken heart.

One thing I have always found Orange especially good at is dealing with complex emotions. Naho and Suwa have always been friends – and it goes without saying that if Kakeru hadn’t transferred into their class, the two would started dating in high school – so it’s not unnatural that the two would have feelings for one another eventually. However, Naho battles with feelings of betraying Kakeru’s memory if she were to love someone else, as he was her one true love. Likewise, Suwa sees himself as a scumbag for using Kakeru’s ideas to get closer to Naho and urges his past self not to interfere between Naho and Kakeru in an effort to ease his guilty feelings in the present day. Although the two are happy in the future, it’s clear that the effect Kakeru’s death had on them is ever present.

Going into this volume, I had been worried that Orange: Future would be nothing more than a cash-in for a series that has won so many awards in the industry, but thankfully I was completely wrong. In the afterword, mangaka Ichigo Takano writes about how she always intended to tell this story (and how it was tempting to wait 10 years to do so!), and now that I’ve read the book myself,  it does genuinely seem like a natural continuation. I never felt as though the original story was lacking in its conclusion but I won’t deny that this entry helps flesh things out too.

Where artwork is concerned, the book looks fantastic with Takano’s cute character designs and delightful watercolour backgrounds really shining. My only real complaint with the art is that crowded panels often lead to the characters looking slightly off-model, but this is a consistent issue with Takano’s work and not necessarily a new problem.

The bigger concern I have with Orange: Future is that early on the story jumps between timelines quite often and it sometimes took me a few reads to truly understand what was going on. Because there’s a lot of dialogue and not enough distinction made on the page to show who is speaking (and when), it’s easy to get lost. Thankfully this only happens a couple of times and later in the volume it stops jumping around quite so much.

This volume comes to the UK thanks to Seven Seas Entertainment. Although there are no colour pages (a shame given that the complete Orange collections had some to open with), this still feels like a quality release. Translation has been handled by Amber Tamosaitis and reads well too.

Overall, Orange: Future has proven itself to be a worthy continuation of the original series. Filled with the same attention to detail and sensitive approach to difficult topics, this volume is definitely worth your time if you’re a fan of Orange. With a 7th volume mentioned in the mangaka’s afterword it seems as though the future is bright for Orange. You could even say the future’s ‘orange’. 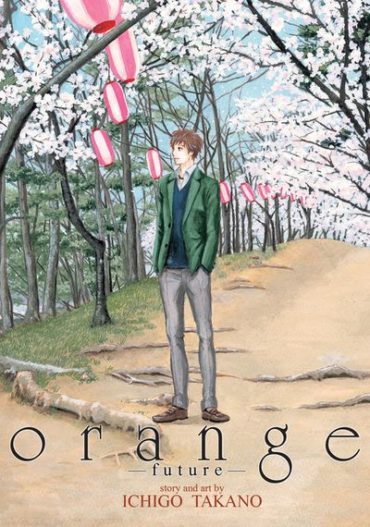