Hatsune Takanashi is a girl of simple tastes; she like curry and her friends, but her real love in life is pudding. Hatsune has begun her new life at Kikka Academy, an all-girl boarding school atop a mountain, and she is looking forward to making some new friends and eating delicious food. With a grade schooler for a Dorm Mother, a mean rival who has weaponised soy beans, and a foreign exchange student who doesn’t fully understand how clothes work, her new high school life is guaranteed to be interesting to say the least!

Paradise Residence is one of the latest manga series from author Kosuke Fujishima, the man behind Oh! My Goddess and You’re Under Arrest!, and it’s a fairly enjoyable slice of life comedy, even if it does come across as a little bit forgettable.

Standing out from the crowd is something that I feel is very important in anime and manga, and in the slice of life genre in particular. It’s so easy for a slice of life anime and manga to become just another generic high school comedy, and become instantly forgettable. The best way to make a slice of life show memorable, of course, is to have a memorable cast of characters. The standout example of this has to be the classic Azumanga Daioh, a run of the mill manga on paper, but elevated by a fantastic cast of memorable – not to mention hilarious – characters.

While this is the best way to go about making your series stand out, you could also resort to to using a unique gimmick to pull in readers. Of course, this is less effective; the characters can make or break a series. However, it at least provides something original and fresh. This is where my biggest issue with Paradise Residence comes in; it doesn’t really do either.

Paradise Residence is probably the very definition of a generic slice of life manga and there honestly isn’t really a whole lot to say about it. Whilst there isn’t really a whole lot of story here, as you’d probably expect from a manga like this, it hits familiar story beats and doesn’t really offer anything original or interesting to people who are already familiar with the genre. Of course, that doesn’t mean that it isn’t enjoyable. Despite its shortcomings, I managed to get quite a few laughs out of Paradise Residence, mostly due to its cast of characters. Again, I really don’t find them particularly memorable, and they don’t exactly get any kind of depth or development, however they’re the source of most of the laughs that I had throughout these first two volumes. The protagonist, Hatsune, makes for a decent enough lead, although I do feel that some aspects of her character do come across as a bit forced, like the whole pudding obsession. If I did have to pick a favourite character, it would have to be Stephanie, the English foreign exchange student. Whilst her gag of not really understanding clothes can come across as an excuse for some fan service at points, I’d be lying if I said it didn’t get some good laughs out of me.

Fujishima’s artwork in Paradise Residence is fairly nice but nothing really amazing, serving the story well but not pushing the envelope. The character designs are somewhat unique looking, being quite different from Fujishima’s previous popular works such as Oh! My Goddess and You’re Under Arrest!; here the designs look more contemporary than his other series, which were more rooted in the conventions of the 90s. There is a decent amount of panel variety and it all flows well, with it never being hard to tell which character is speaking.

Something worth noting is that as well as coming with the first volume of Paradise Residence, Volume 1 also includes Paradise Residence Zero, a prequel manga that leads into the main series. Although it’s at the back of the book it’s probably worth reading first, seeing as the main manga references some events of the prequel. Also included in Volume 1 is a short story written by Kanan Norihara and seven pages of coloured artwork.

Whilst it doesn’t really bring anything new to the table, the first two volumes of Paradise Residence still make for quite an enjoyable read, providing a few laughs throughout. 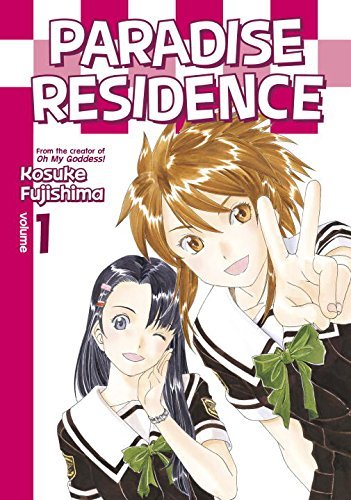