The Fairy Tail manga has long been one of my favourite shonen series. Like with all long running manga though, I always get left feeling that there are more stories to be told in the universe than just the ‘main’ story we read week to week. Thankfully the Fairy Tail Zero manga is here to help fill one such gap.

A certain story that I’d always longed to be told from the Fairy Tail universe was the origin of the Fairy Tail guild itself. We already knew that the first guild master was Mavis Vermillion, but just how did the creation of Fairy Tail come about? With this volume of manga we’re given all of the answers we could hope for and a few pleasant surprises.

Our story begins on Sirius Island (translated as Tenrou Island in the anime) where Mavis, as a child, lived with her parents. After her parents passed away she ended up working for the Red Lizard wizards guild and it’s during this time period that we’re dropped into Mavis’s life. One day the town is attacked by a rival guild known as Blue Skull and Mavis and Red Lizard’s guild master’s daughter, Zera, are the only survivors.

Flash forward seven years and we’re reacquainted with Mavis and Zera as some treasure hunters come to the island. The group of treasure hunters is made up of Yuri Dreyar (father of Makarov Dreyar), Precht Gaebolg, and Warrod Sequen (one of the ten wizard saints in the future) and to any avid readers of Fairy Tail will be familiar faces. The three have come to take the mysterious Sirius Orb, which is said to be worth a great deal of money. However, after meeting Mavis and striking a deal with her for the orb, they discover that it has actually already been stolen! Mavis determines that it was likely taken by Blue Skull during the attack seven years ago and thus the treasure hunters, along with Mavis and Zera, set out to find the guild in question and take back what belonged to Sirius Island.

As this is a single volume I won’t say too much more regarding how the story comes together because I don’t want to spoil anything, but I do want to mention that Zeref has some level of involvement within the plot. Not only does Fairy Tail Zero tell the Fairy Tail guild’s origin tale, it  also shares the story of how Mavis and Zeref became friends. In fact this manga strives to wrap up a few different storylines in one volume and I’m happy to say that it does what it sets out to accomplish rather well.

While we’ve seen a decent amount of Precht and Warrod in the main Fairy Tail manga it’s nice to see a bit more of them when they were younger. The same can be said for Mavis, too, because while we’re fairly familiar with her now, it’s nice to see her humble beginnings and experience the adventure that left her wanting to create a guild: a place to come home to. As far as new characters go, Zera and Yuri are both great additions to the Fairy Tail cast and it’s easy to see that Yuri and grandson Laxus have a lot in common – including their usage of electric magic! Zera is mysterious and very quiet but she’s also much more grounded and down to earth than Mavis, so the two make for a good team.

Fairy Tail Zero has been handled by mangaka Hiro Mashima, who many will already be familiar with as he’s also the mangaka behind Fairy Tail itself. Due to being created by the original mangaka, it leaves Fairy Tail Zero with the ability to slot into the canon perfectly while also working as a standalone story. Mashima penned the 13 chapter story around the same time as the end of the main series’ Tartaros arc (the arc spans chapters 356 to 417 of the manga, which is roughly volumes 42 until 49) and in the back of this volume Mashima notes how more of Mavis’s story is told in volume 53 of the series.

Despite the fact that this story can stand on its own fairly well for readers without a deep knowledge of Fairy Tail, I think you’ll get more enjoyment out of Fairy Tail Zero if you can read it within the timeline that I’ve listed above. As it is the origin story of the guild, it obviously delivers a greater impact the more you know about the series, but I also feel that it’s quite emotional and enjoyable all on its own.

As far as artwork is concerned, I think that Fairy Tail Zero is a really good example of Mashima at his best. The action scenes aren’t quite as impressive as in the main series but the battles still flow very well. What stands out the most though is the emotion that all of our cast display and how this shines through in every panel. Mashima is a strong artist and pays a lot of attention to the small details, even in the smaller panels that are home to a single character. It’s that attention to detail that brings his world to life and makes even a somewhat barren scene looking over a small lake seem pretty special. In the back of this volume there is also an interview with the mangaka, which really shows us just how much thought and effort goes into making Fairy Tail what it is. For a big fan like me it was brilliant fun to read through!

Overall Fairy Tail Zero is a great addition to the Fairy Tail universe. Not only does it expand on some much loved characters’ stories, how the guild came to be and so on, it also gives us time away from our usual cast of heroes and leaves us with something I can proudly recommend to shonen fans. Existing fans of the series will get more out of it but I think there’s a story here for everyone and as a single volume it’s well worth your time. 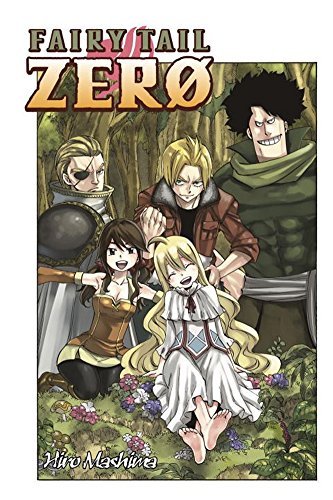