In an alternate reality Earth, humans cannot be killed. Even if they are shot in head or stabbed in the heart, they will instantly revive in perfect health. However, a disease is spreading, RDS, or  Resurrection Deficiency Syndrome, that prevents humans from coming back when killed. After his sister dies as a result of RDS, Kenzaki Shinichi is put in charge of the Anti-Vector Task Force, a special group of investigators who hunt Vectors, humans who carry the fatal disease. Opposing the task force is a mysterious organisation who protect the Vectors at all costs, with people known as Escape Artists rescuing and protecting the Vectors. Despite this, Kenzaki is determined to put a stop to RDS once and for all and discover the secrets behind the shadowy organisation that opposes his team.

If you’re looking for a manga series with buckets of blood and gore, you can’t go wrong with Ryo Yasohachi’s seinen action splatterfest Immortal Hounds. The idea behind Immortal Hounds – that everyone can instantly come back to life in an instant – is genuinely quite genius for a manga all about trying to be as violent and gory as possible, and it takes great advantage of its concept. Kenzaki and his team of investigators are killed and mutilated in a bunch of different and increasingly violent ways throughout the first volume and the sheer amount and intensity of the action here is incredibly over-the-top and very enjoyable, if you can stomach that kind of thing.

Whilst Immortal Hounds’ insane violence is certainly the element of this first volume that I enjoyed the most, the story is more than just an excuse for mindless violence and is an intriguing start to a larger story. The premise alone was engaging enough to keep me invested but these initial chapters set up plenty of plot threads that left me wanting to know what happens next. Despite the story being quite straight-faced and taking itself pretty seriously, I’d be remiss if I didn’t mention the comedic in-universe public service announcements that pop up in-between some of the chapters. Not only are these shorts darkly hilarious, poking fun at real life PSAs, they also help to flesh out the universe by having the characters explain how RDS works and how people with the disease are treated. This makes the universe feel much more believable whilst also delivering some surprisingly good laughs.

When it comes to the characters, there isn’t really much to talk about, at least in this first volume. We do find out a little bit about Kenzaki and Rin, but there isn’t really a whole lot to them at the moment, although the ending of Volume One certainly leaves them in a good place for future development.

Considering artist and author Ryo Yasohachi has never done an action manga before, with his only other notable work being the sci-fi/romance Uwagaki, Immortal Hounds is actually quite the impressive looking manga. It’s nothing particularly unique, but the action and gore look great. If I did have one complaint, it’s that I found it occasionally hard to follow in the more hectic scenes, but it was never really a huge issue.

With delightful amounts of over-the-top gore and violence and an interesting premise, the first volume of Immortal Hounds provides a promising start to what could be a great splatter series. 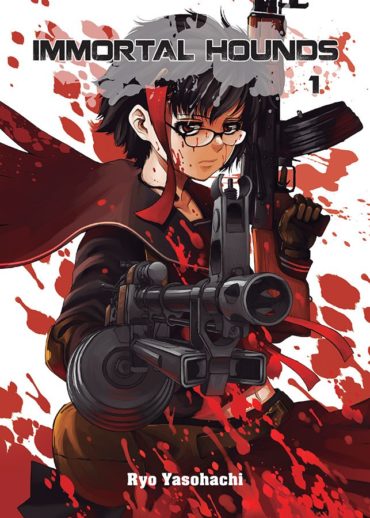 Leiji Matsumoto is one of those names that you hear all the time when you start getting into anime and manga, often in sentences that start with “classic authors like…” His most famous works include Space Battleship Yamato, Galaxy Express 999 and Space Pirate Captain Harlock, and Queen Emeraldas is certainly a lot closer to … Continued