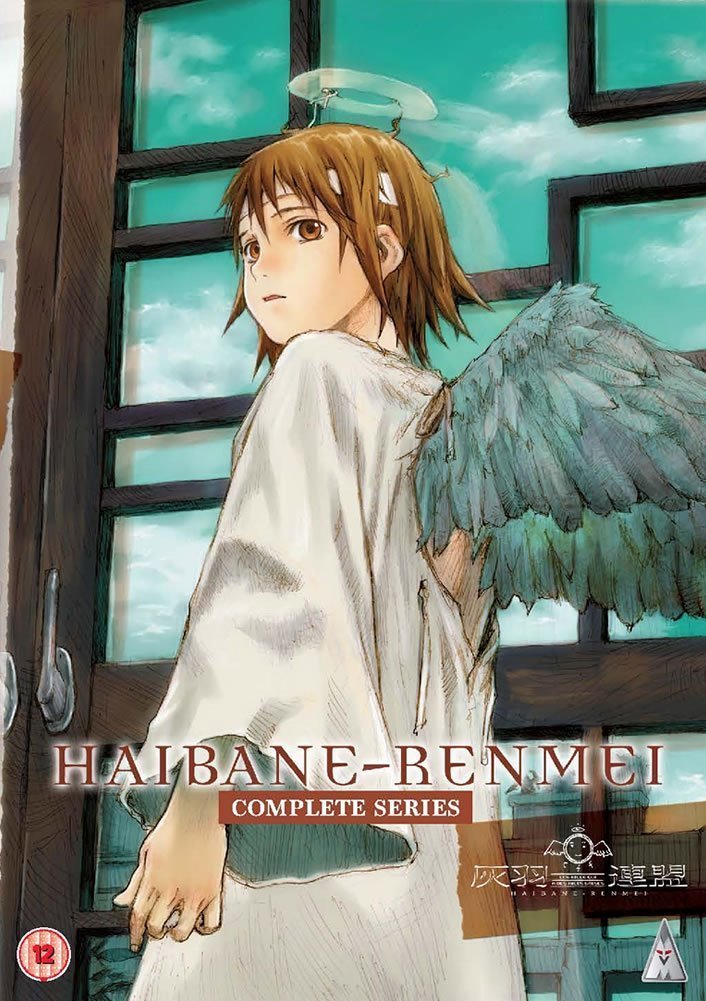 Fantasy series Haibane Renmei (Charcoal Feather Federation) is one of the few anime series to be adapted from a dojinshi (fan work) manga. In fact, the anime superseded the original strip which was never completed.

The anime follows a group of beings called “Haibane”, angel-like people with small feathered wings who have halos made for them. We meet the main character while she is having a dream about falling from the sky. She then wakes up inside a giant cocoon, which she breaks and frees herself from. As it is custom for Haibane to be named after the events that occur in the dream before they hatch, this Haibane is named Rakka, meaning “Fallen”.

Rakka is welcomed by more Haibane, who live in the abandoned “Old Home” school inside the walled city of Glie. These other Haibane are Reki, an artist who also acts as a teacher to child Haibane; Hikari, who works as a baker; the mechanically-minded Kana; librarian Nemu who is the oldest of the group; and Kuu, an outgoing Haibane who is the youngest of the central gang.

Rakka then learns more about the area around her and about her species: the Haibane have no idea as to who or what created them; they are forbidden to leave Glie, or even to touch the city walls; all of their clothes are second-hand; they have no money so transactions are made using special notebooks that are given to them by someone called “The Communicator”, a masked individual who is the only one who can talk to the Toga, the only group who enter and leave Glie, and even then they only communicate via sign language. Although the Haibane are a different species, the humans of Glie treat them well.

At first, Rakka gets to know more about her friends, working alongside them in different jobs and learning more about the environment around her, but things change when one of their group disappears. Rakka learns that Haibane can leave the world by taking the “Day of Flight”, when they have overcome the various trials their time in Glie has put them through and can leave the city skywards, never to return.

This is normally the fate of all the Haibane, but Rakka comes to learn that one of her main group cannot do this. There are some Haibane who have no memory of their dream inside the cocoon, and thus are born with black feathers on their wings, a sign that they are “Sin-bound”. This particular Haibane needs to remember their dream; otherwise it is impossible for them to have the Day of Flight. Rakka also discovers that some of her feathers are turning black. Could it be that she too is somehow Sin-bound?

The main appeal of Haibane Renmei is that it clearly stands out against most of the anime releases we tend to get in the UK. This is a rather slow-moving and for the most-part genteel drama. The music alone is enough to suggest that, with the opening theme being a quiet instrumental piece. That is not to say that it is dull. There is still a fair bit of excitement in some scenes. There is the moment when Rakka’s wings hatch, which is a pretty grisly sight. There is also a big sequence in which Rakka falls down a well and injures herself. She is later saved by the Communicator, but also later gets into more trouble. You might find yourself wandering off at the odd occasion that might be a bit too slow, but overall the pacing is fine.

You will also find plenty of stuff to keep you entertaining on the DVDs as there are plenty of extras. These include textless opening and closing, trailers, commercials, various art galleries, a special version of the ending and an interview with the creators of the show.

In terms of a downside, it would be that because the original story was left unfinished we have no idea of what the true end is. However, the original creator, Yoshitoshi Abe, deliberately has elements of the story that were meant to be left for the viewer to interpret themselves. What was the exact meaning of Rakka’s falling dream, for example?

If you are getting a bit worn out by the usual anime releases you see, Haibane Renmei might make for a nice change of tone for you.