Ren is a nine-year-old boy who has run away from home; his mother has just passed away and his father has been out of the picture for a long while. Though his relatives offer to take him in, he chooses to fend for himself on the streets, until he crosses paths with a creature named Kumatetsu, a grumpy anthropomorphic bear carrying a giant sword. Ren is then whisked into a new world parallel to that of the humans, home to the beasts who are currently expecting their Lord to ascend and reincarnate into a God of his choosing, so a warrior beast must take the Lord’s place in ruling them. Kumatetsu happens to be in the running to take over but his opponent is Iozen: a giant boar favoured amongst the beasts for his kind heart and family values. Kumatetsu decides on a whim to rename the boy as Kyuta and make him his new apprentice, despite the beast world worrying over allowing humans into their world, due to the darkness that could potentially grow inside them.

The Boy and The Beast is the latest film from Mamoru Hosoda, the director of The Girl Who Leapt Through Time and Wolf Children. Mamoru Hosoda’s films often have a simple story concept, but are backed by deeper emotional roots and large-scale worlds to fit them in, and The Boy and The Beast is no different from the others in this respect. A young human child finding themselves, in more ways than one, in a magical world very different from their own is a theme in many classic kids’ films from The Labyrinth to Peter Pan. The Boy and The Beast starts off very similarly to those in the same genre, with the first act set primarily in the beast world with Kyuta and Kumatetsu learning to live (or more accurately, put up) with each other. The introduction to the world of beasts is kept brief and mostly sold via its visual design rather than exposition; the beast world seems to take inspiration from eastern African cultures such as Egypt, with stone buildings, simplistic markets and minimal furnishings. Despite the wide variety of animals on display, they look and act very much like humans. 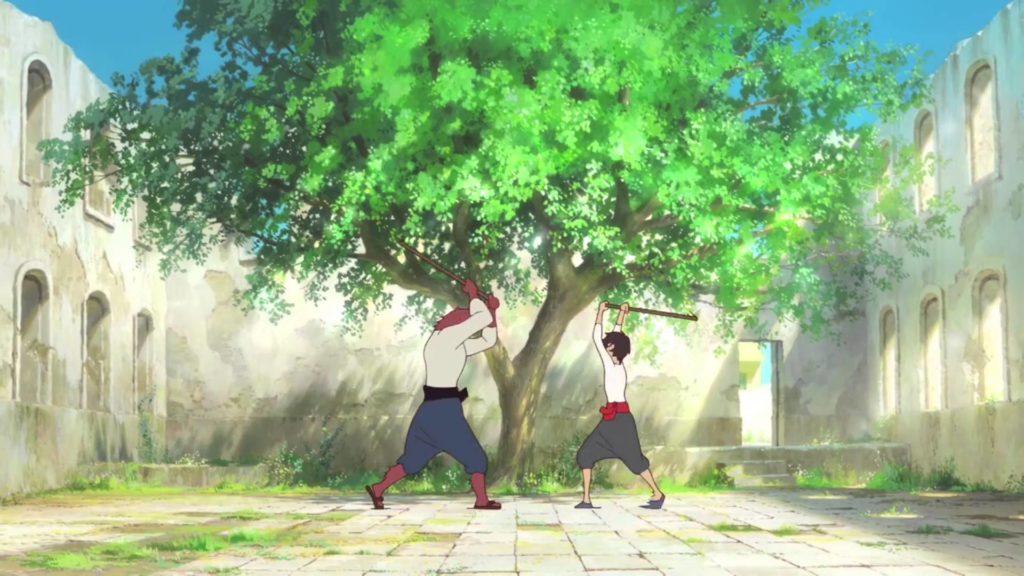 But it won’t be the lore of the beast world that’ll keep you glued to the screen, but the two main males who steal all the attention. The humour in the film is strongest within this first arc as the pair constantly bicker and chase each other around the house. Both are hot-headed in nature and, being typical boys, don’t like to discuss things in depth so the pair constantly clash, and seeing a tiny boy manage to outrun a giant bear creates many visually entertaining scenarios. The father and son parallels are easy to spot as well, so parents will probably be seeing their own family at its wackiest shining through the pair. Then there’s the extended family in the monkey Tatara and pig monk Kyakushuubou who provide observational commentary as the fights progress; they travel to discover the meaning of ‘strength’ but learn little to nothing as they’d rather try to one-up each other.

A whole film could have been taken up with the travelling side-plot that the first arc embarks upon, but then we get the second act which develops the premise to a deeper level. Most films that have a child enter a magical world often have them leave it not long after, having grown up mentally rather than physically. But The Boy and The Beast takes the next most logical yet brilliant step of actually having Kyuta grow up in the beast world; not just by a few days or weeks, but by eight years. Now a seventeen-year-old young man, a fighting machine and becoming very much like the beast he’s grown up with, he eventually stumbles across the route back to his world. And it’s here that the fantasy elements start to melt away into the emotional core of Kyuta/Ren, his struggle to maintain inner strength and find a place he belongs. Humour is stripped back here but Kyuta/Ren’s interaction with the human world is a compelling watch, especially when he’s with with Kaede, a girl he meets and eventually learns from. Kaede sticks out like a sore thumb half the time, being the only female in the cast with more than five lines, but she and Ren have genuine chemistry and their tender relationship helps Ren learn to channel his anger in a progressive way, and find his moral compass. Ren’s battle with his inner demons will hit many audiences’ hearts, even if the natural human nature of the second act almost – dangerously – lets the audience forget about the beast world that came before.

But then the third and final arc comes charging in. Admittedly it is this part that could have done with the most editing to help shorten the long duration of the film but it also does a great job of wrapping up all the plot points. The Lord has chosen which God he wants to be reincarnated as (which I won’t spoil, because it’s hilarious) and the two warriors must face each other. But now surrogate father Kumatetsu has changed from Kyuta’s influence, and in the background many of Iozen’s previously unbreakable walls have started to crumble. As Ren’s and Kumatetsu’s arcs have different end goals, the film proceeds to give mini-endings for both, before wrapping them up in one big fight and emotionally thrilling conclusion. The wrapping up of Kyuta/Ren’s character arc largely relies on his reflection upon the mysterious character Ichirouhiko. It’s telling how Ren’s unorthodox upbringing has helped to shape a solid young man, whilst Ichirouhiko’s more traditional family instead has brought out something very different. It’s the message the two come together for that fantastically ties up with Kumatetsu’s constant struggle with finding his own place in the world he feels that he didn’t quite fit in. The finale could have been backed up with additional scenes between Ichirouhiko and Ren to give more of an emotional punch, but that’s nitpicking; we’ve followed Ren’s captivating journey thus far and it’ll tug on the heart strings nevertheless. 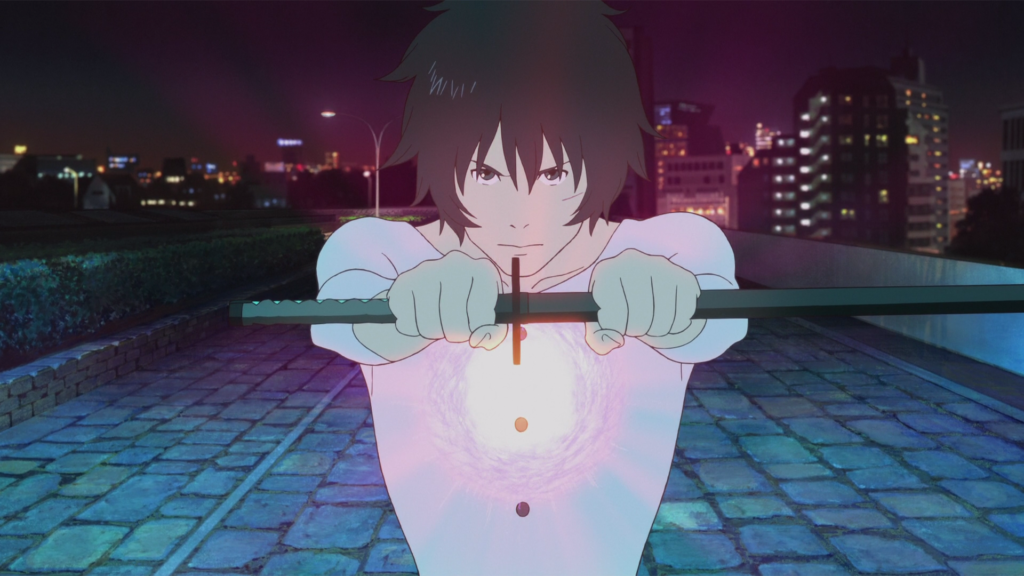 Animation for Mamoru Hosoda films is consistent in quality but keeps the same visual style, something The Boy and The Beast doesn’t stray from, but major props go to the animation of Ren. His character design is largely plain with brown hair and a small face, but it’s the detailed animation of his facial expressions that really works in building the audience’s attachment to the character, from the sulking faces he makes as a child to the look of determination and support for those he cares about as an adult. Takagi Masakatsu’s soundtrack blends in nicely with the uplifting and adventurous nature of the movie, with a rocky ending theme song provided by Mr Children that perfectly bookmarks the journey.

A quick word of warning to parents; despite it being labelled as a ‘family’ screening at the BFI, the translation sure had a fair number of ‘shit!’s in the subtitles. Hopefully they’ll clear that up when it comes round to the English dubbing.

The Boy and The Beast is as visually splendid as Summer Wars and as heart-warming as The Girl Who Leapt Through Time. It’s a highly recommended film for the whole family, full of laughs, tears and smiles. If it comes to a cinema near you, don’t miss it.

The Boy and The Beast has been licensed by Studio Canal, with a UK retail release on 4th September 2017. 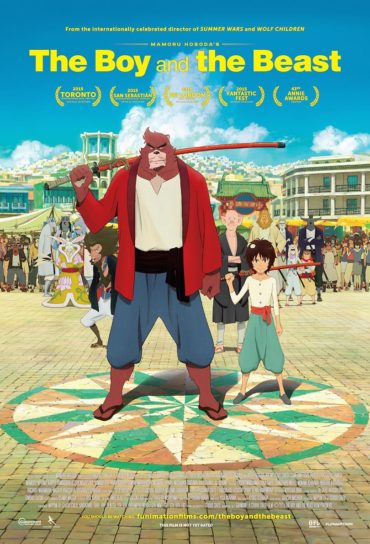 Title
The Boy and The Beast