Over the past few weeks it was discovered that the new film from director Makoto Shinkai will be screened at a number of theaters throughout the United Kingdom. No one knew who it was that was offering this but today some special news has appeared.

In addition the distributor Anime Limited have acquired the theatrical rights to the film, and was responsible for providing the cinema screenings across the country. The film will be screened across numerous cinemas nationwide on 24th November, making the UK one of the first countries outside Japan to release the film in theaters. We’ll have the full list of cinemas screening the film below.

The BFI London Film Festival dates that the film will be screening at are:

The tickets for all three cinema screenings will be made available on 15th September at 10am via the BFI London’s official website.

Your Name is the story of a teenage boy and girl who have
never met, but who start to magically swap minds and live
each other’s lives. Mitsuha, a teenage girl student, lives in a
small mountain town, but longs for the bright lights of Tokyo far away. Then she is astonished to wake one morning in the body of Taki, a teenage Tokyo schoolboy – who in turn wakes up in Mitsuha’s body!

Switching back and forth between two lives, locations and
genders, Mitsuha and Taki must cope with their fantastic
shared situation. At first they are outraged and mortified by
what’s happening, but soon they start enjoying their double
lives, though they never meet directly. Eventually, though,
one of the youngsters will learn the devastating truth behind what’s happening…

Your Name. was first screened at Anime Expo 2016 in North America back in July followed by Japan’s first theatrical release in August. Your Name. has also topped the Japanese box office charts, earning 1,277,960,000 Yen (about £932,000) in three days since opening plus selling over 688,000 tickets. The film’s original novel has also topped the sales as well as the original soundtrack from Japanese rock band RADWIMPS on the Oricon weekly album chart.

Makoto Shinkai is known for his directorial works on Voices of a Distant Star, The Place Promised in Our Early Days, 5 Centimeters per Second, Children Who Chase Lost Voices (released in the UK as Journey to Agartha) and The Garden of Words in addition to a number of short films including She and Her Cat and Cross Road. The director was also involved with the popular ef ~ A Fairy Tale of the Two franchise.

Anime Limited will soon be releasing the director’s first two films (Voices of a Distant Star and The Place Promised in Our Early Days) on Blu-ray later this year, and have already released his previous instalment The Garden of Words on Blu-ray also. Manga Entertainment have released 5 Centimeters per Second on DVD and Kaze UK have released Journey to Agartha on Blu-ray.

The cinemas that Your Name. will be made available on 24th November are as follows: 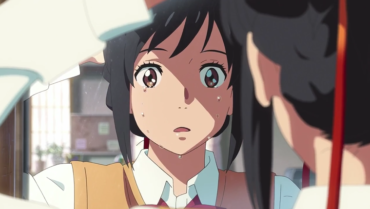