High school life, they say, is rosy. And rosy, they say, is high school life. High school life is always treated as being rosy, so much so, that being told as much is commonplace. And yet, I don’t think that all high-schoolers want it to be rosy. Take studying, and sports, and romantic affairs – there are people who show no interest in any of them, aren’t there? There are students who prefer things “gray,” as it were, aren’t there? Well, I guess that might be a pretty empty life, though. – Hotaro Oreki, Hyouka Episode 1

If you were to ask me which of Kyoto Animation’s many slice-of-life adaptations I like the most, my answer would most certainly be Hyouka. This novel adaption aired in Japan in 2012 and despite no legal way for fans in the west to watch the show, it somehow gained a cult following regardless. Fast forward to today and Anime Limited have finally brought the first part of the show to the west. With that in mind, I’m here to tell you why this anime is worth your time. 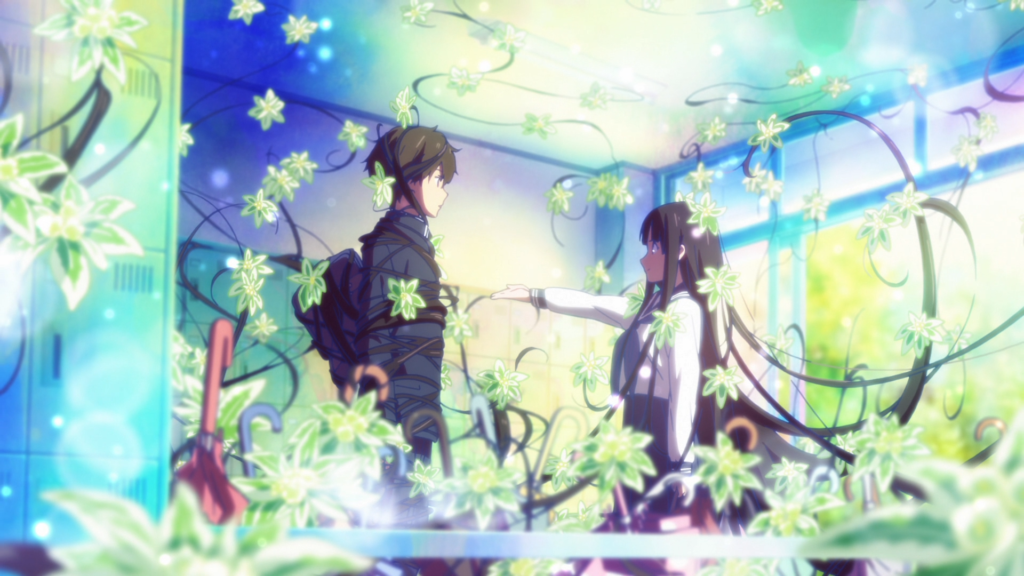 The story of Hyouka follows Hotaro Oreki, whose motto in life is that ‘If I don’t have to do something, I won’t, but if I have to, I’ll do it quickly’. Hotaro only wishes to live out his high school days peacefully. However, when his older sister orders him to join the school’s Classic Literature Club – on account of the fact she used to be in the club and it’s in danger of being shut down due to lack of members – he encounters Eru Chitanda, the girl who’s going to bring Hotaro’s monotone days to an end…

Eru Chitanda is an inquisitive girl who has joined the Classic Literature Club in an effort to figure out the mystery behind something her uncle once told her about his time at the school. It just so happens that Hotaro has the perfect mind for figuring out puzzles and although he would rather not waste his time doing so, he has an inability to say no to Chitanda once she shouts her catchphrase: “I’m curious!”. This is not helped by his friends Satoshi Fukube and Mayaka Ibara also joining the club as they’re always more than happy to entertain Chitanda’s quest for answers. 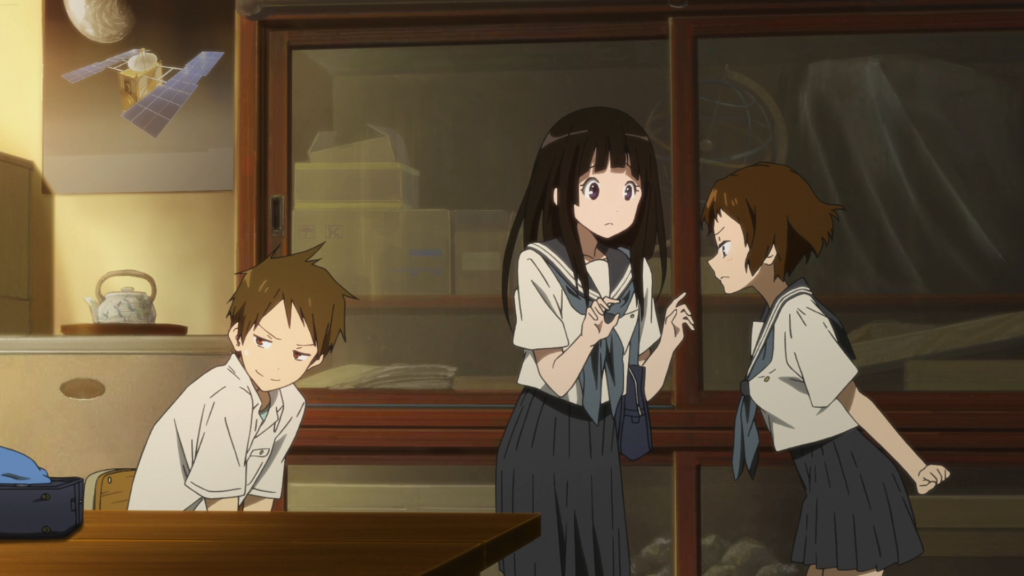 On the surface Hyouka sounds exceptionally boring. An everyday story about a club that gets wrapped up in everyday mysteries. For example, how did Chitanda appear to have gotten herself locked into a room that can only be locked from the outside? The genius of the anime isn’t necessarily found in the plot but in how the mysteries are visually presented and, even more importantly, in the bonds the characters share.

Hyouka has a small cast of leading characters. Although other recurring cast members do appear from time to time, the core four are always Hotaro, Chitanda, Satoshi and Mayaka. All four of them have strong personalities, and they’re all so varied in their perspectives and opinions that they come together and bounce off one another exceptionally well. Hotaro is lazy and wishes not to expand too much effort doing anything, although deep down he’s surprisingly kind. Chitanda has a forever inquisitive (and sometimes energetic) mind but is also the daughter of a well known family, thus comes across as being very mature and dignified. Satoshi coins himself a ‘database of useless knowledge’ and appears to live life free of worry, but deep down he’s actually incredibly jealous of Hotaro’s intelligence and ability to dedicate himself to a task. Finally, Mayaka has a crush on Satoshi and doesn’t like Hotaro’s attitude toward life, and if it weren’t for Satoshi, she probably wouldn’t even be friends with Hotaro. She’s strong-willed, stubborn and prone to getting angry with Satoshi for treating her feelings so frivolously.

Despite the fact that Part 1 of the series only includes 11 episodes, it’s easy to see that the crew changes remarkably thanks to their friendship and interactions with one another. They might be a small cast but that’s one of the biggest things Hyouka has going for it: a remarkably strong collection of characters. 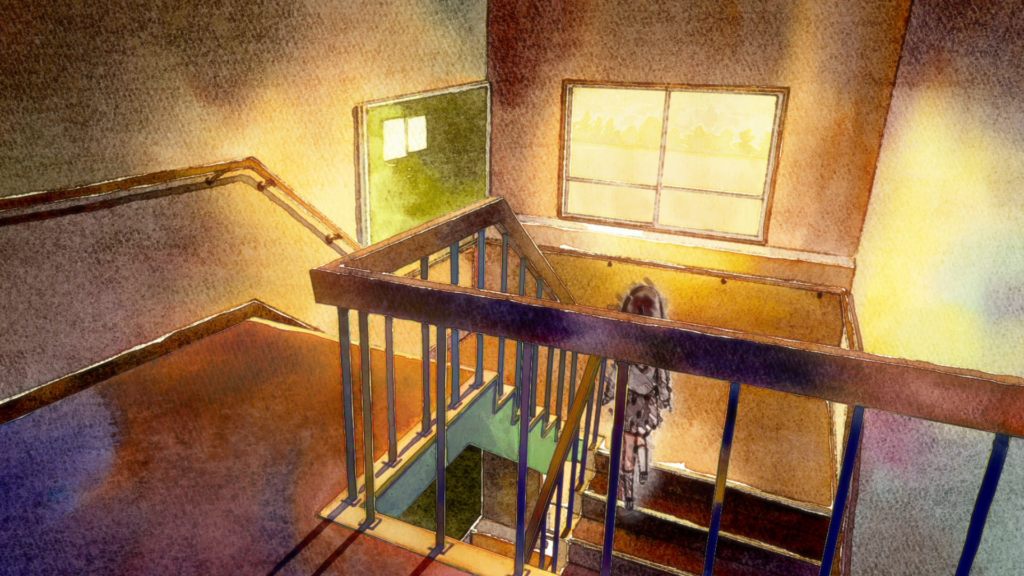 The animation, handled by Kyoto Animation, is also a massive selling point for the series. Even by the studio’s current standards Hyouka looks incredible. A lot of effort has been put into the characters and how their eyes and faces convey emotion – especially for Hotaro, who is naturally reserved and quiet. What I find fascinating is how the the studio uses many muted colours when Hotaro is on his own or monologuing. However, when he’s interacting with others, the scenes suddenly become brighter to convey that his world is becoming more colourful, brighter, and warmer for having become close friends with those in the Classic Literature Club.

Of course all of the above is without me even mentioning the wonderful animation on show for when the cast are working through a puzzle. According to interviews with the director, Yasuhiro Takemoto, he left the style and animation choices for these scenes up to each individual episode director, so each one’s take is completely different: sometimes we have watercolour scenes or sometimes a sort of pop-up picture book presentation. It’s wonderful to watch unfold and true genius on the part of the studio. 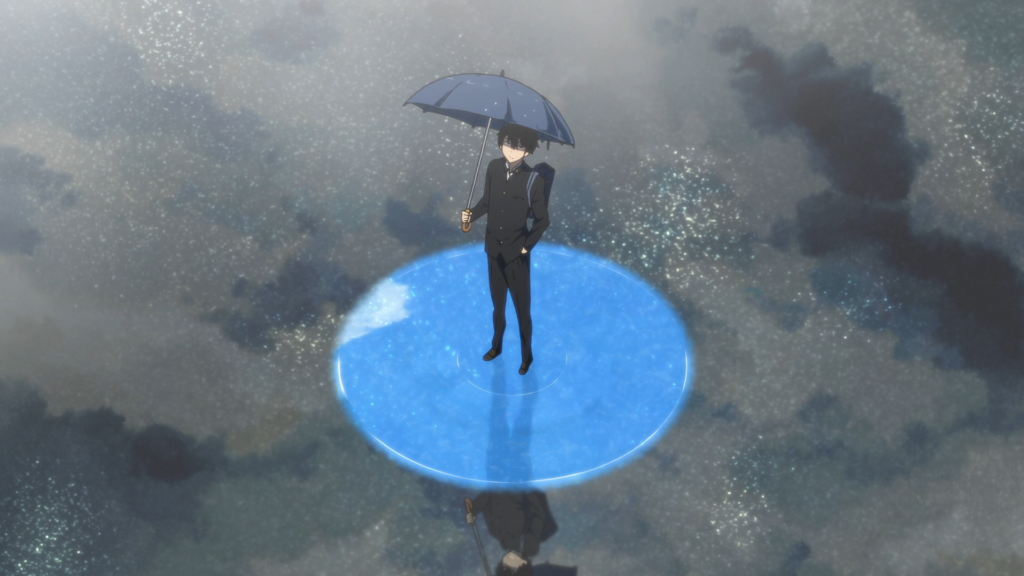 Music has been handled by Kohei Tanaka (Pokémon the Movie 2000, Rosario + Vampire) and is mostly composed of piano and violin tracks. There isn’t a great deal of variation but what there is works well and certainly doesn’t become repetitive. The opening theme is ‘Yasashisa no Riyu’ by ChouCho and is a wonderful tune set to animation that’s splashed with colour as Hotaro is seen interacting with his friends. The ending theme is ‘Madoromi no Yakusoku’ by Saori Kodama, which is a more sombre affair and honestly not very memorable in terms of the song or the animation. 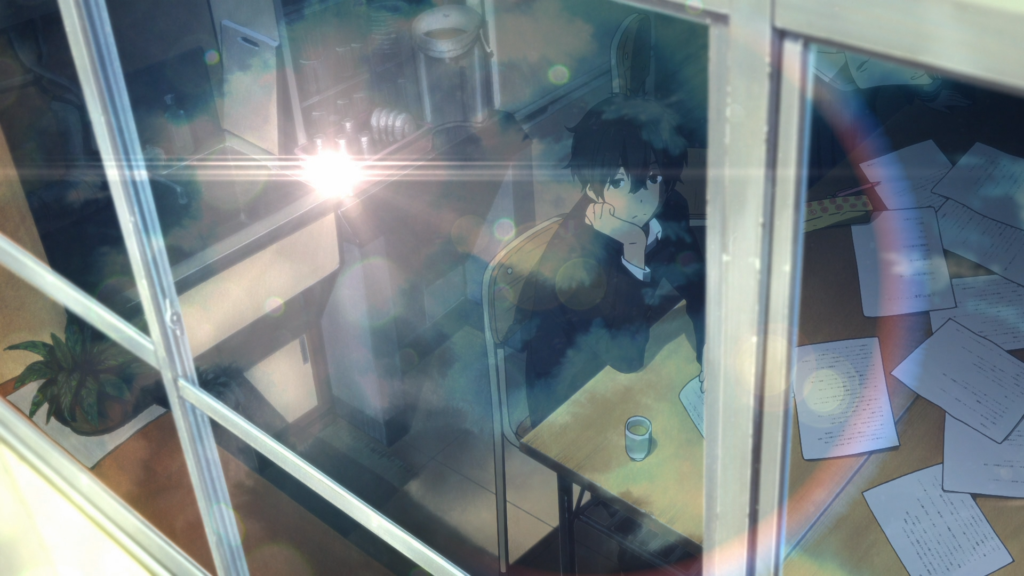 The Japanese voice actors for the series also do a wonderful job, especially Yuichi Nakamura (Gray Fullbuster in Fairy Tail, Kanbe in Recovery of an MMO Junkie, Makoto Takiya in Miss Kobayashi’s Dragon Maid) who plays Hotaro. I believe that Hotaro is an incredibly difficult character to voice given that he’s so reserved but Nakamura manages to slip just enough emotion into his sentences to really make Hotaro a fun and interesting character to watch without ruining his personality.

While there is an English dub included in this release, sadly it’s a disappointment. The majority of the cast are voiced just fine but I have an issue with Chitanda’s actor, Madeleine Morris (Nifa in Attack on Titan Season 2, Sophie Henners in Garo: Vanishing Line). When I watched a couple of dubbed episodes, Chitanda’s voice really stuck out – in a bad way. The voice Morris has used to play this character feels fake and really lacks the oomph that Japanese actor Satomi Sato (Wendy in Fairy Tail, Yukiko Kanzaki in Assassination Classroom) puts into the role. The killing blow, however, is how little enthusiasm Morris injects into Chitanda’s ‘I’m curious!’ proclamation. I think because of the lack of characters and the focus on Chitanda, especially among the four, I can’t say that this is a good dub. The performance just lets the whole thing down and I wholeheartedly recommend that you just watch the show with its Japanese audio. 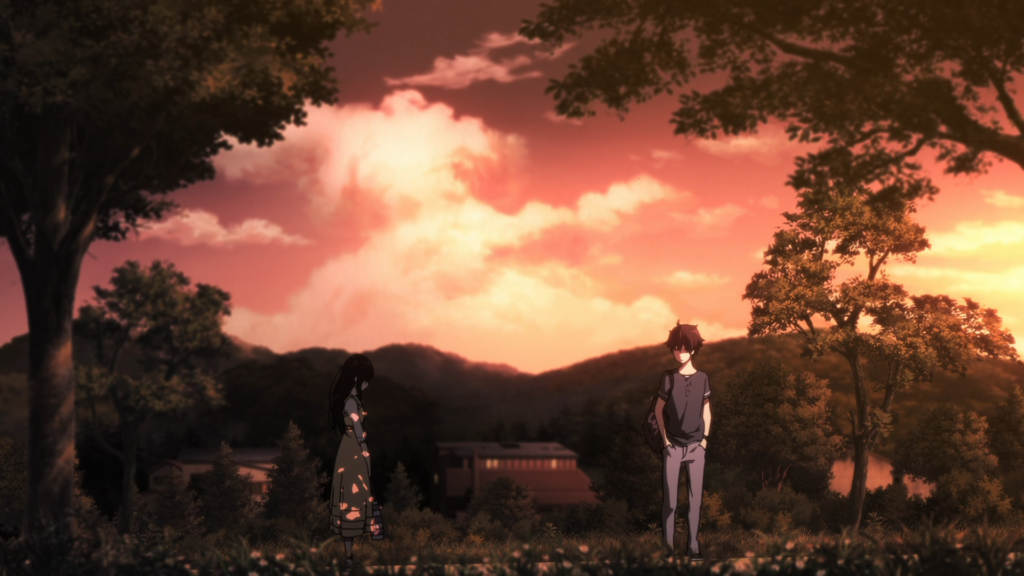 This release comes to the UK thanks to Anime Limited and includes Episodes 1-11 on Blu-ray and DVD, as well as an 11.5 OVA episode and textless opening and ending videos. The release is available as a standard DVD collection and as a Collector’s Blu-ray Edition which comes packaged with six art cards as well as a rigid outer box, which has space for the Part 2 release in the future. Having bought the Collector’s Edition myself, I can say that Anime Limited have chosen some wonderful artwork for the collection and I can’t wait to see what they do with Part 2.

Overall Hyouka remains not only one of my favourite Kyoto Animation series but also one of the best, if not the single best, slice-of-life anime I have ever watched. With a lovable cast of characters, superb animation, and a real attention to detail, the show comes highly recommended by me. It might sound boring on the surface but give it a try and you’ll find something truly fascinating. 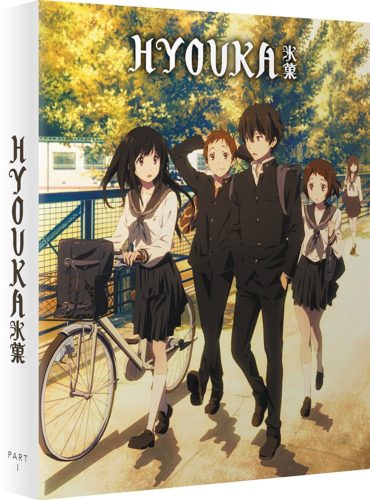 Without putting a single foot wrong, Hyouka works to capture your heart and entertain you with a strong cast of characters and well thought out scenarios. If you’re a slice of life fan or even just a Kyoto Animation fan, this series is for you.