Nekomonogatari (Black) is an interesting case when it comes to the franchise’s timeline as chronologically it acts as a sequel to the very first entry, Kizumonogatari. There is meaning in this madness however, as Nekomonogatari (Black) sets out to tell a story alluded to since Bakemonogatari. This tale is one that follows Tsubasa Hanekawa as she opens up to Araragi about her difficult homelife, a stress which leads to her become possessed by a cat! Meanwhile, Araragi is struggling to sort through feelings he’s had towards Hanekawa lately. Could it be that our hero is in love with our perfect student class president?!

As always when reviewing a Monogatari novel, it’s terribly difficult to talk about the plot because a lot of it takes place toward the end of the book. What I can say is that Hanekawa comes from a broken home. She doesn’t know who her real father is, and her mother – shortly after marrying a different man and giving birth to Hanekawa – committed suicide. Hanekawa’s then step-father remarried but later died from “overwork”, and eventually Hanekawa’s step-mother also remarried – so although the class president currently has two parents, neither of them are closely tied to her. She regards them as strangers and finds her living situation increasingly difficult as time goes on.

One day over a Golden Week holiday, Hanekawa is harmed by her step-father. This injury leads her to open up to Araragi about her situation, something she’s never told anyone before. Although Araragi knows that he can’t be of any help with her home life, once Hanekawa is suddenly possessed by a cat, it seems that he might be the only one who can save her.

While this book might be focused on Hanekawa, the story actually starts with Araragi being rudely awaken by his sister, Tsukihi. The two start off bickering about underwear (yes, you read that correctly), but eventually Araragi asks Tsukihi what it means to be in love. Since the events of spring break (covered in Kizumonogatari), Araragi has begun to have feelings toward Hanekawa. Wondering if this could be signs of his first love, our hero looks to his younger sister for advice to set him on the correct path – but is it really love or simply admiration for someone who helped him so much over spring break?

Going into Nekomonogatari (Black), I was worried that jumping back in the timeline would ruin the light novel somewhat as it cuts out a considerable amount of interesting characters. Thankfully my worries proved to be unfounded as, even with a smaller cast, the chemistry between them leaves a really enjoyable story. If you’re not a massive fan of Hanekawa then you might have some struggles getting into the overarching plot, but even that doesn’t take away from the witty humour and quips made between the characters that really make the book. It’s also nice that newcomers to the world of Monogatari could read this book after Kizumonogatari before the other titles in the series and not really lose anything. The fact that it’s a self-contained story in this one volume, rather than a lengthier commitment like Bakemonogatari (which spans three volumes), is a nice bonus as well. With Monogatari now 23 volumes long, I’m definitely not going to complain about a good single volume story.

When I previously reviewed Nisemonogatari I came away disappointed due to a bad translation, but thankfully Nekomonogatari (Black) sees the return of translator Ko Ransom. Where Nisemonogatari often felt stiff, plain, and a chore to read, Nekomonogatari (Black) is a book that you can get lost in and feel like you’re right there with the characters. There are no typos to speak of either, unlike in Nisemonogatari Volume 2, so I’m really happy that publisher Vertical got Ransom back for this entry and long may they continue working on the series. Further still, perhaps the best thing about reading Nekomonogatari is that it was laden with references to the Bakemonogatari anime, which was airing at the time in Japan. Author NISIOISIN was obviously very inspired by the anime and that really comes through in his writing. It’s a truly wonderful read.

Overall, I have had a great time reading Nekomonogatari (Black). This entry in the Monogatari series rekindled my love for the franchise and now I find myself eagerly awaiting Nekomonogatari (White). It also highlights just how big an impact translation can have on light novels. Nekomonogatari (Black) comes highly recommended from me and I think that anyone who was starting to move away from the series should come back and give this book a try. 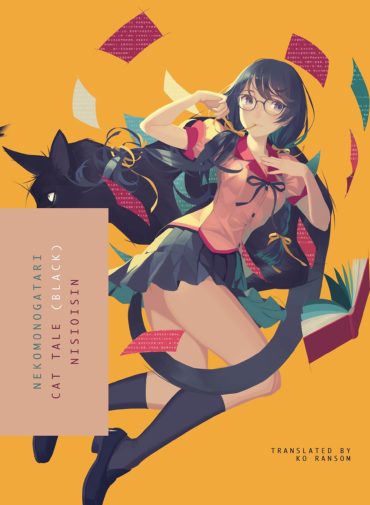