Back in July, publisher Vertical released the first half of the short story collection Koyomimonogatari, which I reviewed for the site. This month I return to cover Part 2, bringing Koyomimonogatari to a close – but is it a satisfying finale? Let’s find out!

This collection includes six short stories, two of which are unimportant to the overarching Monogatari plot while the other four are more relevant. The volume begins with a story revolving around Araragi’s youngest sister, Tsukihi, who’s worried about the rumour of a ghost in her clubroom and looks to her big brother for help solving the case. Skipping ahead to the third story, we see Araragi and Shinobu playing hide-and-seek with donuts, which makes for a peaceful and sweet way to pass the time.

The other four stories in this book tie back into the main story, involving Gaen, Kagenui, Ogi and Yotsugi. They’re rather difficult to talk about without giving spoilers but they are all very interesting. Kagenui’s story involves Araragi challenging her to a fight, to work out how he can protect himself without relying on his vampire powers. Meanwhile, in Ogi’s story, she and Araragi discuss the state of the town and the unbalance caused by Kita-Shirahebi Shrine’s current status.

When I reviewed the previous volume of Koyomimonogatari I complained about Vertical’s decision to cut the book into two parts. I’m not the biggest fan of having volume after volume of short stories, and having now read Part 2, I stand by my words. I think this half of the collection does a much better job of making the stories matter rather than being simple fluff pieces with our cast, but that doesn’t completely alleviate my feelings.

However, because of this it does mean that you can’t just skip Koyomimonogatari altogether. It’s certainly a double-edged sword because I think some readers are going to struggle to stick it out for two books of this, but perhaps the reveal right at the end will make you feel like it was all worthwhile…

Away from my problems with the release, I have enjoyed my time with Koyomimonogatari. Author NISIOISIN has a sense of humour that meshes well with my own and I do love the interactions between Araragi and the cast within these stories. My firm favourite is Shinobu’s donut episode, where she so eagerly bickers with Araragi over keeping all the treats to herself.

I’d also like to give a nod to the series’ illustrator, VOFAN, because they’ve delivered some truly wonderful images for Koyomimonogatari. The Monogatari novels don’t usually have pictures apart from a single insert and the cover, but over the course of these two books we’ve had a much bigger selection that capture the cast very well.

As previously mentioned, this release comes to the West thanks to publisher Vertical. Like Part 1, this part has been translated by Daniel Joseph, who’s done a wonderful job conveying NISIOISIN’s witty dialogue. Next up for release is Owarimonogatari – due out in December.

Overall, Koyomimonogatari has proven to be an entertaining read. While it’s not the best in the series, the final couple of stories included in Part 2 make up for having to read through two volumes of otherwise unsubstantial tales. Hopefully the long wait for the next full instalment will be well worth it. 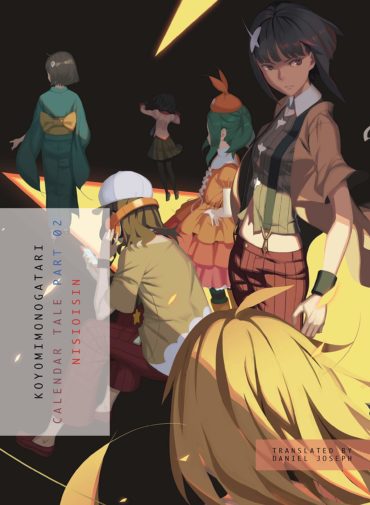