While finishing off the latest localised instalment in the Monogatari series, I realised that I’ve now read and reviewed eleven volumes of the series for Anime UK News – which I feel is a noteworthy milestone. Throughout that time I’ve had my ups and downs with Monogatari, and sadly in my last review (which featured Hanamonogatari) I was disappointed with what I found. This month I’m back to tackle Otorimonogatari with the hopes of it improving on the previous lacklustre tale. Let’s find out!

Following the trend of recent stories being narrated by a different character from book to book, Otorimonogatari revolves around Nadeko Sengoku. It’s been a while since Nadeko was given the limelight as she hasn’t had her own story since back in Bakemonogatari! Back then Nadeko was saved by Koyomi Araragi from a terrifying snake curse, but lately her life has been peaceful.

Nadeko has been living an ordinary, middle schooler’s life – that is, until she suddenly starts seeing snakes again: snakes that no one else can see and that disappear without a trace! It’s long been said that once you’ve been involved with an aberration, others become drawn to you as well. Is this the case for Nadeko, or is she hallucinating? One thing’s for sure, we’re in for an intriguing journey of self-discovery!

One of the most interesting things about Otorimonogatari is that Nadeko’s a character we’ve previously not had the chance to get to know. Sure, she might’ve had a whole story focused on her but Nadeko is extremely shy and quiet. She says so little that most of her Bakemonogatari story is driven by Araragi. As it turns out, Nadeko is actually quite an interesting girl. She may be quiet but her inner thoughts are far from the polite and meek appearance she projects! We also discover that she’s deeply in love with Araragi (despite him having a girlfriend) which, while unexpected, is a driving force behind many of her actions.

The other nice thing about this book is that it never lets you catch your breath. Right from the start the plot moves along at a pleasant pace without pointless distractions or interruptions, and this continues right up to the final pages. It’s very different to the stories told by Araragi, which never seem to go anywhere until the end, and it’s a refreshing change. The humour we’ve come to know and love is mostly absent here, with Otorimonogatari taking itself a lot more seriously than most entries in this series, but that actually works for it. Nadeko is not a comedic character and she doesn’t talk enough to fit the usual quirks of Monogatari’s writing, so it’s definitely better not to have tried.

Having said all of that, there is still an interesting narrative approach going on throughout Otorimonogatari. Nadeko almost always refers to herself in the third person. While not an unusual approach for young characters, initially this threw me out of the immersion of the book, wondering if there was a second character present giving us some of the dialogue, but eventually I realised it was just the awkward way that Nadeko talks. For some inexplicable reason Nadeko never capitalises ‘I’s’ either, which makes the text look quite amateurish but is probably born from trying to convey something from the Japanese text which didn’t quite work out.

Originally I wondered if this was just a poor translation, but everything else was of the quality I expect of Monogatari releases. My mind was also eased by noting that the translator for this volume was once again Ko Ransom, so this really was all just an oddity of Nadeko’s. Once you understand what’s going on, and why, it’s a perfectly good read, but I imagine most readers are going to be thrown off in a similar way as me to begin with.

This release has been brought to the west by publisher Vertical and as previously mentioned has been translated by Ko Ransom. The front cover illustration and colour insert have both been drawn once again by VOFAN and look fantastic. The cover features Nadeko being encircled by a snake against a black background, which is very striking and perhaps one of my favourite illustrations so far. No problems to be found here!

Overall Otorimonogatari is an odd entry in the Monogatari series. Due to the toning down of the comedic aspects and use of a third person perspective, this is a very different Monogatari to the usual. I certainly enjoyed my time with Nadeko but have no lingering attachment to Otorimonogatari and feel other readers may come away with a similar feeling. Either way this instalment is an improvement on Hanamonogatari, so I’m happy for now! 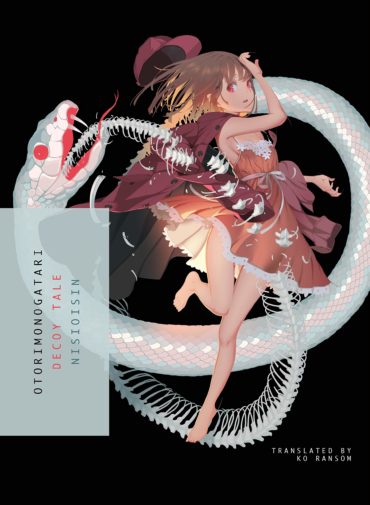