High school has not gone well for Kinichiro Imamura. His bleached hair and scowling expression haven’t helped him make any friends. As he turns up for the graduation ceremony, he’s not sorry to be leaving – unlike Aki, a cute girl from his year with academic achievements and a boyfriend. These two opposites have an unfortunate encounter which lands them both at the bottom of a staircase – and when they come round, they’ve skipped back a whole three years and find themselves starting high school all over again. Is this Imamura’s chance to get things right? He’s got all his memories (and they’re not fond ones) of what went wrong before. And he’s faced with the chance to change his one regret: not approaching Yoshiko Usami, the charismatic captain of the school ouendan (cheering club). It turns out that the school also has a dynamic and successful cheerleading club (girls only!) but the traditional ouendan (with its first-ever female captain) is not a success. But the instant he volunteers to join, he sets in motion a series of events and encounters that will deliver him a very different second chance at getting his school life right and making himself some important, character-building memories.

How would you react if you found yourself reliving your final years at school (from 15 to 18)? Mitsurou Kubo shows us two very different students faced with just this dilemma: successful, popular Aki and unmotivated, friendless Imamura. It’s hard not to sympathize with both of them, although for very different reasons. Imamura is deeply suspicious of his classmates – and with reason, as they’re sure (still) that, with his dyed hair and fierce scowl, he must be a delinquent. Kubo captures the lively atmosphere and energy of high school brilliantly, as well as evoking the complex web of relationships lurking beneath the surface. So when Imamura gazes around at his fellow First Years at the opening ceremony and thinks of what happens to them by the time they graduate, he has more than enough motivation to make a fresh start.

This isn’t the first (and won’t be the last) manga to explore the consequences of being given a second chance to do things better – and at least when Aki and Imamura have their life-changing fall on the stairs, they don’t swap bodies (amusing as this plot variant is, it’s been done too many times of late). Some mangaka deliver great pictures but muddled storytelling; fortunately, Kubo understands how to convey her tale engagingly and clearly through her graphics, so this first volume makes for a good and unmuddled read.

Again!! is the first of Kubo’s manga to be published in translation (Moteki: Love Strike is coming in April) and first appeared in a shounen magazine. Kubo is the co-creator of the anime TV series/media sensation Yuri!!! on Ice and was responsible for the original character designs. So it’s inevitable that there’s much interest in reading her early work (and hard not to be tempted to look for any links with YoI, no matter how tenuous!). Her gift for portraying facial expressions and reactions is shown to good effect here. Imamura makes for a surprisingly engaging – if somewhat unlikely – main protagonist and it’s going to be fascinating to watch him change and grow. It’s not going to be easy for him as he’s erected so many protective barriers during his teenage years that it’s going to be painful – although ultimately, the reader hopes – fulfilling for him to have them stripped away, one by one. Will he give himself a second chance? Or will he retreat once more into his shell of indifference? One thing’s for sure; the strong dark brows and passionate, manly nature of Yoshiko Usami have captured his heart – although he doesn’t yet understand why or how he’s going to deal with these unexpected feelings.

The translation for Kodansha Comics is by Rose Padgett and flows well; there are helpful Translation Notes at the end, as well as an afterword by Kubo. The edition is in the larger trade paperback size, with four colour pages as a bonus at the front.

It’s early days in this twelve-volume series, but if Imamura’s story continues in this vein, it will make for an engaging read. 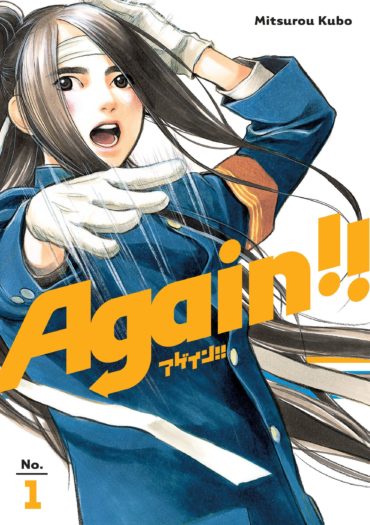