“The real persuaders are our appetites, our fears and, above all, our vanity. The skilful propagandist stirs and coaches these internal persuaders.” – Eric Hoffer

Momotaro, Sacred Sailors, also sometimes known as Momotaro’s Divine Sea Warriors, is most famous for being the very first anime feature film, running for 74 minutes and being released in April 1945. The date is the second most famous reason the film is noted.

No matter how much you want to appreciate this film, you can’t forget that it was commissioned by the country’s Naval Ministry as a piece of propaganda, aimed at children. Before the film begins, a warning appears on screen saying: “Despite ‘MOMOTARO, SACRED SAILORS’ being a classic example of wartime propaganda, it remains a very important work in the realms of Japanese animation history.”

It’s therefore hard to be totally objective when writing about this film. Reviewing Momotaro is akin to reviewing something like Leni Riefenstahl’s Nazi propaganda film Triumph of the Will or D. W. Griffith’s The Birth of a Nation which features the Ku Klux Klan as the heroes. Nevertheless, review it I must. 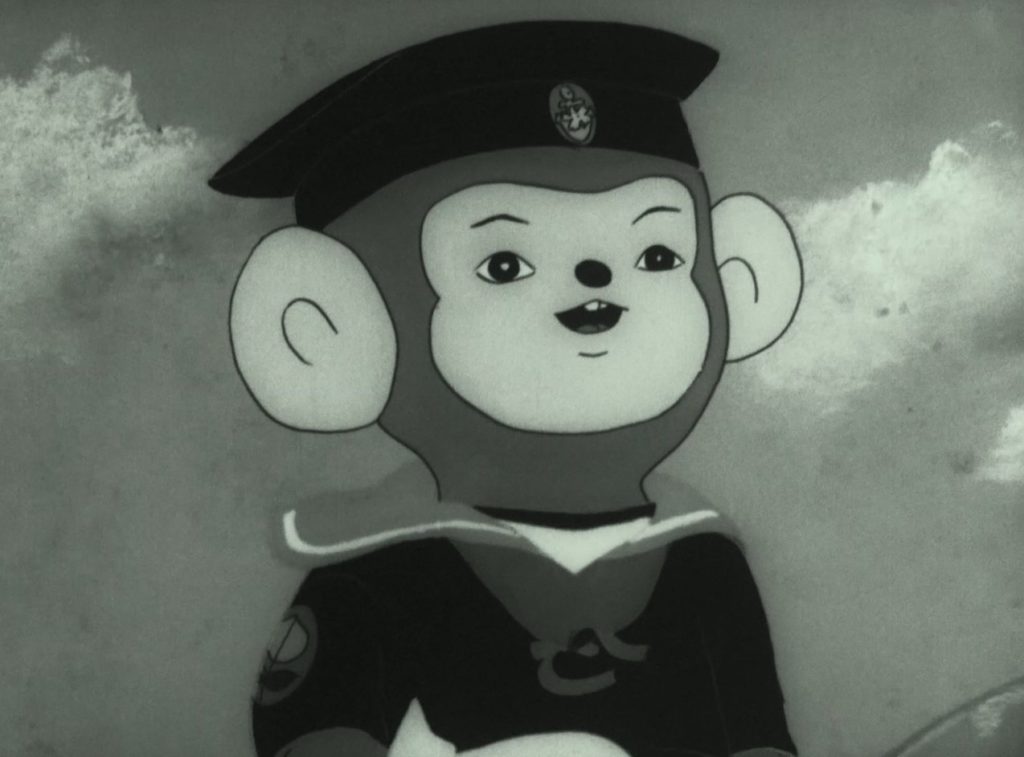 The film begins by following four animals: a bear, a monkey, a puppy and a pheasant, who have just completed military training and are about to go into normal military service. Under the command of the human Momotaro (a figure from classic Japanese children’s stories), they plan to launch an attack on Devil’s Island using parachute troops, of which the four animals are among the contingent.

Most of the film’s dialogue is in the form of songs, which seem to be there to make the film jollier than it is, along with all the cartoon animals. Annoyingly, not all the dialogue for the songs is displayed, with the longest song in the film seemingly going without subtitles – and you can only watch this film in subtitles (choice of English or French dialogue).

In terms of the film quality, it is obviously not the best. This is partly due to the way the film was made, by different teams working separately rather than together. On top of that, there was the issue of the film being missing-presumed-destroyed, with it only being found again in 1983 (which as The Anime Encyclopedia points out, was ironically the year the pacifist Barefoot Gen was released), and then restored from the found footage, so the remaining footage is not of the best quality either.

However, the biggest problem with the film is obviously the propaganda. Before the attack there is a breakaway from the main plot, where the narrator of the film talks about the island of the Japanese attack, once part of Goa, being invaded by a black ship. The “black ships” is the term used by Japan for western vessels entering Japan when the country had shut its borders, and in the film the black ship is portrayed as a pirate ship. 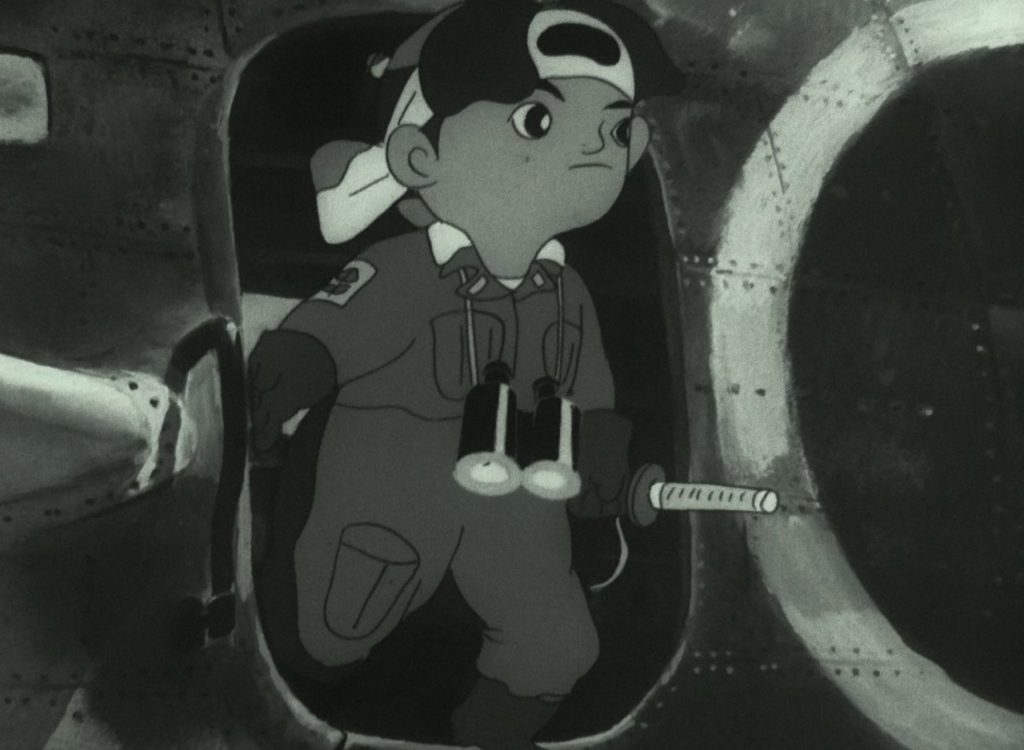 On top of this are the devils themselves. The film makes reference to western cartoon characters and portrays them as devils – namely Popeye and Bluto. It is not the first time Bluto appeared in an anime however. Sacred Sailors is actually a sequel to the 1943 short film Momotaro’s Sea Eagles, and the devil Bluto appears in this too.

Then there are the commanders, who are British and speak in clear-cut upper-class English accents. Whether they got actual English POWs to voice the parts is unknown as details of the cast are not known. Back in the animals’ home, children are seen parachuting onto a map of the USA, indicating it as the next target.

Is this a film that you can enjoy watch? No – it is a truly disturbing film, that was aimed at children. Not that many children watched it at the time however, as the war was nearing its end and thus the target audience were not really able to see it. Having said that, as a document to the period, and as a piece of cinema history, it is a movie that any student of anime has to watch. In terms of the genesis of anime, Momotaro is it.

Regarding extras, it comes with a booklet by Jonathan Clements covering the career and the films of  author and director Mitsuyo Seo. On the discs, there is only one extra, which is another anime. When Momotaro did get a release, it was bundled with another anime, the 1943 16-minute short The Spider and the Tulip. In this, a spider tries to trap a ladybird in its hammock-like web, while the ladybird seeks shelter inside a tulip. Like Momotaro, this anime also has its problems, but in this case the spider is portrayed with racist blackface. 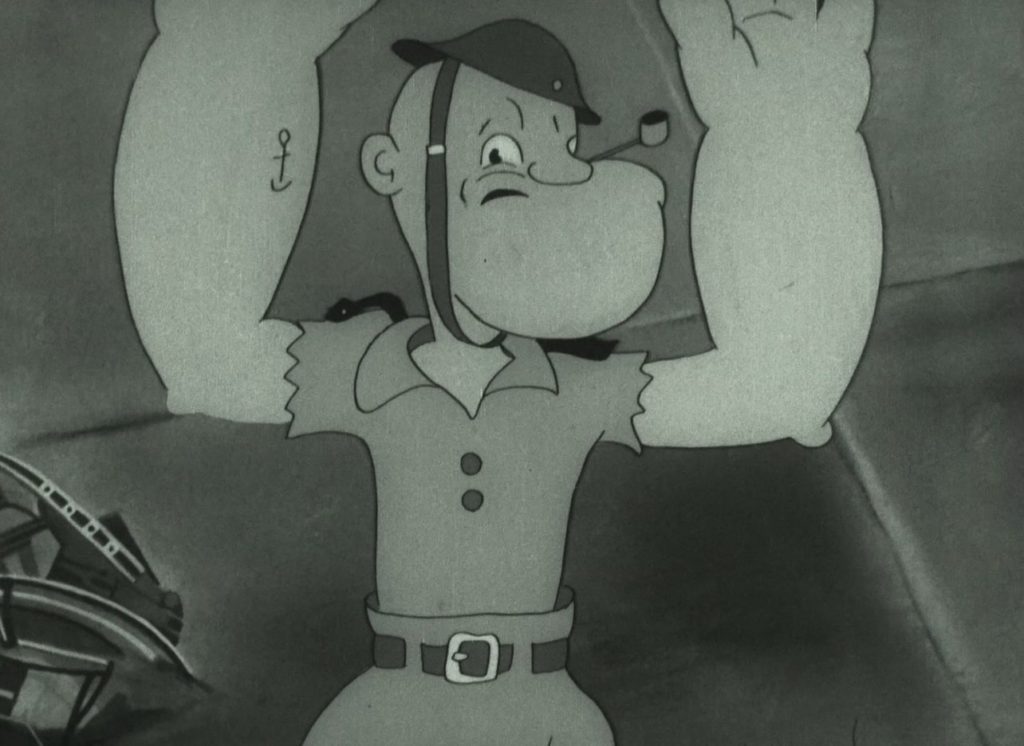 Momotaro, Sacred Sailors is a film where the main area of interest is an academic one. If you wish to know more about the early history of anime, then this is where you should go. All The Anime should at least be praised for bringing out this release and giving us in the UK the chance to see the earliest anime.  Hopefully it will motivate them into releasing other early anime like Astro Boy for example. Remember, however, that this film has a dark side that it will never be able to shake off. It is for those reasons I feel it best not to give the film a rating, as it feels wrong to give a score out of ten to such a work. 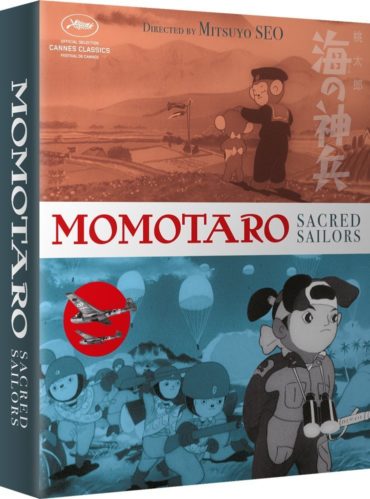