Mamoru Hosoda’s films are always special, but this one has a particular reason to be so. It became the first anime feature film outside of Studio Ghibli, to be nominated for an Oscar. It didn’t win, obviously (damn you Spider-Man: Into the Spider-Verse!).

Mirai (meaning “Future”) is still a good film, in spite of what certain American awards panels may think. Hosoda may not be held in as high regard as Hayao Miyazaki yet, but there is no doubt that he is on the way to being so.

The film revolves around a typical Japanese family, with the central character being a four-year-old boy named Kun. His father is an architect who built the house they live in, basing it around a tree in their garden. His mother is an executive who has just returned from hospital, having given birth to Kun’s baby sister, later named Mirai; Mirai is recognisable due to a birthmark on her right hand and wrist. Along with them, the other resident of the house is Yukko, the pet dog. 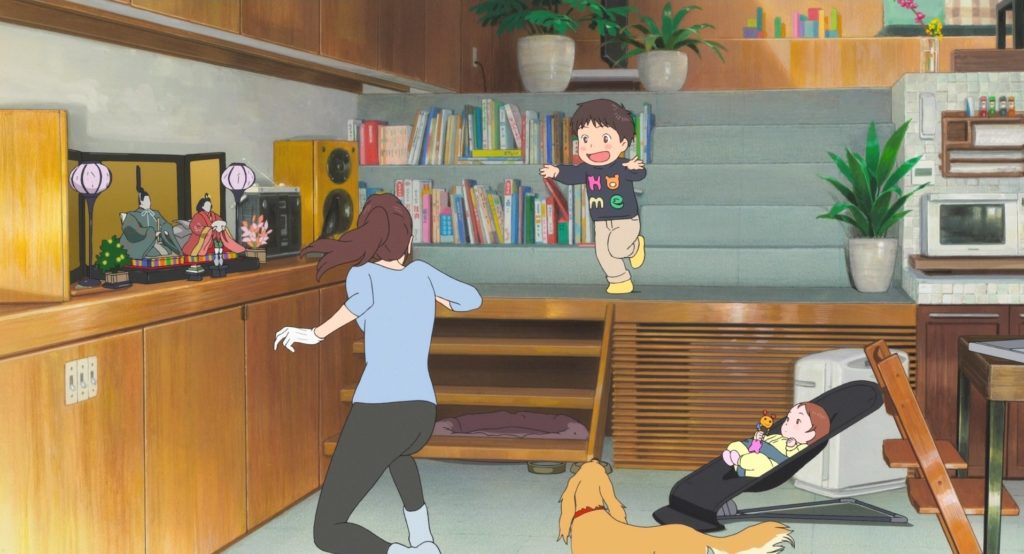 While at first Kun is friendly to Mirai, he soon becomes jealous of her, annoyed by all the attention she gets from the parents. He even threatens to hit Mirai with his beloved toy trains. While having one of his temper tantrums, he goes into the garden where the tree suddenly glows. He then finds himself transported to a new garden inside a ruined building where he meets a man who claims to be the “prince” of house, ignored by his parents just as Kun is. Eventually Kun discovers the man’s identity – he is Yukko the dog in humanoid form. After having some fun with Yukko, Kun begins to calm down, returning to his normal world, and telling the parents of Yukko’s concerns about the family.

This is the first of several fantastic trips that Kun makes whenever he goes into the garden at a moment of tension. His next trip sees him in a massive greenhouse where he meets an older, future version of Mirai, who tells Kun about the responsibilities he will have as the older sibling. They also unite with the humanoid Yukko to clean up some dolls put out on display on Girls’ Day, because the longer they remain out, the longer she won’t be able to marry in the future.

More trips across different periods of time show Kun travelling further back into the past to meet his mother as a child, his late great-grandfather who was injured during World War II, and Kun’s future self. Each trip sees Kun learning about those around him, developing a better understanding of his family, and eventually coming to terms with living with his baby sister in the here and now. 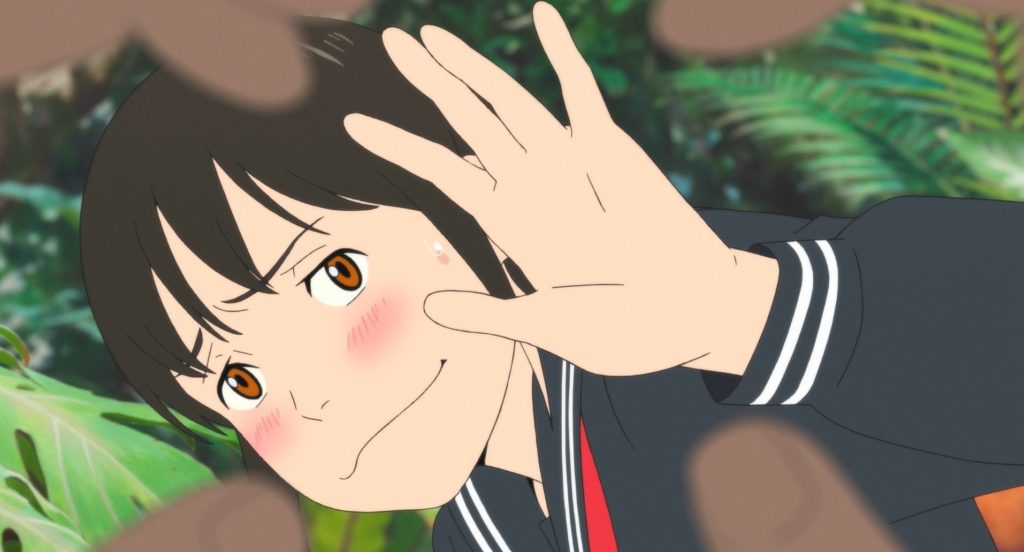 Although Mirai may be the title character, it is Kun who is the main appeal of the movie. Perhaps ironically named, given that “kun” is the suffix given to younger siblings when actually he is the older brother, it is Kun’s sense of frustration, wonder and bewilderment as he witnesses these visions that grab your attention. It feels weird to call it a “coming-of-age” story given that the main protagonist is just four, but over the course of the film we do witness the boy slowly growing up.

Now, while the film has been generally praised by critics, some have criticised Mirai too. Some say that the film shows a lack of realism because a boy having the fantasies like Kun has in the film, which include being swarmed by a school of fish or visiting a scary train station, is unrealistic. It’s a fantasy film, of course, so it’s not going to be realistic!

Others complain about gender roles in the film, with the father having to become a stay-at-home dad who is typically clumsy at all the household tasks, unlike the more competent mother. While some might accuse the film of sexism, it should be noted that the other scenes show more tolerant attitudes towards certain activities. For example, the mother is frequently depicted breastfeeding Mirai during the film. The fact that the film still has the family-friendly PG certificate shows that this aspect of life is becoming more accepted to be shown on screen. In terms of personal criticism, my main issue would be with the English-language dub. Jaden Waldman, the voice of Kun in English, doesn’t sound convincing as a four-year-old child. Interestingly, when you play the film, the default audio setting is the original Japanese. 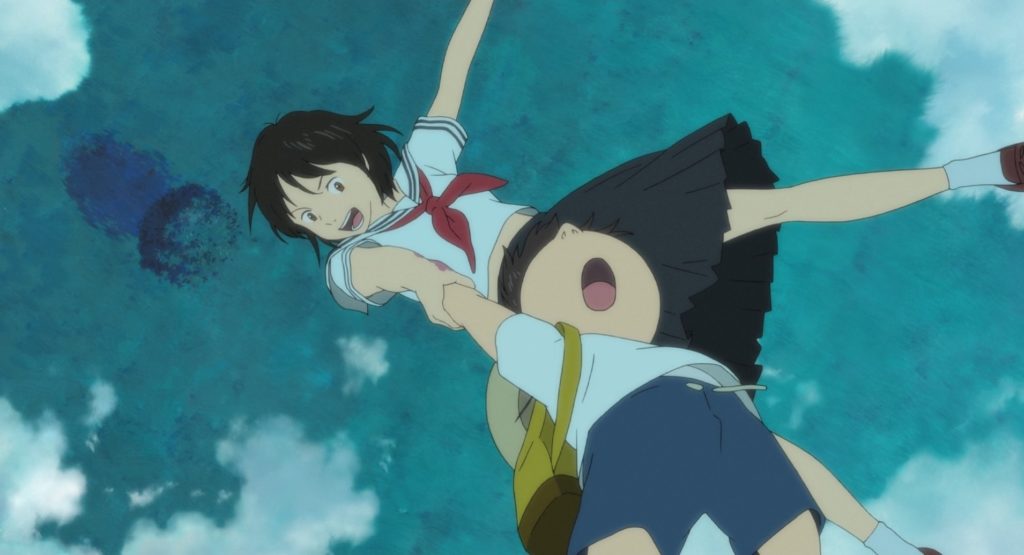 Elsewhere in the movie, the animation, including character design and background design, is of high quality, and the soundtrack is impressive. Most of the music has been composed by Hosoda’s frequent collaborator Masakatsu Takagi, who also provided the scores for Wolf Children and The Boy and the Beast. The opening and closing theme songs, “Mirai no Theme” and “Music train” respectively, are performed by Tatsuro Yamashita. Out of the two, the opening theme is to me the more enjoyable.

One issue that some British anime fans have brought up is the lack of on-disc extras in All the Anime’s release of Mirai. Releases in the USA and France feature interviews and profiles of Hosoda, interviews with the cast, and a look at the film being screened at Cannes. The British release’s only on-disc extras are two trailers for the film (the US and UK versions).  While the Collector’s Edition of Mirai still misses the extras other nations have, it comes with others. The extras in this collection include an A3 replica of the original Japanese poster, art cards, a CD of the soundtrack, and a 40-page booklet covering the film. However, there will still be people who will feel short-changed by this release.

The film itself though is still an entertaining and charming watch. It is perhaps not my favourite film directed by Hosoda, but it is still worth visiting. 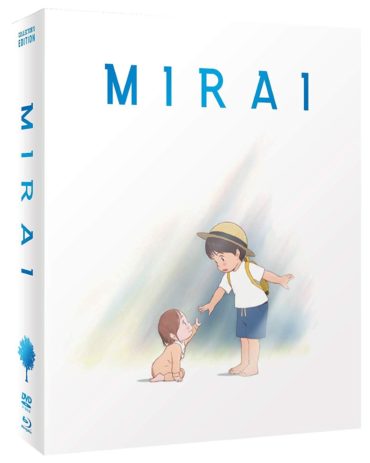