Last month I excitedly reviewed Nekomonogatari (Black), and now I return to review the second part of this two-part series, Nekomonogatari (White). Will another Hanekawa-focused story leave me spellbound or exasperated with these cat-induced antics?

This volume of Monogatari marks a significant first for the franchise as it’s the first book that’s not told from Araragi’s perspective! Instead of our usual quip-loving idiot, we’re told this story by Tsubasa Hanekawa, who one day encounters an unfathomable tiger while on her way to school. Shortly afterwards, her home burns down and Hanekawa must work out how and why this is connected to the tiger. With Araragi otherwise busy on a different mysterious case, she’ll have to figure this one out on her own.

Although Hanekawa has been featured in many Monogatari books to date, we’ve never really had a clear idea of what happens in her head – or the friendships she has beyond Araragi. One of the best things Nekomonogatari (White) does is flesh out what Hanekawa thinks about the world at large, but also that she has a surprisingly close friendship with Araragi’s girlfriend, Hitagi Senjougahara.

All of the female cast members in this series are strong characters and are by no means ever outshone by Araragi, but to take Hanekawa and Senjougahara aside on their own makes for a really interesting story. The two are worried about what Araragi is up to but they’re also not going to wait around to be saved. After Hanekawa is left homeless, Senjougahara temporarily takes her in, during which time she also helps Hanekawa figure out how to solve the tiger conundrum.

If you’re an existing fan of Monogatari then you’ll already be aware of how large its cast is. While this entry takes place in the present day (the author even considers the book the first in the Monogatari ‘second season’), we don’t see much of anyone beyond Senjougahara and later, Araragi’s sisters. While this is a shame for readers who might be getting bored of the Hanekawa focus, I’m glad that author NISIOISIN doesn’t try to shoehorn every cast member into stories that they wouldn’t fit in. It might mean less screen(page)-time for fan favourites but it works out better in the long run.

The nice thing about this volume is that it also affirms how strong a writer NISIOISIN is. While we’re used to having a drastically different character tell us the story, Hanekawa’s perspective feels very natural. Her way of describing situations and her inner thoughts are very different to how we’d hear them from Araragi, but the quality of writing on NISIOISIN’s part is still exceptionally strong. We may have a few less quips and outward fanservice, but the fourth wall-breaking humour and general comedic antics are still present and well. Not having Araragi at the helm also means we get through the plot much more quickly and everything doesn’t feel quite as back loaded as Monogatari usually does – which makes for a welcome change.

Nekomongatari (White) has been made available in English thanks to Vertical Comics and is once again translated by Ko Ransom, who has done an excellent job. It’s also worth mentioning how striking the artwork for the front cover of this volume is, as well as the illustrations found within – all thanks to illustrator VOFAN. There is less artwork on offer here than in some of the other books in the franchise but what’s present looks wonderful.

Overall Nekomonogatari (White) successfully offers a change of pace in a well-loved franchise. After this I’m keen to see more volumes told from the perspectives of other characters, although it’ll still be nice to see another adventure with Araragi. One thing’s for sure, Nekomonogatari (White) leaves me excited once again for the next entry in the Monogatari series. 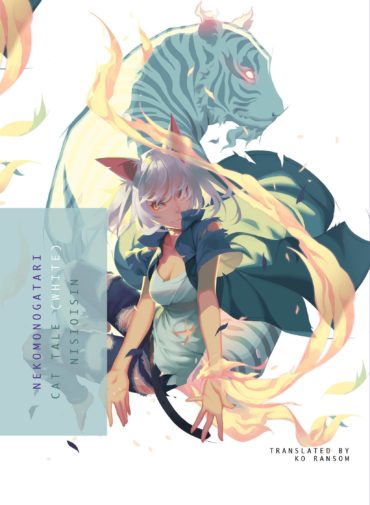 Monogatari is a series that, as a whole, largely passed me by, because I watched a couple of episodes of Bakemonogatari a few years ago and couldn’t get into it. However, last year I had the chance to watch Kizumonogatari at the Leeds Film Festival, and since then I’ve gone on to read the Kizumonogatari … Continued