When we last left Araragi and friends, we were a single story away from the end of Monogatari’s second season. However, before we get there, we’re taking a step back to a time before Otorimonogatari (the previous volume). Araragi returns to narrate a story that sheds light on Shinobu’s past; a tale that is both parts fascinating and downright heartbreaking. Today I’m here to take a look at this latest entry in the Monogatari universe: Onimonogatari.

Our story this time takes place just after the events of Kabukimonogatari and just before Hanamonogatari (although towards the end the two stories vaguely overlap). Onimonogatari sees Araragi and Hachikuji spending some quality time together. Araragi wants to reunite Hachikuji with the backpack she’d previously left at his house (back in Kabukimonogatari), but after doing so the two are faced with a mysterious enemy that can only be described as “Darkness”: a force whose goal seems to be to swallow our heroes alive, never to be seen again. Rather than stand and fight, Araragi chooses to flee and drags Hachikuji along with him, but the Darkness is persistent. Thankfully, just as they’re about to be eaten, the two are saved by Yotsugi Ononoki.

Taking up camp in the abandoned cram school that so many of our stories have been set in, Araragi waits for Shinobu to awaken and offer advice on what they should do from here,  trusting her knowledge on all things supernatural in Oshino’s absence. However, when Shinobu explains that she once faced Darkness as well and ultimately couldn’t defeat it, it looks like the friends are up against their most difficult challenge to date. Just what is the Darkness and why does it appear to be following Araragi and Hachikuji? The answers will haunt us until the end of Monogatari, no doubt.

While I opened this article by saying that Onimonogatari is a story about Shinobu, that’s only half accurate. You see, Shinobu’s story, which is set in the past, takes up the middle of this volume and thus is incredibly difficult to talk about without spoiling what’s happening in the present for Araragi. Broadly speaking, this tale both sheds light on the Darkness while also finally telling us about Shinobu’s first Thrall, a tale set four centuries ago when Shinobu first came to Japan. It’s a fascinating read and even though Shinobu cliff notes much of what happened (because she ‘doesn’t remember’ that far back), it really gripped me in a way that only Shinobu’s stories can within this universe. Her past is rooted in fantasy, a lot more deeply than Araragi’s stories are, and they open up the opportunity for author NISIOISIN to do something different to his usual conversational stories.

This volume spends a great deal of time making jokes about the ‘anime adaption’ and the state of the media industry in Japan as a whole. There’s even a joke about how many long-running shonen series just never end now. On the whole this is humour that I really enjoy, and it’s something that Otorimonogatari and Hanamonogatari stripped out due to it being unique to Araragi. I’m both glad to see the comedy return in this volume and that NISIOISIN can still pull it off so well. It made the volume a joy to read, which I found surprising actually. Initially I hadn’t been excited for Onimonogatari. I just saw it as something that was getting between me and the end of the season, but ultimately that didn’t matter.

This entry in the series comes to the West thanks to publisher Vertical Comics. Translation has once again been handled by Ko Ransom, which is problem-free and offers another smooth read. There’s one colour insert image, and both it and the cover illustration have been handled by VOFAN. I’m especially fond of how bold and striking the red cover is, coming after Otorimonogatari which was black and more subdued in colour.

Overall, Onimonogatari places itself among my favourite entries in the Monogatari series for giving us another story with Shinobu and Araragi. It’s about time that more of Shinobu’s past was uncovered, which proves to be an equally entertaining and insightful read. You can rest assured that everything you know and love about Monogatari is still present and accounted for. 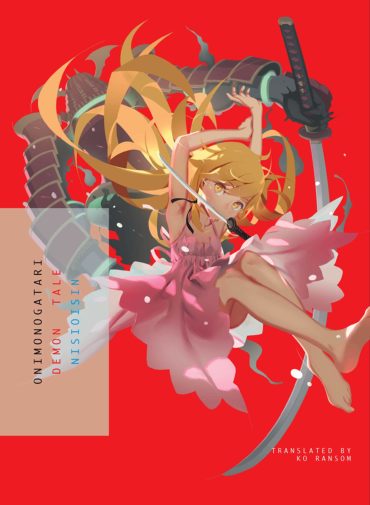